WORLD State of the race: Trends clearer for midterm elections as November nears

State of the race: Trends clearer for midterm elections as November nears 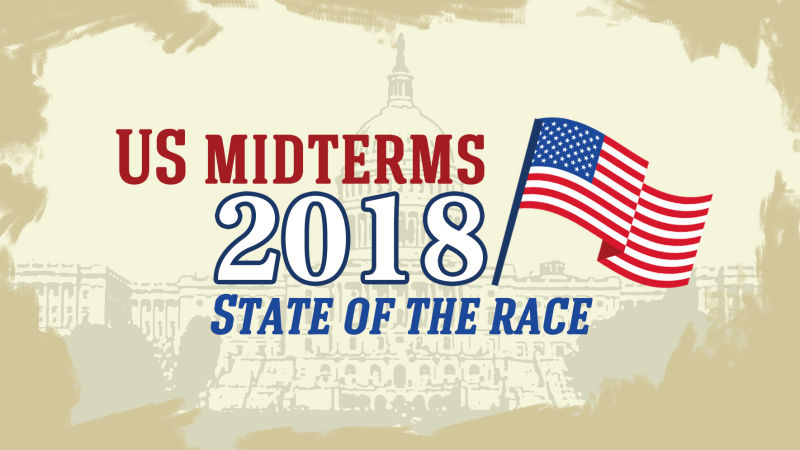 The recent suspicious bomb packages hardly brought any change to the voters' consideration, with campaigns continuously focused on early voting and base turnout. Despite cable television coverage and #fakebombs trending on Twitter, Democratic candidates were still pinning their fundraising appeals to health care, while Republicans were rallying base voters around taxes and the threat of impeachment.

US economy rose at a 3.5 percent annualized rate in the third quarter, the government announced on Friday, outpacing expectations and providing the president's party with a potential boost just ahead of the midterms.

Democrats outraised Republicans in about 90 percent of the most competitive House districts in the country in the first 17 days of October, disclosures to the Federal Election Commission showed.

The Democrats have extended their lead over the Republicans in the generic congressional ballot, an indicator averaging how people say they would vote in an election irrelevant of district or state.

The latest calculation from FiveThirtyEight puts the Democrats 8.2 points ahead of the Republicans with 50.1 to 41.9 percent.

The percentages for both parties increased – Democrats by 0.4 percent and Republicans 0.6 percent – indicating more voters are making up their minds as the election approaches, as well as a clear trend to the Democrats.

CNBC analysts say a 12-point gap would probably be required for a "blue wave" – Democratic victories in both houses of Congress – while a six-to seven-point margin would probably be needed for the Democrats to take just the House.

Donald Trump isn't on the ballot on November 6, but midterm elections are a referendum on the sitting president – 60 percent of people see their vote as an expression of opposition or support towards the man in the White House, according to a September Pew Research Center poll.

A president's party nearly always suffers a net loss in midterm elections – Gallup's polling history shows that presidents with approval ratings of below 50 percent have seen their party lose an average of 37 House seats in midterms.

Trump's approval rating of 42.4 percent on October 26, according to a FiveThirtyEight calculation of multiple polls, was up 0.2 percentage points a week earlier.

All 435 seats are up for election in the House, where the Republicans currently hold a 235-193 majority (seven seats are vacant). To take control of the House, the Democrats need a net gain of 23 seats.

The latest update from The Cook Political Report moves three solid Republican seats to the likely/lean, meaning a further 52 are competitive. Only three Democratic seats are toss-ups and 10 more are considered competitive. The seats for the Democrats have remained unchanged this month.

FiveThirtyEight's latest forecast gives the Democrats an 84.6 percent (up from 79.1 percent a week ago) chance of winning control, and the Republicans a 15.4 percent (down from 20.9 percent) chance of retaining a majority.

Thirty-five seats are up for grabs in the Senate, where the Republicans hold a slim 51-49 advantage. The Democrats only need two seats to take control of the chamber but the Republicans are in the box seat – they are defending nine seats and attacking 26.

Those numbers make it hard to imagine a "blue wave" happening in the Senate. Even worse, ten of the Democrats are running for re-election in states where  Trump won in 2016.

The latest update from The Cook Political Report shows no change of the Republicans from last week. Six of the 26 Democrat-held seats are toss-ups, one more moved from the likely/lean category compared with last week.

FiveThirtyEight's latest forecast gives the Democrats a 17.4 percent (down from 18.7 percent a week ago) chance of winning control, and the Republicans an 82.6 percent (up from 81.3 percent) chance of retaining a majority.

Thirty-six state governor's mansions are being contested in 2018, 26 of which are currently held by Republicans, nine by Democrats and one by an independent.

The Republicans currently hold 33 governorships, so 2018 is an opportunity for the Democrats, who are defending three toss-up governorships to the Republicans' 13, according to The Cook Political Report, to hit back.

FiveThirtyEight forecasted an average number of 23.9 states to be governed by Democrats and 26.1 by Republicans.

In the 2014 midterms, only 35.9 percent of eligible adults voted, but the Trump presidency has motivated both sides and in 2018 turnout could hit a 50-year high.

More than 12 million Americans have already voted in the 2018 election, according to public data gathered by the United States Election Project, which is run by the University of Florida political scientist Michael McDonald. Echoing polls show high levels of enthusiasm among members of both parties.

In the latest national survey from the PBS NewsHour, NPR and Marist, conducted during Oct. 21-23, 76 percent of the registered voters surveyed said this year's election was very important. The vast majority of Democrats (83 percent) and Republicans (80 percent) indicated they were motivated to get to the ballot box, and two-thirds of voters who identify as politically independent also said they were energized this election.