By MAY ZHOU in Houston | China Daily 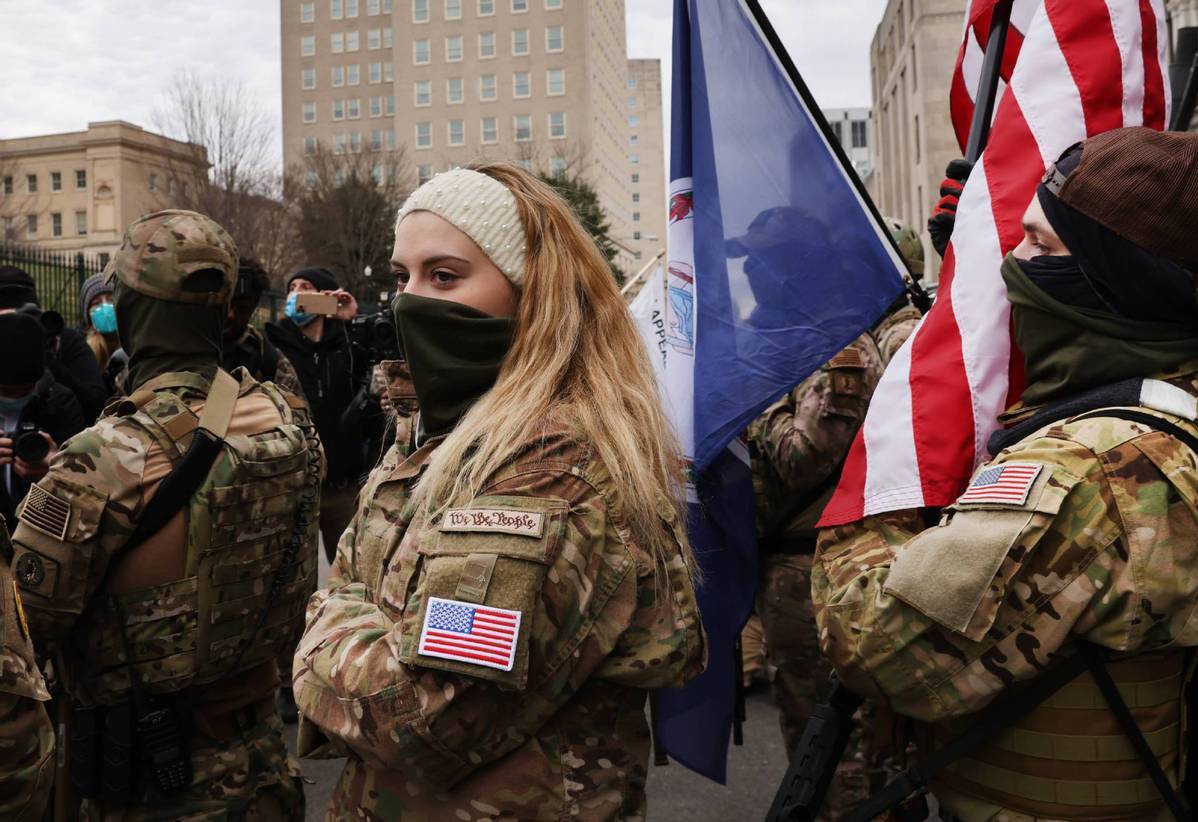 Members of a militia join other gun rights advocates in front of the State House as pro-gun supporters gather in Richmond, Virginia, on Jan 18, 2021. (Photo: Agencies)

A group of people on foot, some carrying long guns, and a caravan of more than 10 vehicles showed up in downtown Richmond, Virginia, on Monday to rally for the Second Amendment.

It is Dubbed "Lobby Day" because that is when people can lobby their state lawmakers for the amendment, which guarantees the right to bear arms.

The demonstration, hosted by the Virginia Citizens Defense League, was unable to obtain a permit to hold its yearly rally downtown, so it held the caravan instead.

The event was a far cry from last year when 22,000 people showed up, as the state capitol was ringed by security.

"The message is, you have rights, and we need to protect it. The most important right is the right to protect ourselves. We will not be silenced to go run and hide. If there is risk involved, liberty and freedom are worth it," Philip Van Cleave, league president, told the local CBS News affiliate.

As the FBI last week issued a warning of "armed protests" in all 50 state capitals during the presidential transition this week, at least 21 states have mobilized their National Guard to help protect their capitols.

Some states, like Michigan, canceled legislative sessions and closed their capitols through Wednesday, the day Joe Biden will be sworn in as the 46th president of the United States.

Texas DPS Director Colonel Steve McCraw said in a statement that DPS "is aware of armed protests planned at the Texas State Capitol and violent extremists who may seek to exploit constitutionally protected events".

"As a result, DPS has deployed additional personnel and resources to the Capitol and are working closely with the Federal Bureau of Investigation and the Austin Police Department to monitor events and to enforce the rule of law."

In Austin, a small group of gun-toting protesters advocating mostly for gun rights gathered outside the Capitol on Sunday.

"We're here to have a peaceful rally and to not allow legislators to take gun rights away. This is not about the election at all," Jeinay LeBlanc of Bay City told the Austin American-Statesman.

The FBI warned that protests would start over the weekend. While some did happen at state capitols, they were all peaceful and of small numbers — none exceeded 100, law enforcement officials said. Many other capitals remained quiet without any protesters showing up.

In Utah, authorities expected 500 to 1,500 people to attend a rally Sunday, but fewer than 20 showed up, according to The Salt Lake Tribune.

Some of the Utah protesters belong to Boogaloo Bois, an ultra-right-wing group with a mix of white supremacists who want to start a race war, and libertarians who believe in defending the rights of individuals against the government and have been known to incite violence against police.

Boogaloo Bois members also made appearances in the capitals of Arizona, Kentucky and Ohio in small numbers over the weekend.

In Sacramento, California, police backed by 1,000 National Guard troops have been deployed at the state Capitol until Wednesday's presidential inauguration.

Surrounded with a 6-foot chain-link fence, the building also has armed officers to confront violent protesters. But none ever arrived.

"It sounds reassuring, but it is indeed a shame. Since when did the presidential inauguration need such as huge police presence for security concerns?" said California resident Jian Yan.

She blamed Trump for fueling the Capitol riot on Jan 6. "Shame on Donald Trump," she said. "History books will show him as the worst president, and that's (how) he will be remembered."

Tom Lester, a Houston engineer, said the heightened security around the nation is a good move.

"Such a show of force sends out a strong signal to and will curb those extremists who think of taking violent action against the government. It's a good deterrence strategy to prevent an incident like the January 6th Capitol riot from happening again. The relatively quiet weekend is good proof," Lester said.