Paris (People's Daily) – A bronze statue to commemorate the Chinese Labor Corps in World War I was inaugurated in the square of the Paris Lyon train station (Paris Gare de Lyon) on Thursday, the day before International Day of Peace. 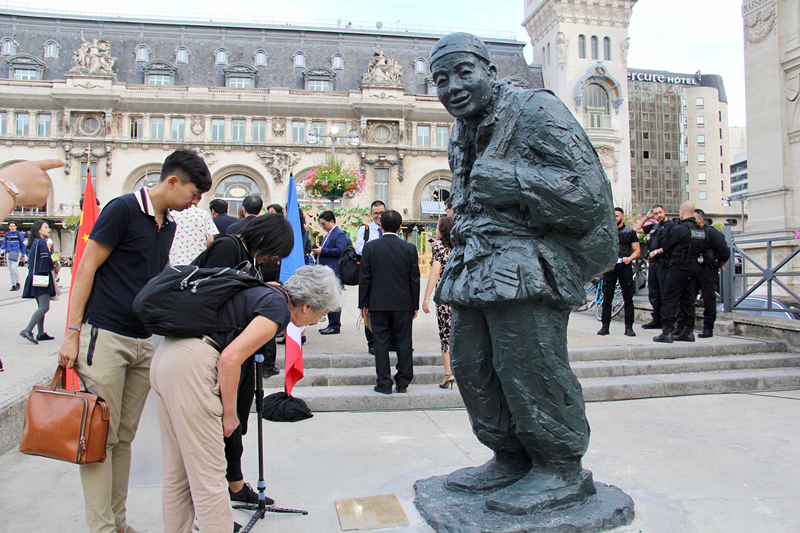 The statue of a Chinese laborer unveiled on the square of the Paris Lyon train station in Paris. (Photos: Gong Ming/ People's Daily app)

Measuring 2.63 meters high and weighing more than 600 kilograms, the statue was created by Chinese sculptor Li Xiaochao. It represents a Chinese farmer employed as soldier-worker just arriving at the Lyon train station after several months traveling on sea and by train.

Starting in August 1916, 140,000 Chinese workers from Shandong, Hebei, Zhejiang and other provinces in China traveled across the ocean, landed in Marseille and transferred to Paris by train. It is from this railway station that they set off for the battlefields to support the French and English Allied Army against the Germans. Some 20,000 of them died during the war. About 3,000 of them stayed in France and many settled down near the Lyon railway station, forming the first Chinese community in Paris. That’s why the Lyon railway station was chosen as the destination of this statue, symbolizing peace and friendship between China and France.

This year marks the centennial of the armistice of World War I. Early this year, French President Emmanuel Macron expressed on many occasions his appreciation for Chinese war labors which he called “brothers of the French people.” A ceremony was held in May in west France to honor the sacrifice of the Chinese laborers.

The Friends of Wu Jianmin of France, an association in honor of the former Chinese ambassador to France, brought up with the idea of establishing a commemorative statue. The project was completed thanks to support from Shandong Province, SNCF (the French National Railway Corporation) and the mayor of the 12th arrondissement of Paris.

The historical statue is based on real images of Shandong peasants. The statue is tall and strong, wearing a typical Chinese hat from the 1910s, dressed in a simple cotton coat, and carrying a big bag on his back. The naive smile on his face is so touching that people smile who walk by. 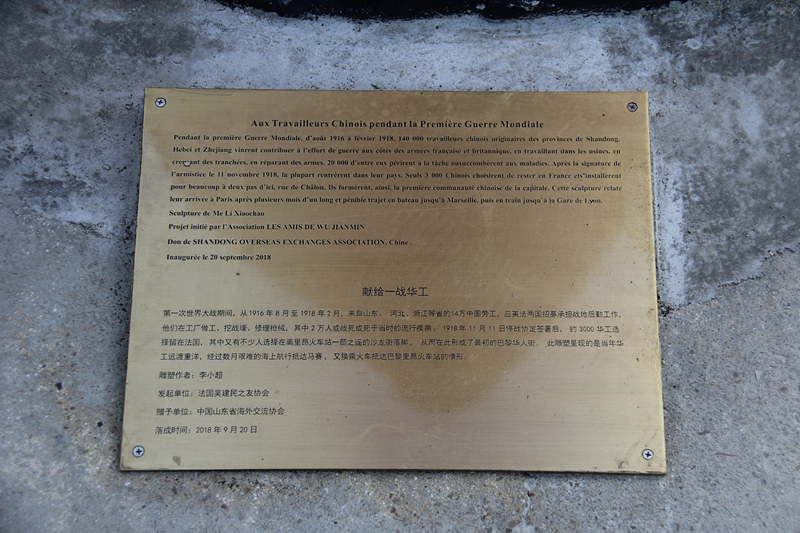 This plaque on the statue explains the story behind the statue in French and Chinese.

“Despite the difficult and long journey, despite the battlefields ahead, the Chinese worker still smiles,” explained Xu Bo, president of the Friends of Wu Jianmin Association. “We want to convey the message that there is still hope while suffering and that Chinese people are generous, optimistic and peace-loving.”

Paris Gare de Lyon is one of the largest train stations in France and Europe, with an annual flow of more than 170 million people. The location of the statue stands out, and has become a major symbol on the square.

“I have never seen such a statue in France. When I discovered the story behind that, I found it so beautiful and fantastic,” Françoise, a Parisian living nearby who witnessed the inauguration, said with emotion. “I think it’s a great choice to put the statue here because it brings hope for the future.” Françoise believed people passing by would definitely come close to the statue to observe and learn about the unknown history connecting the Chinese and French.

“Chinese workers in World War I made great contributions to the victory of the Allies and became a great part of French society,” Buon Tan, deputy of French National Assembly and chairman of the France-China Friendship Group of the Assembly, said at the inauguration ceremony. “The history is rarely known. The establishment of the statue can evoke people’s respect and memorialize this history,” Buon Tan added.

“This statue also expresses our desire for peace,” said Zhai Jun, Chinese ambassador to France. He delivered a speech saying that in our time people are becoming accustomed to peace, but bullying and violence always exist. The ambassador said he hopes that the peaceful message conveyed by the statue can be transmitted to every corner of the world. “Only by respect, understanding and closeness can we accept and appreciate each other. Only by eliminating wars can we create a better future.”

Ye Xingqiu, a poet and historian who studied the Chinese in France, said, “It warns us the war has brought enormous suffering. Remembering this suffering will inspire people to cherish peace.”

Olivier Cazenave, vice-president of the Prospective and Innovation Foundation created by former French Prime Minister Jean-Pierre Raffarin, said, “The importance of Chinese workers in World War I has been underestimated for a long time. Clarifying this history is crucial to France-China relations.” Cazenave said while paying tribute to Chinese workers, “It’s important to notice that China has always supported peaceful dialogue and safeguarded world stability.”