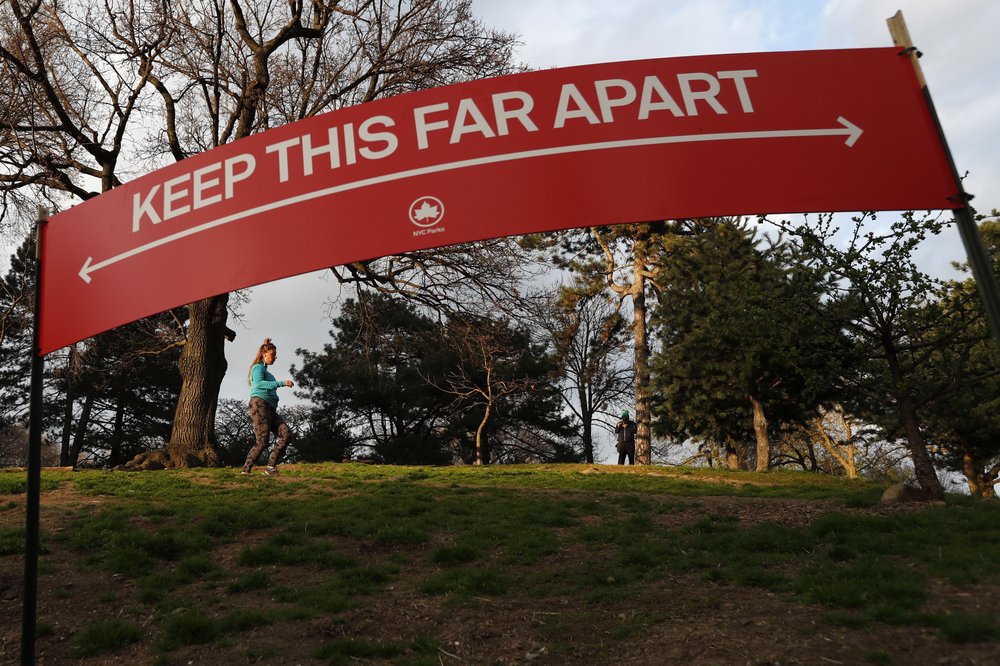 A woman jogs in Brooklyn's Fort Greeene park, Sunday, April 5, 2020, beneath a sign demonstrating the distance people should keep from each other during the coronavirus outbreak in New York. (Photo: AP)

New York Gov. Andrew Cuomo extended stay-at-home restrictions through the end of the month and increased fines on violators to up to $1,000, citing fresh evidence Monday that the outbreak-fighting rules could be helping the state avoid a worst-case catastrophe.

The situation remains grim, with close to 17,000 people hospitalized, but there are signs the surge might finally be slowing.

While the death toll grows, the daily increases are leveling off. The daily number of new hospitalizations has dropped. Recent data suggests the state could be at or near the peak, meaning fewer hospital beds would be needed in the coming weeks than the most dire projections had indicated, according to state officials.

New Jersey Gov. Phil Murphy sounded a similar note Monday, saying the curve “is beginning, and I use that word cautiously, is beginning to flatten.”

Cuomo called the data hopeful but inconclusive, and warned it was no time the relax rules designed to cut down on transmission. He announced schools and nonessential businesses will remain closed until April 29 and that the maximum fine for violations of state social distancing protocol will soon be $1,000, up from $500.

“This virus has kicked our rear end. And we underestimate this virus at our own peril. We’ve learned that lesson,” Cuomo told a news briefing at the state Capitol. “Now is not the time to slack off on what we’re doing.”

Dr. Christopher Murray of the University of Washington, who developed a model that predicts New York will need 25,000 hospital beds for virus patients at the peak of its epidemic, agreed that people should continue to isolate themselves.

“The potential for rebound is enormous if we let up on social distancing,” he said.

A Siena College poll released Monday found that most New York state residents say they are either quarantining themselves or social-distancing. But Cuomo complained about a “laxness” in social distancing as the weeks of isolation wear on and the weather gets warmer.

Cuomo stressed that even if New York has reached the peak, numbers could persist at these levels, which would continue to stress struggling hospitals.

″This is a hospital system where we have the foot to the floor and the engine is at red line and you can’t go any faster and, by the way, you can’t stay at red line for any period of time or the system will blow,” Cuomo said.