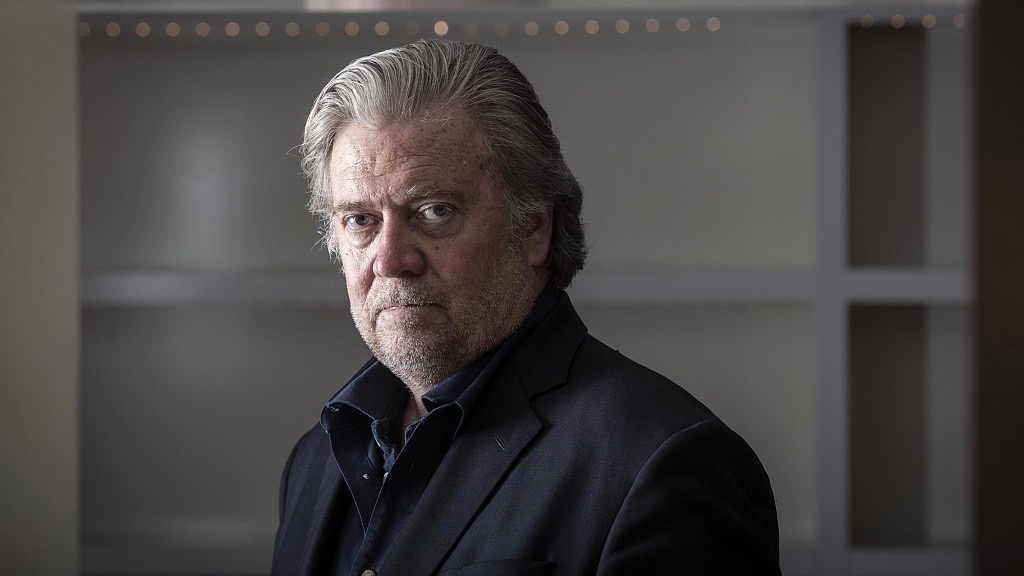 Steve Bannon has made a career carving out a niche in the American media landscape. As the former executive chairman of Breitbart News Network, he gave the country's white nationalists a powerful voice. His influence took on mainstream visibility as Trump's chief strategist during the president's early days in office, before trying to bring his brand of fiery politicking to the diverse pastures of Europe.

Although no longer in Trump's inner political circle, Bannon continues to vocalize his support for the president's policies, especially on the US trade war against China. How did Bannon, who had waged war with mainstream media by calling it the "opposition party," change the country's political landscape? And how is Bannon a force and product of a resurgent wave of nationalism sweeping the West?

Considered one of the advisers behind Trump's more controversial actions in office, Bannon set out to take on the establishment. Bringing his anti-immigrant sentiment to the White House, he was key to the president passing the ban on seven Muslim-majority countries.

He claims he is pushing the agenda of "economic nationalism," not "white nationalism," even though the policies he's inspired have often been associated with racism. During the presidential election, Bannon, as the Trump campaign's CEO, cultivated the fear of open borders and fanned the distrust of political opponent Hillary Clinton.

Bannon's combative worldview seems to thrive on chaos. Even the bombastic conservative Glenn Beck, formerly a pundit on Fox News, said that he is a "terrifying man." Despite such vivid descriptions, Bannon came from humble beginnings, growing up with four siblings in an Irish-Catholic family that he had said was a blue-collar household of Democrats. Although his path to becoming a media mogul was far from linear, Bannon's ambition was apparent early on.

After graduating from Virginia Tech in 1976, he joined the navy, serving as an auxiliary engineer and a navigator. He eventually gravitated toward the glitter of Wall Street, attending Harvard Business School to get a foot in the door of finance. Bannon then got his chance to work at Goldman Sachs as a banker, but left and found an investment bank that specialized in the entertainment industry.

Bannon's growing wealth allowed him to plunge into the media industry. He befriended Andrew Breitbart, a conservative commentator who started the website Breitbart News Network. After Breitbart's sudden death in 2012, Bannon became the online publication's executive chairman, dragging its editorial agenda further right in what has come to define his media influence.

This unabashed agenda to promote a brand of radical conservatism called the alternative right, or alt-right, impressed Donald Trump. The New York billionaire, who shares Bannon's disdain for political correctness, appointed the latter as CEO of his presidential campaign only months before the 2016 elections. Bannon took the campaign up a notch by playing up Trump's appeal to populists, as well as riling up their fear of immigration and distrust of rival Hillary Clinton.

Bannon left the Trump administration in August 2017, only seven months after the new president took office. The media painted his time there as one of discord with key White House personnel, including then chief of staff Reince Priebus and press secretary Sean Spicer. However, he managed to exert considerable influence over controversial policies at the time, encouraging Trump to pass the ban on visitors from seven Muslim-majority countries and to withdraw the US from the Paris climate accord.

Bannon has continued to fight for what he calls "economic nationalism." He contends that it is intended to oppose "globalism," which he believes has put the interests of the country's elite over those of the working class. However, critics have been quick to point to the ideology's similarity to white nationalism, as it has furthered protectionism and cultivated hostility toward Muslim immigration – in essence, the core principles of Trump's "America First."

Even after leaving Trump's inner circle, Bannon has vocalized his support for Trump's policies, most notably the president's stance on trade with China. He penned an op-ed in the Washington Post, calling China "the greatest existential threat ever faced by the United States."

He goes on to cite the second largest economic power's alleged violations regarding intellectual property and high tariffs. Bannon concludes that the current trade conflict is "a fundamental clash between two radically different economic models."

Ever the staunch defender of his America first agenda, he took his proselytizing zeal to Europe, helping the far-right to gain greater political representation. He has set up battle stations on the continent, mingling with right-wing populist parties such as Matteo Salvini's League in Italy and Marine Le Pen's National Front in France.

Bannon has offered assistance in hopes of helping them win seats in the upcoming elections for the European Parliament, but not everyone has been receptive. An official of Austria's Freedom Party said that it wants to expand, but "not under the leadership of someone from another continent."

While Bannon continues with his mission to upend an order built on globalization, he has managed to tap into the nerve of populism and the fear of fluid boundaries. Even though the political and social mainstream continues to perceive his ideology and his associations to be a growing yet still fringe group, he has proven the establishment wrong before.