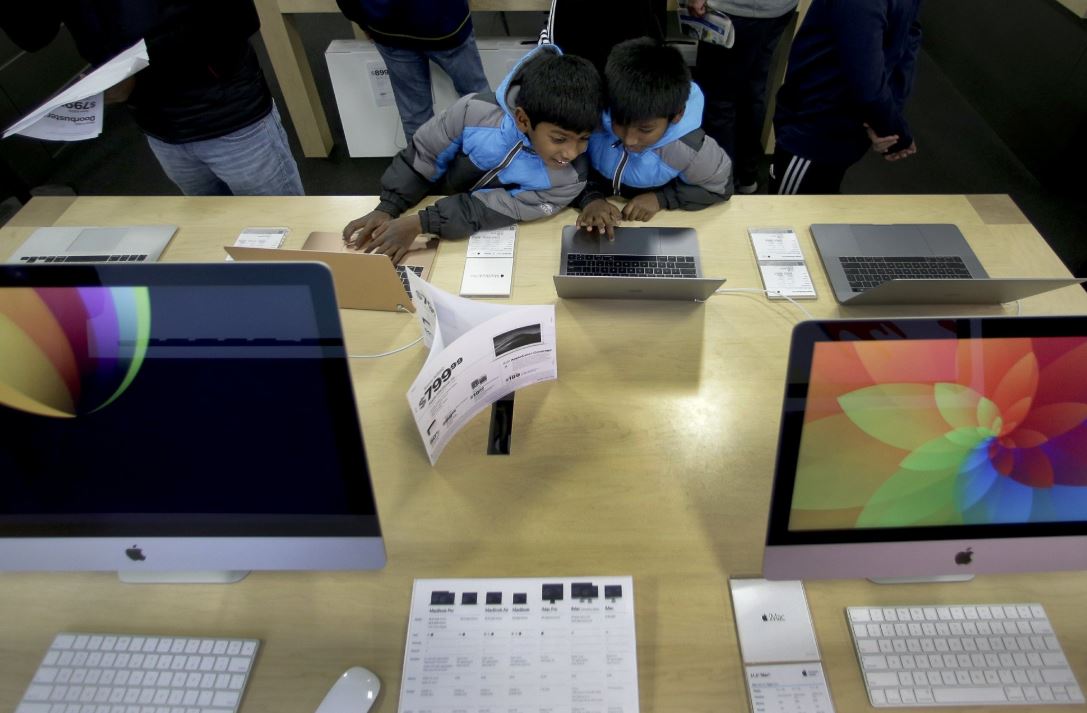 Retailers are offering much of their Black Friday deals online, but shoppers still showed up at malls and stores around the country looking for discounts — and also to take in the scene.

Kati Anderson said she stopped at Cumberland Mall in Atlanta Friday morning for discounted clothes for her husband as well as “the people watching.” Her friend, Katie Nasworthy, was also hoping to score clothing deals, but said she went to the mall instead of shopping online because she likes to see the Christmas decorations.

Black Friday is expected to be the busiest shopping day of the year, according to ShopperTrak, a technology company. And analysts say Black Friday sales should be even bigger than a year ago. They are expected to hit $23 billion on Friday, up from $21 billion during the same year-ago period, according to MasterCard SpendingPulse, which tracks all forms of payment, including cash.

“We are off to an optimistic start but there is a long way to go,” said Marshal Cohen, chief industry adviser of the NPD Group, a market research firm. He noted that despite lines to get into stores Thursday night, there wasn’t a “mad dash” to buy.

“The deals are available everywhere. They’ve been available for weeks,” Cohen said.

Indeed, Black Friday has morphed from a single day when people got up early to score door busters into a whole month of deals. Many major stores, including Walmart, Best Buy and Macy’s, start their blockbuster deals on Thanksgiving evening, which has consequently thinned out the crowds.

Macy’s was pushing such door buster deals as 70 percent discounts on cookware and 40 percent off of boots. As of early morning Friday, the Macy’s flagship store in New York, which opened all night, had a steady stream of shoppers, mostly tourists.

“We got here at 4:30 a.m. We couldn’t go to sleep so we went shopping,” said Shane Wilson, who was visiting from London. She was buying shoes and boots at 40 percent off. Her next stop was Bloomingdale’s.

Nicole Battini, from Bologna, Italy, showed up with a friend at Macy’s at 5 a.m. after a night of clubbing. Battini was looking for shoes, a handbag and a coat. Then she said she was going to sleep.

“Tomorrow, we go back to clubbing,” she said.

Besides deals, retailers have also been introducing new technology to make it easier to shop inside their stores. Walmart has a new digital map on its mobile app so shoppers can find an item’s exact location in the store. The Kohl’s app lets customers take photos of products anywhere and find similar items at the department store. And customers, frustrated with long checkout lines, can check out at Walmart and other stores with a salesperson in store aisles.

Shoppers are also facing new free shipping options. Target leapt in front of Walmart and Amazon to offer two-day free shipping for the holidays without any minimum purchases. Online leader Amazon followed, dropping its $25 minimum. Walmart is still sticking with its $35 threshold.

With the jobless rate at a five-decade low of 3.7 percent and consumer confidence at an 18-year high, analysts project healthy sales increases for November and December. The National Retail Federation, the nation’s largest retail trade group, is expecting holiday retail sales in November and December — excluding automobiles, gasoline and restaurants — to increase as much as 4.8 percent over 2017 for a total of $720.89 billion. The sales growth marks a slowdown from last year’s 5.3 percent, which was the largest gain since 2010. But the figure is still healthy.