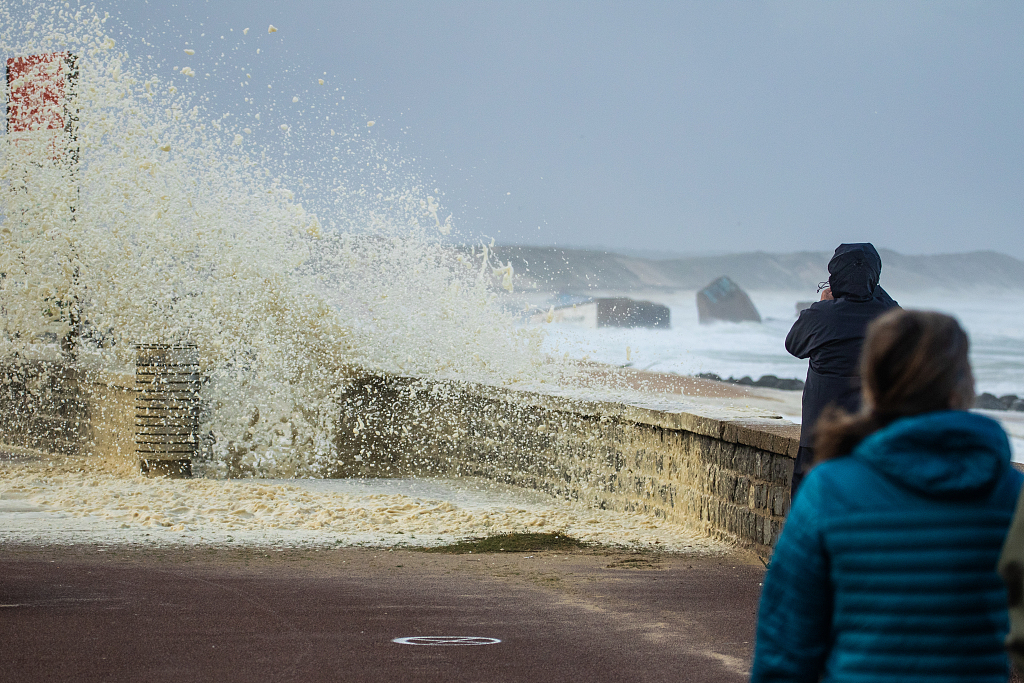 A person in Capbreton walking near the ocean on November 3, 2019 during the Amelie storm. (Photo: VCG)

No deaths have been confirmed, but a woman in her seventies was reported missing in southern Nice after a landslide.

Emergency workers were searching the landslip on land overlooking her home to try to find the missing woman, an AFP journalist witnessed.

Early Sunday, 14 of the country's 100-odd departments had been placed on high alert as Amelie brought heavy rains to the Atlantic coast, with winds exceeding 160 kilometres (100 miles) per hour in places.

Weather service Meteo France said winds as strong as 163 km/h (100 mph) were recorded in the coastal departments of Gironde and Landes, and 121 km/h in Bordeaux.

Electricity supplier Enedis said it was working round the clock to restore electricity to some 140,000 customers left without power for hours.

In the Landes department 47 people had to be evacuated from a camp site, and a casino roof collapsed.

Several trains in the area were cancelled or delayed, after around 50 trees came down on the lines, said the rail operator SNCF.

The southeast was not spared, with heavy rainfall forcing the evacuation of a travellers' camp.

Around 30 motorists also had to be rescued as their cars got stuck in the deluge and several shops and homes had their basements flooded.

The extreme weather forced the temporary closure of both the A7 and A21 motorways in the south of the country.

Two flights were cancelled Sunday morning from Ajaccio, on Corsica, while other flights were rerouted to the island's other airport at Bastia.