WORLD Storm punishes swath of US with snow, ice and freezing rain

Storm punishes swath of US with snow, ice and freezing rain

A winter storm that contributed to at least five deaths in the Midwest pummeled the mid-Atlantic region for a second day Sunday, bringing with it an icy mix that knocked out power, cancelled flights and contributed to hundreds of car accidents.

Virginia State Police said the driver of a military surplus vehicle was killed late Saturday after he lost control on Interstate 81 because of slick road conditions. 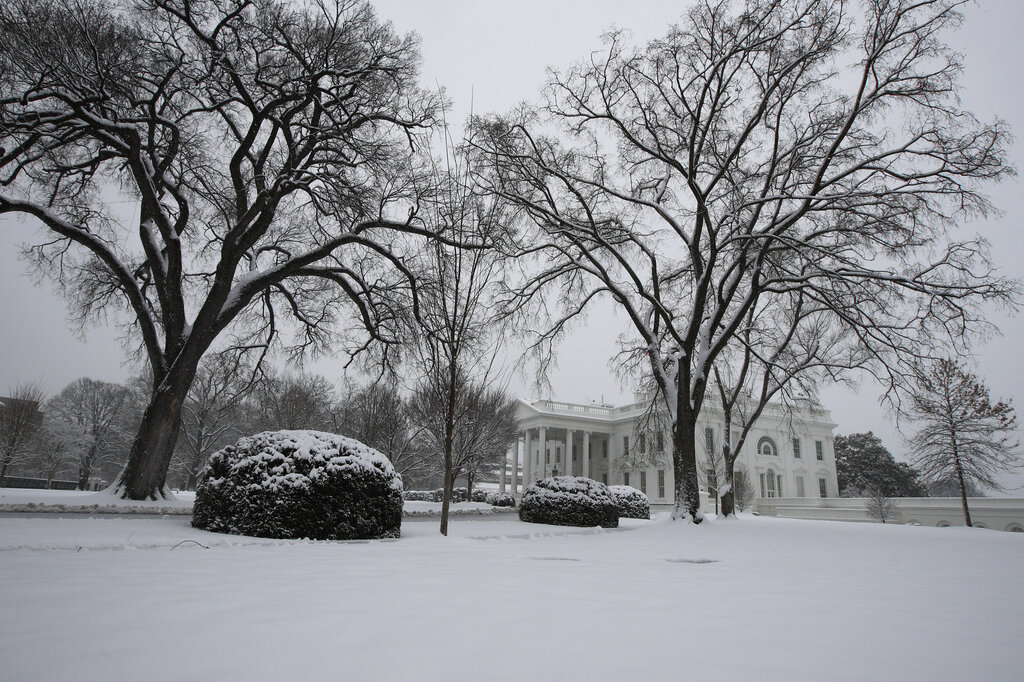 Snow covers the North Lawn of the White House in Washington, Sunday, Jan. 13, 2019. A winter storm brought snow to the Mid-Atlantic region, where forecasters upped their predicted weekend accumulations and transportation and emergency officials urged residents to stay off the roads.(Photo: AP)

Police said Ronald W. Harris, 73, of Gainesville, Georgia, died after his vehicle was struck by two tractor-trailers. The two tractor-trailer drivers were taken to a hospital for injuries that were not life-threatening. The state medical examiner determined Sunday that Harris' death was storm-related, police said.

The storm knocked out power to nearly 200,000 people in Virginia and North Carolina at its height Sunday, according to PowerOutage.us.

People sled on Capitol Hill as a winter storm arrives in the region, Sunday, Jan. 13, 2019, in Washington.(Photo: AP)

In North Carolina, Gov. Roy Cooper declared a state of emergency Sunday to help utility crews restore electricity more quickly after power lines fell because of freezing rain, ice and toppled trees. The state's western mountains and foothills were hardest-hit along with the western Piedmont region and nearly 1,000 state transportation workers were called out to clear ice and snow.

The National Weather Service reported nearly a half-inch of ice in some sections of western North Carolina, leading to fallen trees and power lines but other areas of the state got mostly a cold rain or freezing precipitation.

Meanwhile, the storm caused headaches for travelers into and out of airports in the region, including more than 250 flight cancellations Sunday at the three main airports serving the nation's capital. Washington's Dulles International Airport tweeted that the Federal Aviation Administration had implemented a ground stop there on Sunday evening, impacting both inbound and outbound flights.

For air travelers, the Dullest airport authority subsequently tweeted tips for flying on a snow day, including frequently checking for airline flight changes and packing "patience, a good dose of snow humor & a packet of hot chocolate." 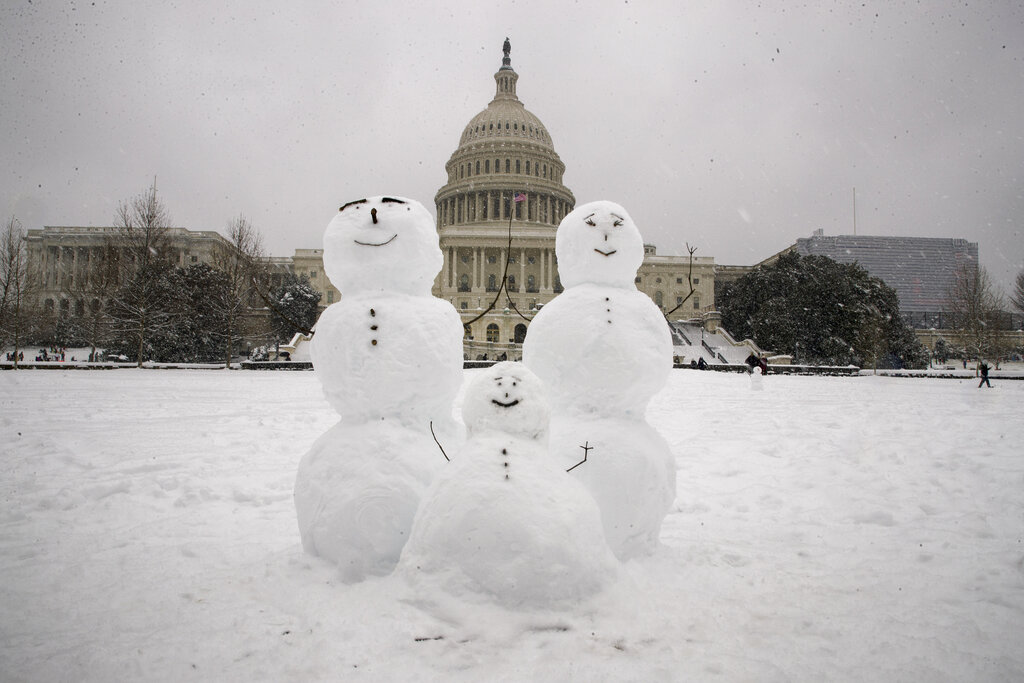 A snow family is seen on Capitol Hill as a winter storm arrives in the region, Sunday, Jan. 13, 2019, in Washington. (Photo: AP)

By late Sunday afternoon, the Washington, D.C. metro area, northern Virginia and parts of Maryland had total snowfall accumulations ranging from five to eight inches (12-20 centimeters). Central Virginia, including Richmond, had much smaller accumulations — as little as one inch (2.5 centimeters)— but the snow was followed by hours of sleet and freezing rain.

Marc Chenard, a meteorologist with the Weather Prediction Center in College Park, Maryland, said parts of the region could expect snow to continue falling into Sunday evening.

"At this point, it is just going to head out to sea once it exits here this evening," Chenard said.

The storm also was affected parts of Maryland. In Baltimore, a man was fatally shot as he shoveled snow early Sunday morning. Police said a 43-year-old man was outside shoveling at 4:40 a.m. when an unidentified suspect shot him in the head and shoulder. The victim died at a hospital.

Meanwhile, Illinois was trying to dig out from under heavy snowfall in some areas. 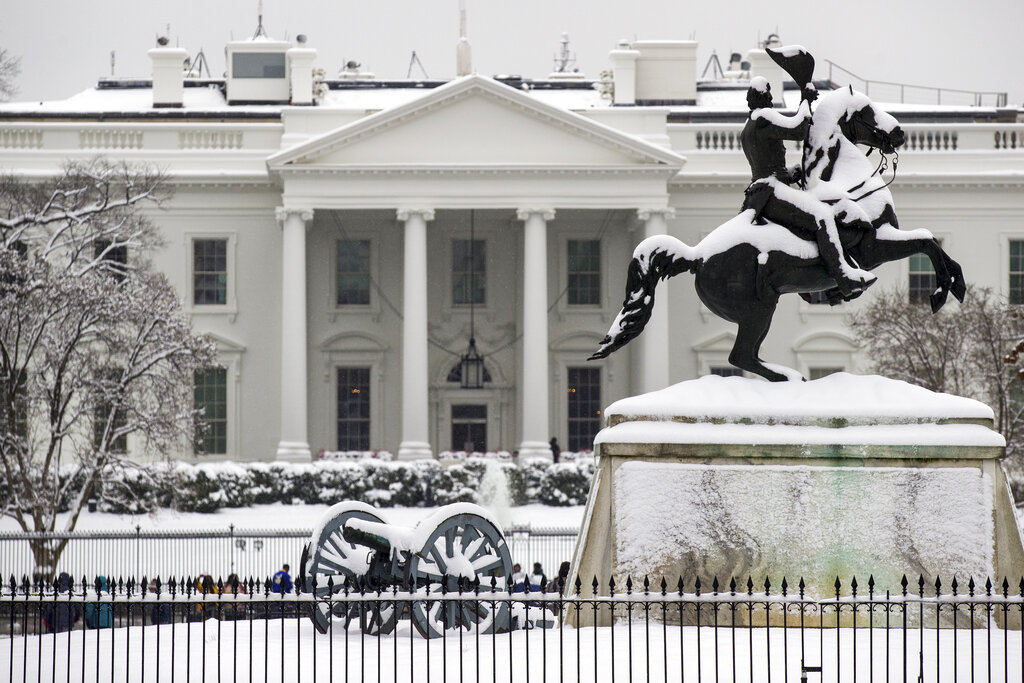 Snow blankets a statue of Andrew Jackson in Lafayette Square with the White House behind, as a winter storm arrives in the region, Sunday, Jan. 13, 2019, in Washington. (Photo: AP)

Among those killed in the Midwest during the storm was an Illinois state trooper struck by a car when he responded to a three-vehicle crash Saturday in suburban Chicago.

State Police Director Leo Schmitz told reporters that 34-year-old Christopher Lambert was headed home when he pulled over and got out of his squad car to respond to the accident. Schmitz said Lambert positioned his squad car to protect the other three cars and "took on the danger himself."

For Kansas City Chiefs offensive guard Jeff Allen, there was a bright spot hen a Good Samaritan helped pull his vehicle out of the snow after he got stuck en route to Arrowhead Stadium for the divisional playoff game Saturday.

Allen said he made it on time for the Chiefs' victory over the Indianapolis Colts because of the assistance. The man who helped Allen didn't know he was a Chiefs player at the time.

Allen turned to Twitter to track down the Good Samaritan. When they connected Sunday morning, Allen thanked him and promised him tickets to next week's AFC Championship game.