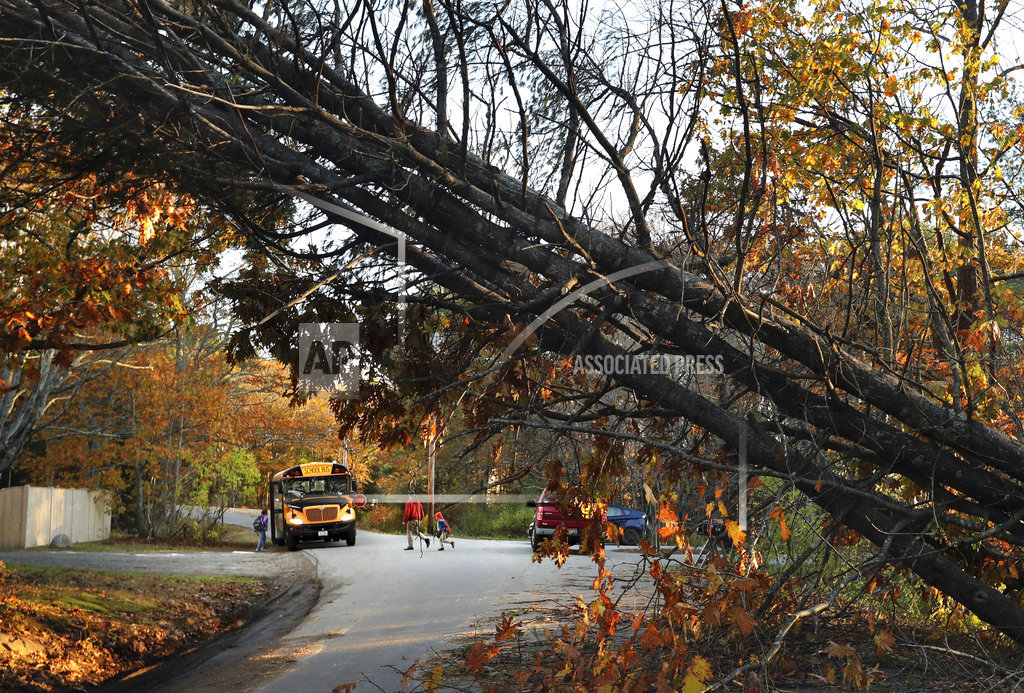 The Latest on a powerful storm that cut power to more than 1.5 million customers in the Northeast (all times local):

The wind storm that knocked out power to hundreds of thousands of people in New England is causing headaches for Amtrak's Downeaster between Boston and Brunswick, Maine.

Downeaster service was shut down Monday and Tuesday. Then a train-bus hybrid service was temporarily thwarted Wednesday by a broken-down freight train.

Executive Director Patricia Quinn says power outages are affecting crossings in Maine. She said that when a crossing is inoperable, trains are limited to 20 mph, and an engineer on foot must escort the train across road crossings.

Maine isn't giving a break to schools that have closed because of this week's powerful Northeast wind and rain storm.

The Maine Department of Education says schools must treat cancellations the same as any other weather-related closing, meaning districts must still offer students the 175 instructional days for the school year.

Some administrators are worried that lost days this week and more lost days due to winter storms could extend the school year in June.

The Department of Education said Wednesday it'll evaluate the written requests for waivers in the spring, when districts have a better sense of missed days.

Rhode Island's main electric utility says its top priority is to restore power to the nearly 35,000 homes and businesses in the state that still lack electricity after some state officials criticized its response as too slow.

National Grid Rhode Island spokesman Ted Kresse said Wednesday that the utility has restored power to more than 120,000 residential and business customers since the storm, which hit Sunday and Monday and knocked out power to 154,000 customers in the state.

Kresse has said the utility hopes to restore power to most customers by Wednesday night, but rural communities and individual outages might take until Thursday.

Some Rhode Island officials say it's taking too long for the state's main electric utility to restore power after a Northeast storm knocked out electricity for 154,000 homes and businesses.

Utility National Grid says nearly 35,000 customers were still without power Wednesday afternoon. Some schools were closed for a third day because of the outages.

Democratic Lt. Gov. Dan McKee says the communication from National Grid has been "insufficient and inconsistent." He says the utility seems to have been able to restore outages in Massachusetts faster than it did in Rhode Island.

National Grid spokesman Ted Kresse says the company hopes to restore power to most customers by Wednesday night. He says rural communities and individual outages might have to wait until Thursday.

In Vermont, dairy farmers who lost electricity in this week's wind storm are relying on generators to power the equipment that allows them to milk cows and to keep milk cool.

It's unknown how many farms lost power, and it could take until Saturday to have it fully restored. Vermont is the largest dairy-producing state in New England with about 800 dairy farms.

The Vermont Agency of Agriculture also says about a dozen farms have reported thousands of dollars of damage from the wind storm, mostly to greenhouses and hoop houses.

Nearly 1.5 million customers in the region lost power due to a powerful wind and rain storm that peaked in the early Monday morning hours.

Several school districts in New Hampshire are struggling to get up and running two days after a massive storm knocked out power and damaged roads in the Northeast.

Crews were trying to repair three electrical poles feeding the Kearsarge Regional High School in Sutton on Wednesday, and many residents in the district still were without power. Some roads leading to the school district remained closed because of downed power lines and other storm damage.

Nearly 1.5 million customers in the region lost power due to a powerful wind and rain storm that peaked in the early Monday morning hours.

Utilities companies in the Northeast say the number of homes and businesses without power fell by nearly half in a 24-hour period.

More than 440,000 customers still lacked power on Wednesday morning, down from more than 840,000 a day earlier.

In all, nearly 1.5 million customers in the region lost power due to a powerful wind and rain storm that peaked in the early Monday morning hours.

Maine remained the most impacted state, with more than 260,000 homes and businesses still in the dark on Wednesday morning. Some schools and public facilities remained closed on Wednesday.

Drought conditions across much of Maine may have contributed to the large numbers of trees that toppled during a storm that walloped the Northeast this week.

The storm cut power to more than a million people in the region at its peak. It left more Mainers in the dark than even the infamous 1998 ice storm, but the long-term effects will likely be much different.

Officials with the Maine Emergency Management Agency say because of dry conditions, the roots of many trees weren't healthy. They also say the ground conditions along with foliage that remained on the trees made them more susceptible to wind.