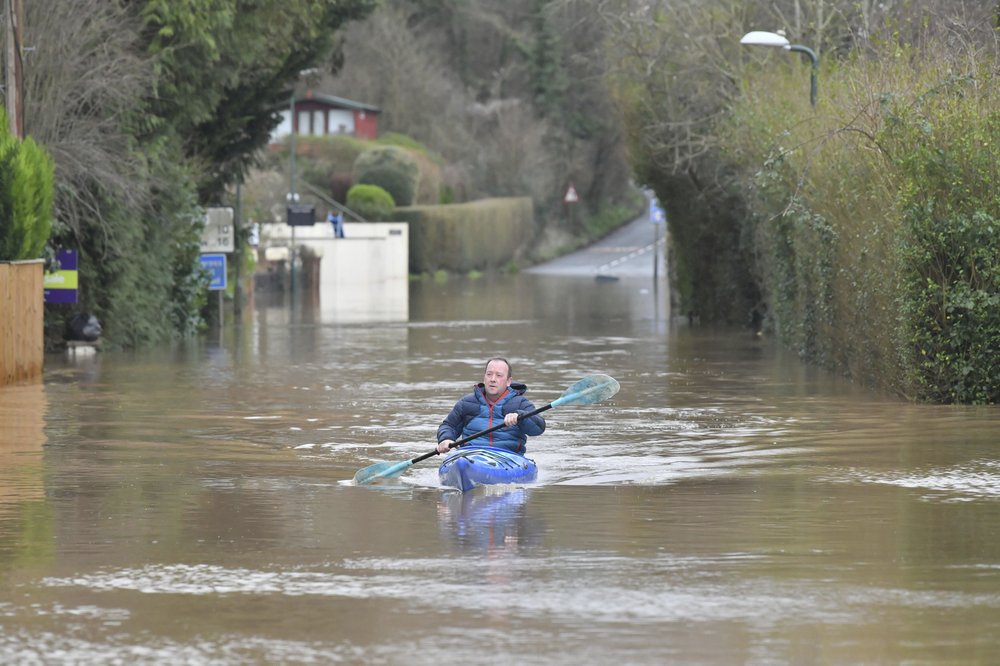 Residents in central England and Wales piled up sandbags, readied water pumps and hoped for the best Tuesday as rivers peaked after a weekend storm brought up to 6 inches (150 mm) of rain to an already waterlogged region.

In the Welsh town of Monmouth, the River Wye reached a record level of over 23 feet (7.15 meters). Residents of one flooded street used canoes to get to a nearby supermarket and mountain rescue teams saved one man from his flooded home by raft.

The Welsh water supplier asked residents to reduce their usage after a water treatment plant was flooded and lost power. Welsh Water said it had “limited storage of drinking water until we’re able to access and restart the treatment works.”

Storm Dennis — the second major storm of the winter —- blew through the UK on Saturday and Sunday, bringing wind gusts of up to 90 mph (145 kph) and heavy rain that flooded roads, railways, homes and businesses. The storm killed three people in Britain, including a 55-year-old woman who was swept away by floodwaters in the central English town of Tenbury.

The fierce weather also upended travel plans for thousands of British families trying to get away for the mid-winter school break. It turned rivers, including the Severn and the Wye, which normally meander through picturesque countryside, into raging torrents.

Dave Throup, a manager in the region for the Environment Agency, tweeted; “I’ve seen things today I would not have believed. … This is not normal flooding, we are in uncharted territory.”

British Prime Minister Boris Johnson has been criticized by opponents for failing to visit any flooded areas or to convene a meeting of the government’s crisis committee, COBRA.

Flood defenses successfully held back the water in many threatened areas, but Throup said residents should “remain vigilant,” with more rain forecast for Wednesday and Thursday.

“There may be some short-term drops in levels but they may well rise again,” he said. “We’re certainly not out of the woods yet, there is quite a long way to go with this flood.”

The storm also left a trail of flooding and power outages across northern Europe, including in southwestern Sweden.

The high seas churned up by the storm dragged an abandoned cargo ship, the MV Alta, and left it to crash upon the shore near Ballycotton in County Cork, southwest Ireland.