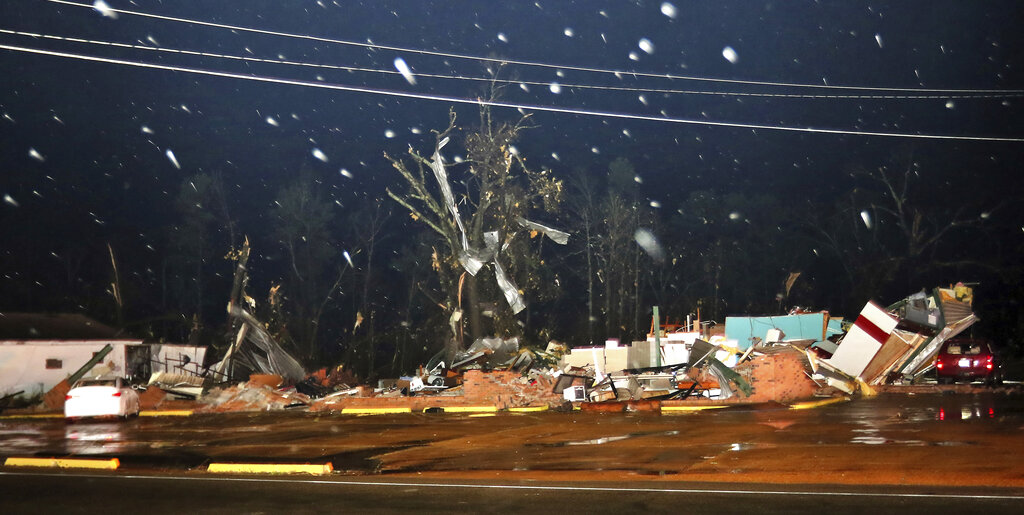 A tornado smashed into a commercial district in the small Mississippi city of Columbus on Saturday afternoon, shattering businesses as severe storms raked the South amid days of drenching rains and a rising flood threat.

The tornado struck about 5 p.m. in the east Mississippi city and was confirmed on radar, said meteorologist Anna Wolverton with the National Weather Service in Jackson. She said by phone with The Associated Press that a team would go to the city of about 23,000 people Sunday to gauge the tornado's intensity. 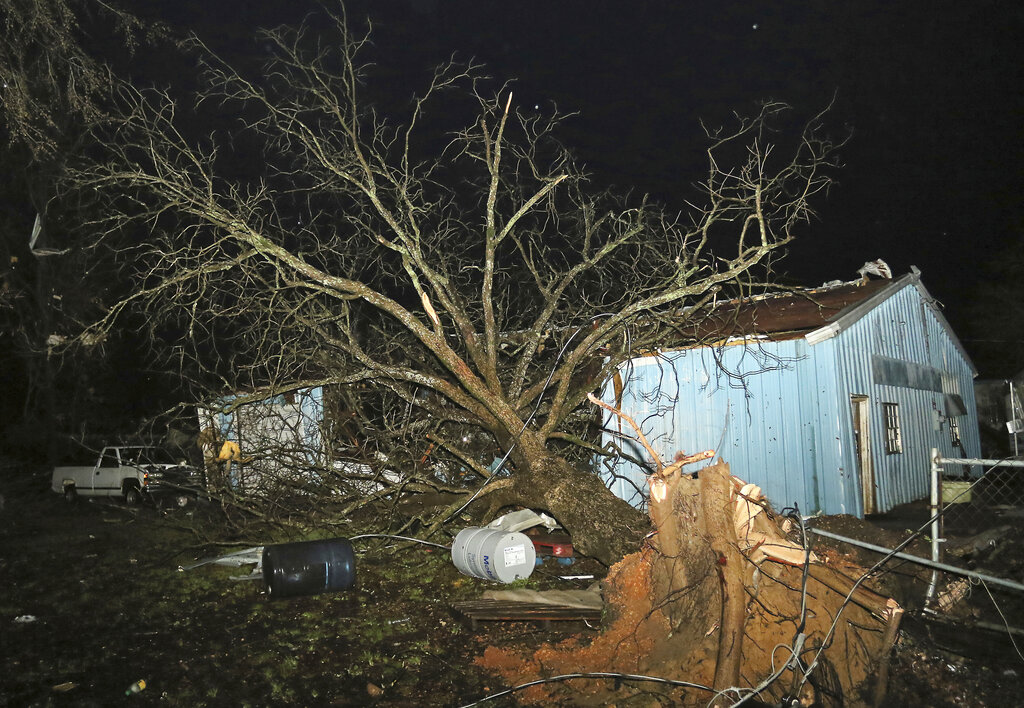 There were no immediate reports of any deaths or injuries.

Lee Lawrence, who said he has been selling used cars for decades in Columbus, told The AP that four buildings on his car lot had been destroyed. He said trees toppled across vehicles and car windows had been blown out. And he said he had no idea about how badly his collection of antique cars fared.

He said he was at home getting ready to take a bath when the storm struck. 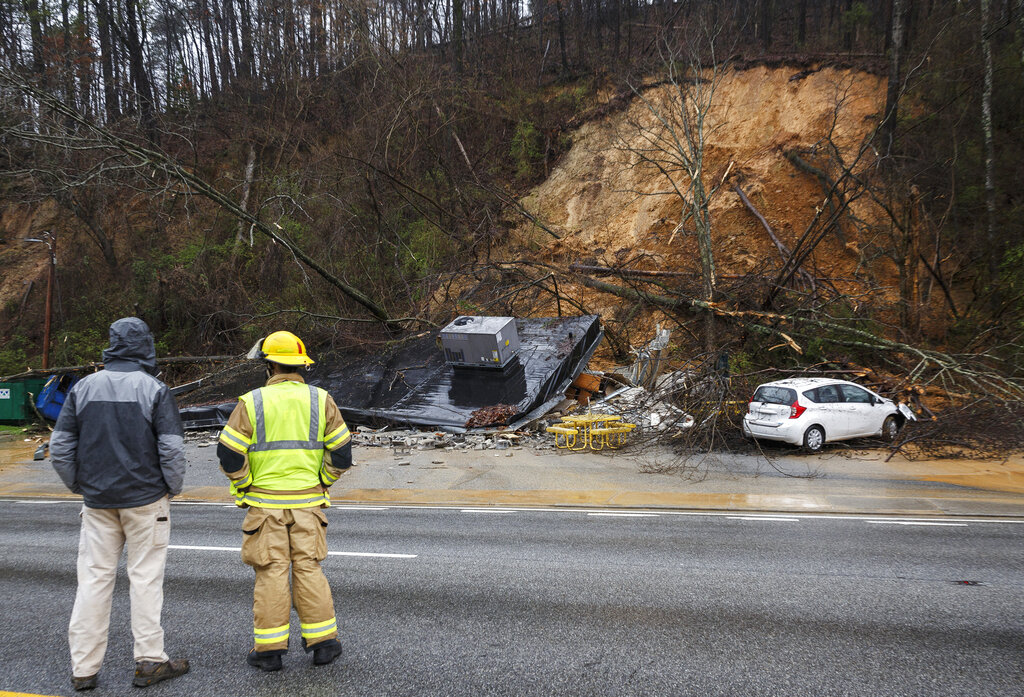 "The wind all of a sudden just got so strong and it was raining so much you could hardly see out the door, and I could hear a roaring. Evidently it came close," he said, speaking with AP in a phone interview. He said someone called him soon after about the damage to his business and he rushed over.

"It will be a start-over deal," Lawrence said. "I can't say it will come back better or stronger, but we'll come back."

A photographer working for The AP in Columbus said some antique cars on Lawrence's lot were parked among the damage and a nearby pet grooming business appeared now to be mostly twisted piles of metal. A printing shop had been speared by a pipe with great force and what seemed to be a vacant commercial building nearby appeared heavily damaged.

Firefighters and law enforcement officers had cordoned off the area, making it difficult to determine the extent of the damage after nightfall. Power also was blacked out in the area.

Elsewhere around the South, homes, highways, parks and bridges have been flooded or put out of commission amid the heavy rains and severe storms. News outlets report that water rescues have been performed in some Middle Tennessee counties. Flash flood warnings and watches remained in place throughout the South and one Mississippi community reported large hail. 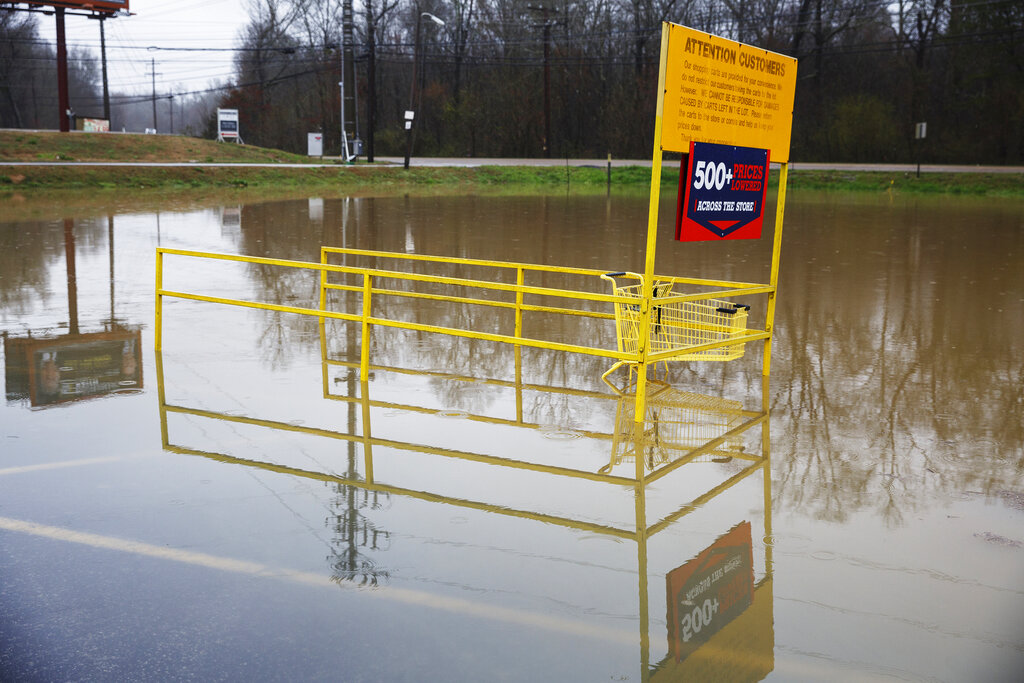 Interstate 40 near the Tennessee line with North Carolina was closed by a rockslide, one of the dozens of roads and highways shut down throughout the South region, transportation officials said.

Tennessee Department of Transportation spokesman Mark Nagi said on Twitter that a "full scale detour" was in place, with traffic being diverted to Interstate 81 and Interstate 26.

In Bruce, Mississippi, rivers broke flood stage and flash floods poured into homes and businesses. News outlets report that a local state of emergency was declared by officials in Grenada, Mississippi, after dozens of streets and homes flooded. A six-mile (nine-kilometer) stretch of the Natchez Trace Parkway was closed in Mississippi after water covered part of the road.

The National Weather Service had issued a flash flood warning for northwestern Lafayette County in Mississippi after emergency officials reported that a local dam was at risk of failing.

Meteorologist Kole Fehling says emergency officials reported the threat involved the Audubon Dam, which blocks a creek on the northside of Oxford and a subdivision. Emergency management officials were not immediately available for comment Saturday.

High water also threatened property in Tennessee, which, like many other areas of the South, has been soaked by several inches of rain over the past week. Officials said a mudslide destroyed a Subway restaurant in Signal Mountain, Tennessee. No injuries were reported.

Weather officials said the storm system threatened areas from eastern Arkansas across the South to Alabama. Alabama's governor declared an emergency in several counties as a measure to speed any recovery.

Kentucky announced Friday that it was closing the U.S. 51 bridge over the Ohio River to Cairo, Illinois, because of flooding on the southern approach. The bridge, which carries 4,700 vehicles a day, is likely to stay closed until Thursday, and possibly longer.

Near Jamestown, Kentucky, the Army Corps of Engineers said it was increasing releases from the Wolf Creek Dam on the Cumberland River. Areas located downstream of the dam, from Rowena to Burkesville, could be affected by flooding as a result, officials said.

The Ohio River at Cairo is predicted to crest Sunday at its third-highest level ever recorded, and stay that high into next week. The Tennessee River near Savannah, Tennessee, also is forecast to crest at near-record levels.