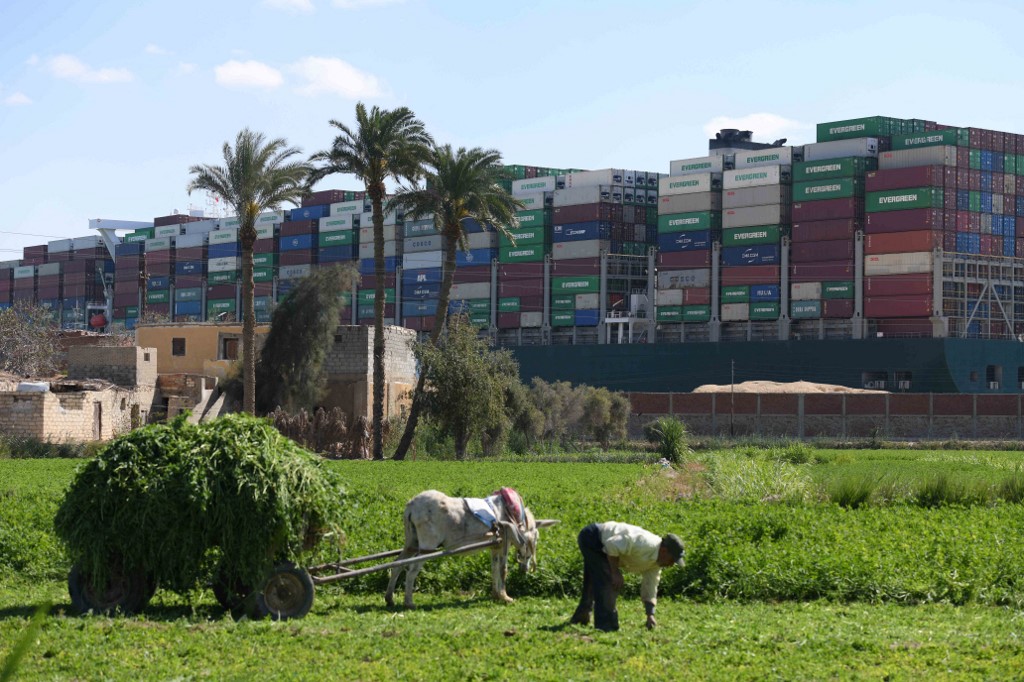 A farmer in the northeastern Egyptian city of Ismailiya, harvests grass for cattle in front of the MV 'Ever Given' (Evergreen) container ship, a 400-metre- (1,300-foot-)long and 59-metre wide vessel, lodged sideways and impeding all traffic across the waterway of Egypt's Suez Canal, on March 27, 2021. (Photo: AFP)

Egypt's Suez Canal Authority chief said Saturday that strong wind was not the main reason for the grounding of the MV Ever Given cargo ship in the waterway.

"Strong winds and weather factors were not the main reasons for the ship's grounding, there may have been technical or human errors," Osama Rabie said at a press conference in Suez.

"All of these factors will become apparent in the investigation," he added.

Asked when the ship could be afloat again, he suggested it was possible "today or tomorrow, depending on the ship's responsiveness to the tides."

The MV Ever Given, which is longer than four football fields, has been wedged diagonally across the canal since Tuesday, blocking one of the world's most vital waterways in both directions.

The canal authority chief said over 300 vessels are now treading water at either end of the canal, which links the Mediterranean and the Red Sea.

Addressing journalists in Suez, Rabie outlined Egypt's efforts with tugboats and excavators to free the bow and propellers of mega-ship in order to reopen the canal.

Rabie noted that on 10.30 pm Friday the propellers had been able to spin, although not at full speed.

However they were jammed again due to the changing tide, he said, adding that rescuers had had to resort to excavators again overnight to continue the dredging process.

"The type of soil we're dealing with is very difficult to manage, as are tides which affect the size of the vessel and its cargo load," he added.

Rabie also noted that the blockage had caused "no fatalities or pollution".

The ship's grounding is holding up some $9.6 billion worth of cargo each day between Asia and Europe, according to Lloyd's List data.

Rabie estimated that Egypt is losing some $12-14 million in revenue from the canal for each day it is closed.

The United States also said it was ready to send support, including a team of US Navy experts.

Rabie thanked the US for its support along with China and the United Arab Emirates.