MOSCOW, June 6 (Xinhua) -- Chinese President Xi Jinping said here Thursday that a stronger China-Russia comprehensive strategic partnership of coordination is of great importance to maintaining the interests of the two countries and their peoples, and to global peace, stability and prosperity. 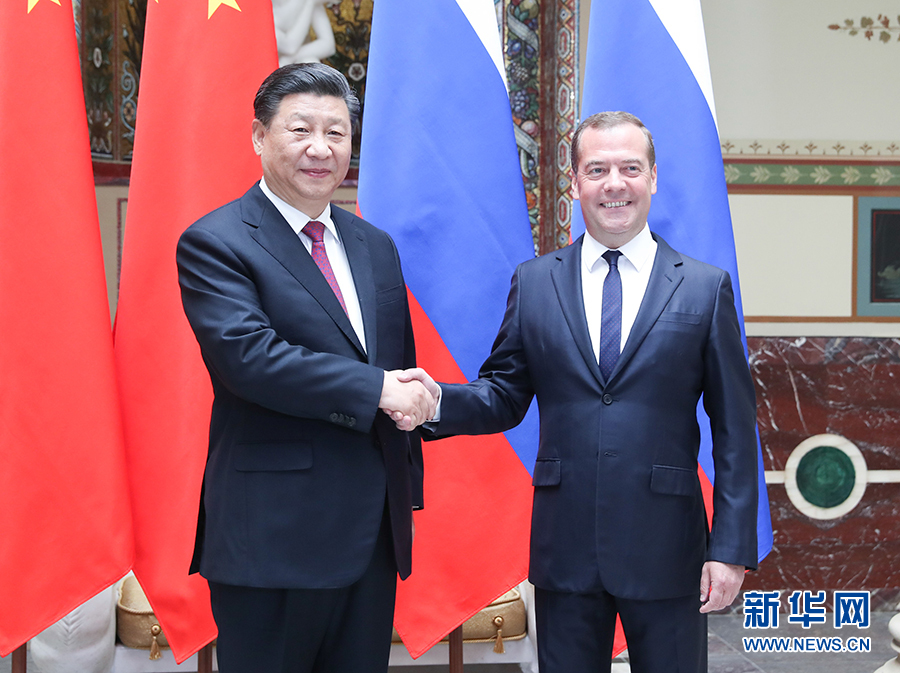 Xi made the remarks during his meeting with Russian Prime Minister Dmitry Medvedev.

This year marks the 70th anniversary of the China-Russia diplomatic ties, Xi noted, adding that the relationship between the two countries has been going forward at a high level, and has become a major-country relationship featuring the highest degree of mutual trust, the highest level of coordination and the highest strategic value, thus making a key contribution to world peace, stability and development.

Presently, the relations between the two countries have entered a new era, and the China-Russia comprehensive strategic partnership of coordination has been continuously enriched, said the Chinese leader.

Amid complicated international circumstances, particularly in the face of some illicit moves to curb the development of emerging economies, a stronger bilateral comprehensive strategic partnership of coordination between China and Russia is of great importance to maintaining the interests of the two countries and their peoples, as well as to global peace, stability and prosperity, Xi said.

Xi urged the two sides to make further efforts and push forward the bilateral all-around cooperation so as to bring more benefits to the two peoples and provide an even greater impetus for the two countries to grow and rejuvenate.

He also called on the two countries to strengthen their cooperation within the United Nations, the World Trade Organization, the BRICS, the Group of 20 and on other multilateral affairs in a bid to offer more China-Russia options to the international community. 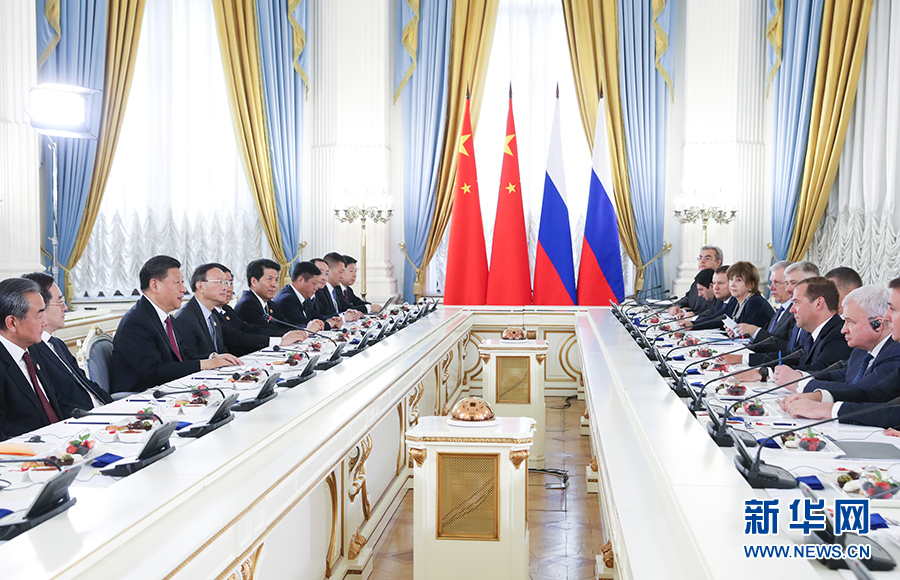 Medvedev noted that the Chinese and Russian presidents signed on Wednesday a statement that declared a new era for the bilateral ties, which bears great significance.

Currently, some individual country, regardless of the consequence, has blatantly violated the international law and the basic norms of international relations, bullied others with sanctions recklessly, and suppressed firms of other countries, which has hindered global economic growth and impaired the growth of global trade, he said.

These moves are short-sighted and destructive, the Russian prime minister added.

He called on the two sides to step up their strategic coordination, jointly cope with the common challenges facing the two countries and the international community, and to safeguard the world peace and development with concrete actions.

The Russian side is ready to join its Chinese counterpart in fully implementing the major consensus reached by the two heads of state, including the alignment of the Eurasian Economic Union and the Belt and Road Initiative, via such mechanisms as the regular meetings between the two countries' prime ministers, he added.

On Wednesday, during Xi's meeting with his Russian counterpart, Vladimir Putin, China and Russia agreed to upgrade their relations to a comprehensive strategic partnership of coordination for a new era.

During the meeting, the two heads of state highly evaluated the development of bilateral ties over the past 70 years, and agreed to uphold the notions of good neighborliness and win-win cooperation, develop a comprehensive strategic partnership of coordination for a new era in a bid to take bilateral ties to a higher level and better benefit the peoples of the two countries and the world as well.

Xi arrived here on Wednesday for a state visit to Russia. The visit, his eighth trip to Russia since 2013 when he was elected Chinese president, comes as the two countries are embracing the historic moment of the 70th anniversary of the establishment of diplomatic ties.

The Chinese leader will also attend the 23rd St. Petersburg International Economic Forum. He will address a plenary session to expound China's ideas on sustainable development and call for concerted efforts to safeguard multilateralism and improve global governance for the common development and prosperity of the world.