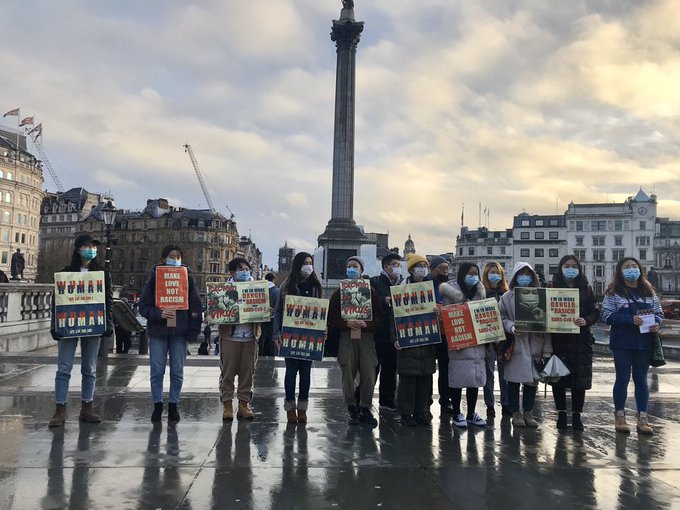 File photo shows Chinese students in London protesting the spike in racism against Asians following the coronavirus outbreak on February 17.

US politicians' referring to the novel coronavirus as the "Chinese virus" has made some Chinese students in the United States fearful of their personal safety and future.

We have heard about friends and people in the Chinese-American community verbally attacked and discriminated against for wearing masks on the street even before such a claim, said Zhao Jingyang, a Chinese student leader at the University of California, Berkeley.

"We are increasingly worried about rising extreme activities against our community after some US politicians repeatedly referred to COVID-19 as the 'China virus' or 'Chinese virus' in the past week."

Despite the WHO guideline, some US politicians decided to make this controversial and discriminatory claim－it's obvious that they are doing so deliberately, said Zhao, who added she was "irritated and disappointed".

Oleg Wang, a student at Ohio State University, said:"It feels to me like a kind of politicized demonstration with information that intends to distract people's attention from internal conflicts in the US."

Zhuozi, a graduate student at the University of Southern California who gave only her first name, said that after the "Chinese virus" posts, she started to feel less secure when visiting local Chinese neighborhoods.

"We've heard about at least two cases of local Chinese restaurants getting attacked－that put the Chinese student community on alert," she said.

Some organizations have initiated campaigns against the term "Chinese virus", with people writing on their masks "C for Coronavirus, not for Chinese", she said.

Speaking about the Chinese students' reactions, Zhao said: "Most of us Chinese international students remain quite rational－we are getting used to all kinds of voices. And we are all aware that our biggest enemy is the virus, not those whose opinion differs from ours."

Some extended their help beyond the student community. And the Chinese student association at Columbia University donated protective coveralls to the New York-Presbyterian Queens hospital.

Chinese students and alumni from UCB also partnered with local non-profit organizations to establish a coronavirus relief fund called Chinese American Stronger Together－Medical Supplies Fundraising for US Hospitals and raised more than $11,000 in 24 hours after launching the campaign.

"Still, recent developments put me off the idea of working in the US for some time after graduation," Zhao said.

Zhuozi, who has worked part-time at local education company ONPS International Summer School for several months, echoed the idea. She said she is reconsidering her plan to obtain a work visa after graduating this summer.

Staying in the US or going back to China after graduation has long been a dilemma for many students, including her, she said, but the outbreak and how events have unfolded in recent weeks became an impetus for many to choose their home country over the US.