Students turn up heat on Trump, lawmakers over gun control 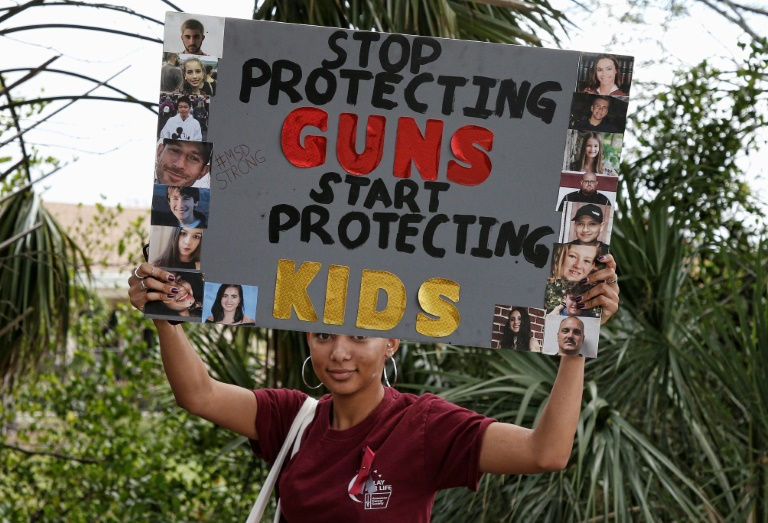 A student holds a sign during a protest against gun violence at Coral Glades High School in Florida. Photo: AFP/Rhona Wise

Angered by a shooting rampage that left 17 people dead at a Florida high school, students staged protests in several US cities on Wednesday to turn up the heat on President Donald Trump and lawmakers to take action on gun control.

Holding signs reading "Never Again" and "Be The Adults, Do Something," teenagers who survived last week's mass shooting at Marjory Stoneman Douglas High School in Parkland, Florida, rallied in the state capital Tallahassee.

"No longer can I walk the halls I walked millions of times before without fear and sadness," Stoneman Douglas student Florence Yared told a crowd at the Capitol which included thousands of supporters.

"No longer can I walk the halls without imagining bloodstains and dead bodies," the 17-year-old junior said. "All because of the damage that a single AR-15 rifle caused."

Lorenzo Prado, also a junior at Stoneman Douglas, said he was there "to demand change from my government." 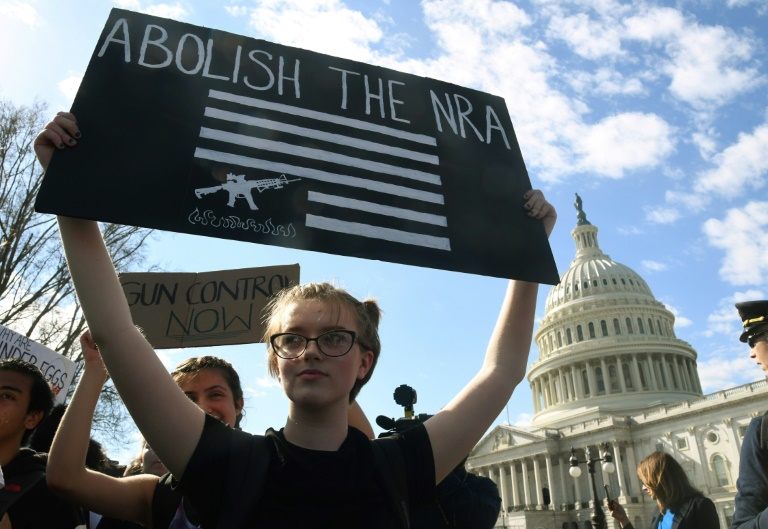 Hundreds of students from the District of Columbia, Maryland and Virginia staged walkouts and gathered in front of the US Capitol in Washington in support of gun control. Photo: AFP/Olivier Douliery

"To let these victims lives be taken without any change in return is an act of treason to our great country," Prado said, his voice choked with emotion.

Rallying in solidarity and inspired on social media by the activism of their peers, students staged walkouts from other high schools in Florida and elsewhere vowing to make the tragedy a turning point in America's deadlocked debate on gun control.

Hundreds of students descended on city hall in Minneapolis, Minnesota, and marched in other cities, including Chicago, the midwestern metropolis wracked by gun violence.

"The students were really enthused about making the connection between what happened in Florida, other school shootings, and the gun violence that they experience on a day-to-day basis here in Chicago," said Kofi Ademola, who works at the Youth Connection Leadership Academy in Chicago. 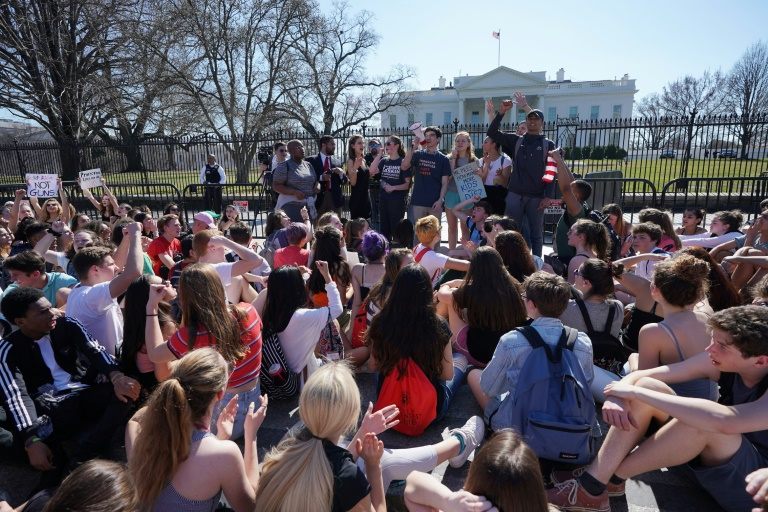 In Washington, hundreds of students gathered outside the White House chanting slogans against the National Rifle Association (NRA), the powerful gun lobby, and demanding action from Trump.

A girl with a megaphone read out the names of the 14 students and three teachers killed at Stoneman Douglas as the crowd of students held their arms up in the air.

Faced with the outpouring of grief and outrage over the Florida shooting, Trump was to meet with parents, students and teachers at the White House on Wednesday.

Students are also planning a march on Washington next month. The "March for Our Lives" is scheduled to take place on March 24, with sister rallies planned across the country. 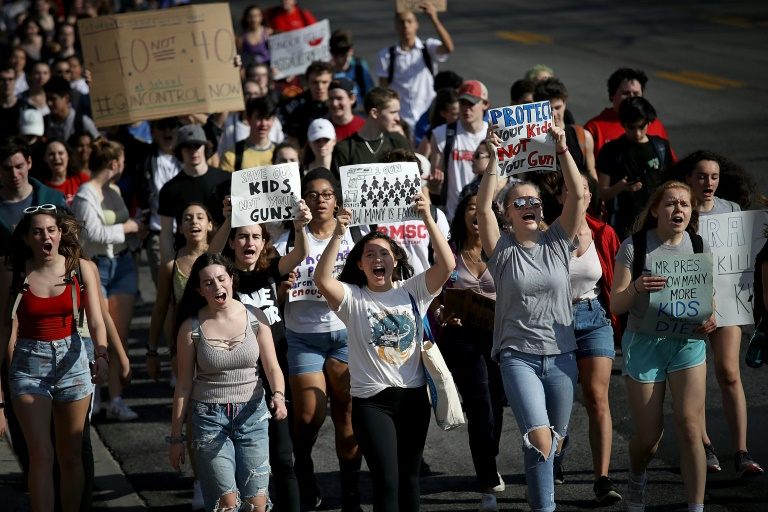 Trump -- who received strong backing from the NRA during his White House run -- is showing a new-found willingness to take at least some steps on gun control.

The president threw his support Tuesday behind moves to ban "bump stocks" -- an accessory that can turn a semi-automatic weapon into an automatic one.

Calls to ban bump stocks have been mounting since Stephen Paddock, a retired accountant, used them on several of his weapons to kill 58 concertgoers in Las Vegas in October 2017 in the deadliest mass shooting in recent US history.

More than 100 students from Stoneman Douglas travelled eight hours in buses to meet with state legislators and demand action on gun laws.

"My classmates and I are probably the most determined group of people you will ever meet," said student Sofie Whitney. 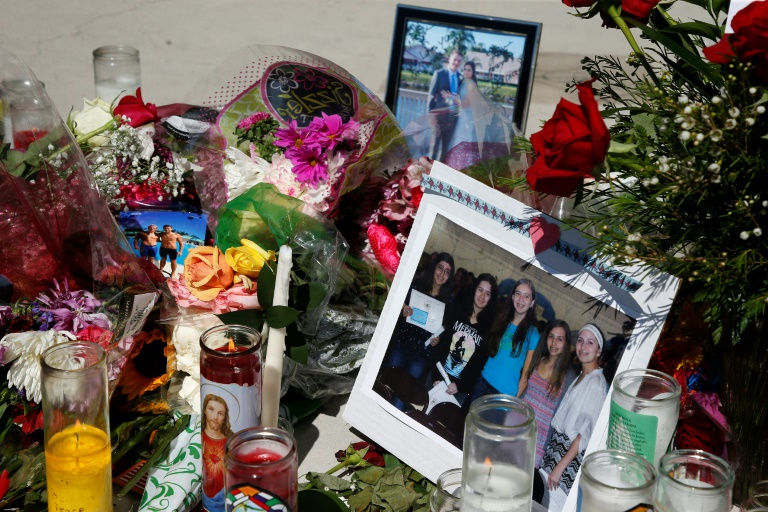 A memorial for victims of the shooting at Marjory Stoneman Douglas High School in Parkland, Florida. Photo: AFP/Rhona Wise

"People are talking about how we aren't serious because we're children, but... we're serious."

The students' push for change hit a hurdle on Tuesday when the Republican-dominated Florida House of Representatives declined to debate legislation that would have banned assault weapons and large-capacity magazines.

The US Congress is also deadlocked on the gun debate, accomplishing nothing despite a spate of mass shootings and polls showing that Americans support stricter gun laws by a two-to-one margin.

A Quinnipiac University poll released Tuesday found that Americans back tougher gun control laws by 66 percent to 31 percent -- "the highest level of support" since its first surveys in 2008.

Besides banning bump stocks, Trump said Tuesday he was looking for "evidence-based solutions and security measures that actually work."

"This includes implementing common sense security measures and addressing mental health issues," he said, "including better coordination between federal and state law enforcement to take swift action when there are warning signs."

Florida school shooter Nikolas Cruz, 19, had a history of troubling behavior and a person close to him warned the FBI five weeks before the shooting that he was a threat -- but no action was taken.

Cruz legally bought the gun he used in the attack -- an AR-15-style semi-automatic rifle -- and the White House said Tuesday it would consider raising the age for such purchases.