WORLD Study: COVID-19 infections in US may be twice more than reported

Study: COVID-19 infections in US may be twice more than reported 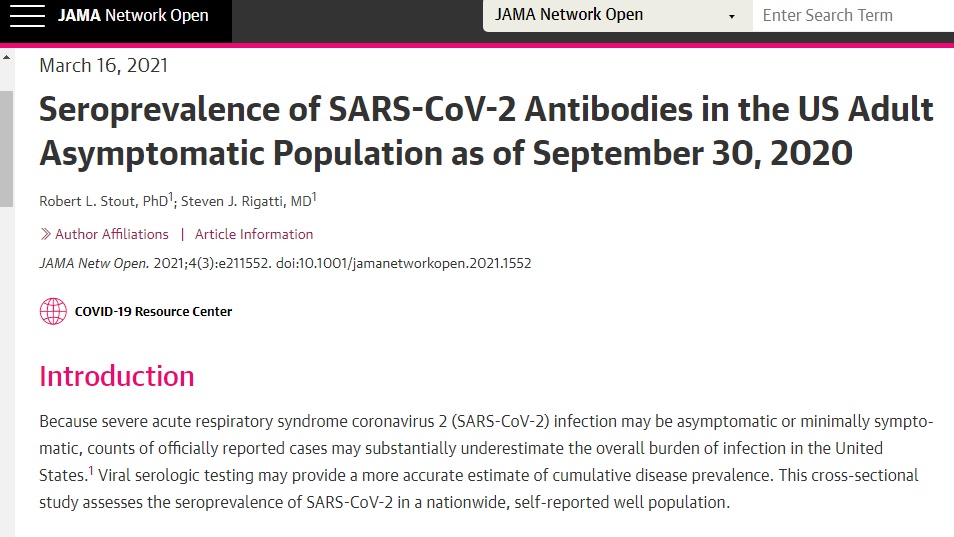 A screenshot of the study published on the JAMA Network Open website.

The actual number of COVID-19 infections in the US could have been more than twice the number of confirmed cases officially reported, according to a new study published on medical journal site JAMA Network Open on Tuesday.

Researchers at the Clinical Reference Laboratory conducted a large-scale study to test the prevalence of SARS-CoV-2 antibodies in 61,910 self-reported "well" adults and found that 4,094 or 6.6 percent of them were positive, although they said they never experienced symptoms.

Based on the result, the researchers estimated that 15.9 million asymptomatic or undiagnosed COVID-19 infections had occurred in the US as of September 30, 2020.

In contrast, the country only reported over 7.2 million confirmed positive cases by the end of September, according to data from Johns Hopkins University.

"Our estimate implied more than twice the number of infections than cases reported to Centers for Disease Control and Prevention, suggesting a more widespread pandemic," the researchers wrote.

The study validates the need for ongoing population-wide surveillance testing for COVID-19, the researchers said.