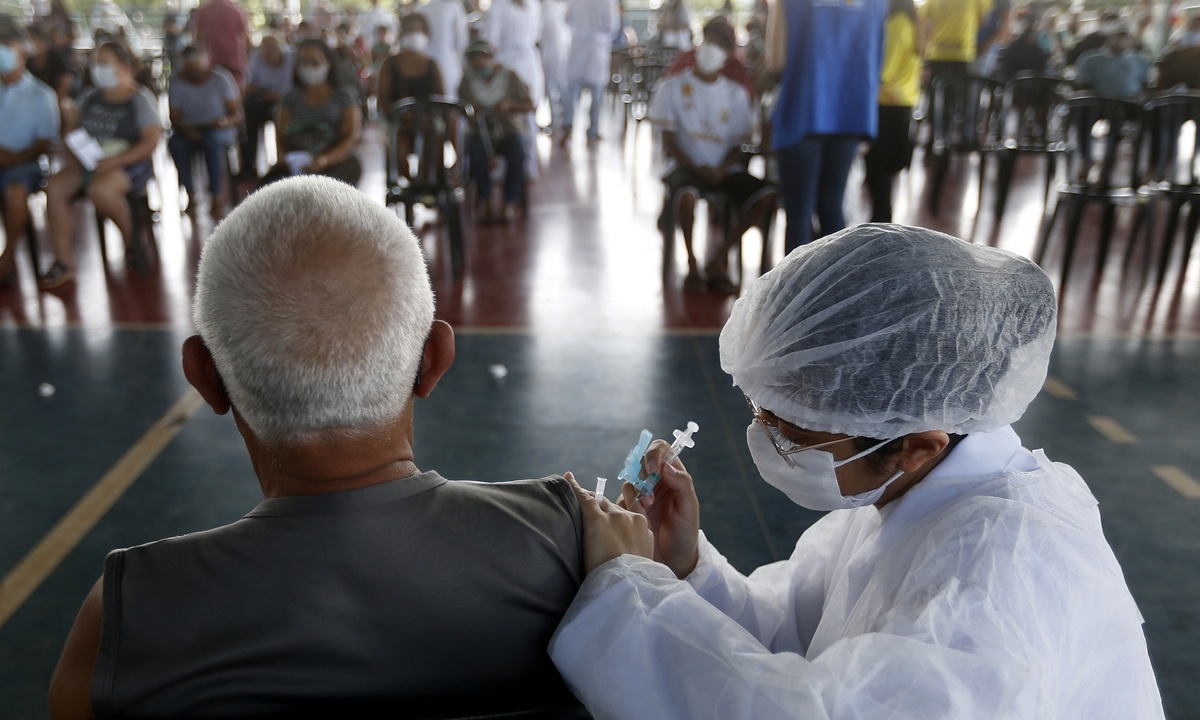 CoronaVac, the COVID-19 vaccines manufactured by Chinese producer Sinovac, showed an impressive efficacy in preventing the SAR-CoV-2 variant discovered in Brazil as data indicates that deaths and hospitalizations caused by the virus in the town of Serrana, in the region of Ribeirão Preto, decreased by 95 percent and 86 percent, respectively from February to April, after close to 60 percent of residents in the town were vaccinated.

Serrana's population inoculated with CoronaVac also indicated a significant decrease of 80 percent in symptomatic cases, according to a statement shared with the Global Times by Sinovac on Tuesday.

These are the main conclusions of the clinical study of effectiveness of Project S, an unprecedented study in the world coordinated by the Butantan Institute, a state funded scientific research center and Sinovac's partner in Brazil.

During eight weeks, between February and April of this year, around 27,000 residents of the town received the two doses of the CoronaVac with a gap of 28 days between the first and second doses. This represents a coverage of approximately 95 percent of the adult population of residents, according to the health census carried out by Butantan.

In total, the small Brazilian town of Serrana has a population of about 45,000, which means the vaccination rate during the Project S study was close to 60 percent.

The results came with the comparison of the data after the vaccination of all the groups was completed and all the trimester evaluated, according to the company's statement.

Another important conclusion of the study is the incidence of COVID-19 in Serrana in comparison with the nearby cities. Serrana has around 10,000 residents that work in Ribeirão Preto daily. However, while Ribeirão Preto and other cities in the region are presenting high levels of COVID-19 cases, Serrana maintained low numbers if compared to the cities with similar profile thanks to the vaccination.

The Project S is a milestone in the understanding of COVID-19 vaccine effectiveness. The use of CoronaVac led to a significant decline in cases and was not restricted to those who received the two vaccine jabs. This confirms the results of the Phase 3 clinical trial and is in line with the notion that the vaccine is able to control virus transmission if used on a large scale, Esper Kallas, Professor of Infectious Diseases at the University of São Paulo, said at a press conference on Monday.

The most vital meaning of the experiment in Serrana is that it showed how many people in China need to be vaccinated to build herd immunity with inactivated vaccines, Zhuang Shilihe, a vaccine expert from Guangzhou, told the Global Times on Tuesday.

According to data released by the National Health Commission of China, more than 639 million doses of COVID-19 vaccines have been administered in the country as of Sunday.

Without a national vaccination rate being released, some cities have individually published their local results. For example, the authorities in Beijing said that over 86 percent of its residents aged 18 and above had received at least one dose of a vaccine by Sunday.

CoronaVac is the most prevalent vaccine in Brazil thanks to Sinovac's cooperation with the Butantan Institute. The vaccine accounts for almost 80 percent of all the doses applied in Brazil, according to Xinhua News Agency.