WORLD Study links wildfires in US West to COVID

Study links wildfires in US West to COVID 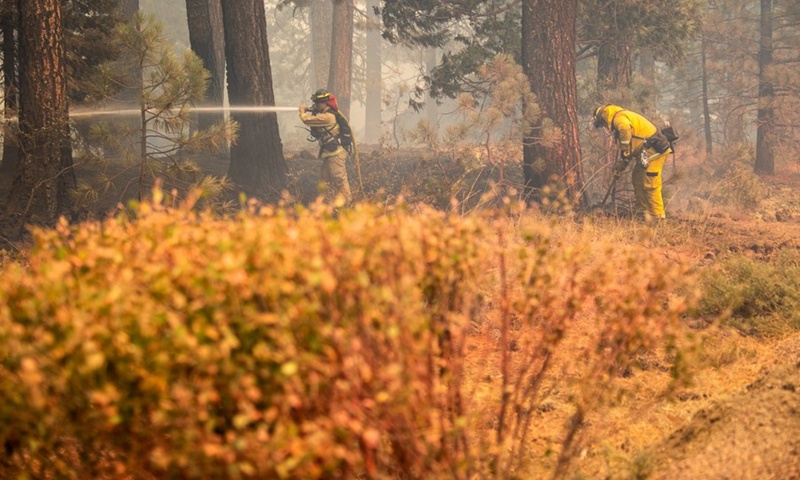 There were nearly 20,000 extra coronavirus infections and 750 COVID-19 deaths associated with exposure to wildfire smoke between March and December 2020 in the American West, researchers at Harvard University estimate in a new study.

The study — published on Aug 13 in the journal Science Advances — was done by the Harvard T.H. Chan School of Public Health and the Harvard School of Engineering and Applied Sciences.

Earlier studies have found evidence that air pollution can worsen the severity of COVID-19 symptoms and hasten the spread of the novel coronavirus, although there is still uncertainty regarding how particles and the virus interact.

The Harvard study is the first to show a statistical link between wildfire smoke and COVID-19 caseloads and deaths. The same team of Harvard researchers also published the first study to find a clear connection between long-term exposure to air pollution and COVID-19 death rates last year.

To investigate the connection between smoke and COVID-19, the researchers developed statistical models that analyzed data from 92 counties in California, Oregon and Washington state where wildfires occurred between March and December 2020. In those three states, more than 73,000 people have died of COVID-19 during the pandemic.

The study sought to eliminate causes of COVID increases other than nearby wildfires. It found that the wildfires had the largest impact on COVID cases in the counties of Butte, California, and Whitman, Washington. The study's models found that 18.2 percent of Whitman's COVID cases last year and 17.3 percent of Butte's could be linked to poor air quality on wildfire days.

"These results provide strong evidence that, in many counties, the high levels of PM 2.5 that occurred during the 2020 wildfires substantially exacerbated the health burden of COVID-19," the authors wrote.

A study published this year by scientists at the Desert Research Institute in Nevada found that the coronavirus positivity rate in Washoe County, Nevada, increased significantly during periods of high wildfire smoke.

The U.S. Centers for Disease Control and Prevention (CDC) says on its website that wildfire smoke can irritate lungs and "make you more prone to lung infections, including SARS-CoV-2, the virus that causes COVID-19".

Wildfire smoke contains high levels of the smallest, most dangerous type of soot known as PM (particulate matter) 2.5. Wildfire smoke may contribute up to half of the PM 2.5 in some parts of the western United States, according to researchers.

Scientists who study air quality say it is possible that smoke particles could carry the virus. They also say there are other possible dynamics involved, such as people tending to gather indoors to avoid wildfire smoke, which could lead to more interaction with infected people.

"Clearly, we see that, overall, this is a very dangerous combination," Francesca Dominici, a biostatistician at Harvard's T.H. Chan School of Public Health and senior author of the paper, told The Washington Post of the interplay between smoke and COVID-19. "It's a really scary thing as we continue to face these wildfires all around the world."

The research doesn't bode well for this year, Dominici told The New York Times, as wildfires started early, and the pandemic is still raging in the U.S. with the Delta variant that tends to be more contagious.

"I think the wildfires will have the same, if not worse impact on COVID-19 cases and deaths among the unvaccinated," she added.

Dominici noted that the analysis didn't include individual patient data or consider other factors such as mask mandates.

In 2020, California experienced five of the six largest wildfires in the state's recent history. A record 2.5 million acres burned during the that wildfire season, 20 times what had burned the previous year.

There are 107 wildfires currently burning in the U.S., which have scorched 2.1 million acres as of Saturday, according to the National Interagency Fire Center.

Last year's wildfires may well be surpassed in 2021. Huge blazes include the Bootleg fire in Oregon, which at one point was the size of Los Angeles, and the Dixie fire in Northern California, which is the largest in the state's recorded history. The town of Greenville, California, was almost completely destroyed by fire last week.

Smoke from the fires has been detected from space, sweeping as far east as New York, where it turned the skies hazy. On Aug 14, Denver, Colorado, experienced the worst air quality in the world for several hours due to smoke from western wildfires, according to IQAir, a Swiss air quality technology company. Later on day, Johannesburg, South Africa, moved to the top spot.