Succession this week to shrink Japan’s imperial heirs to 2 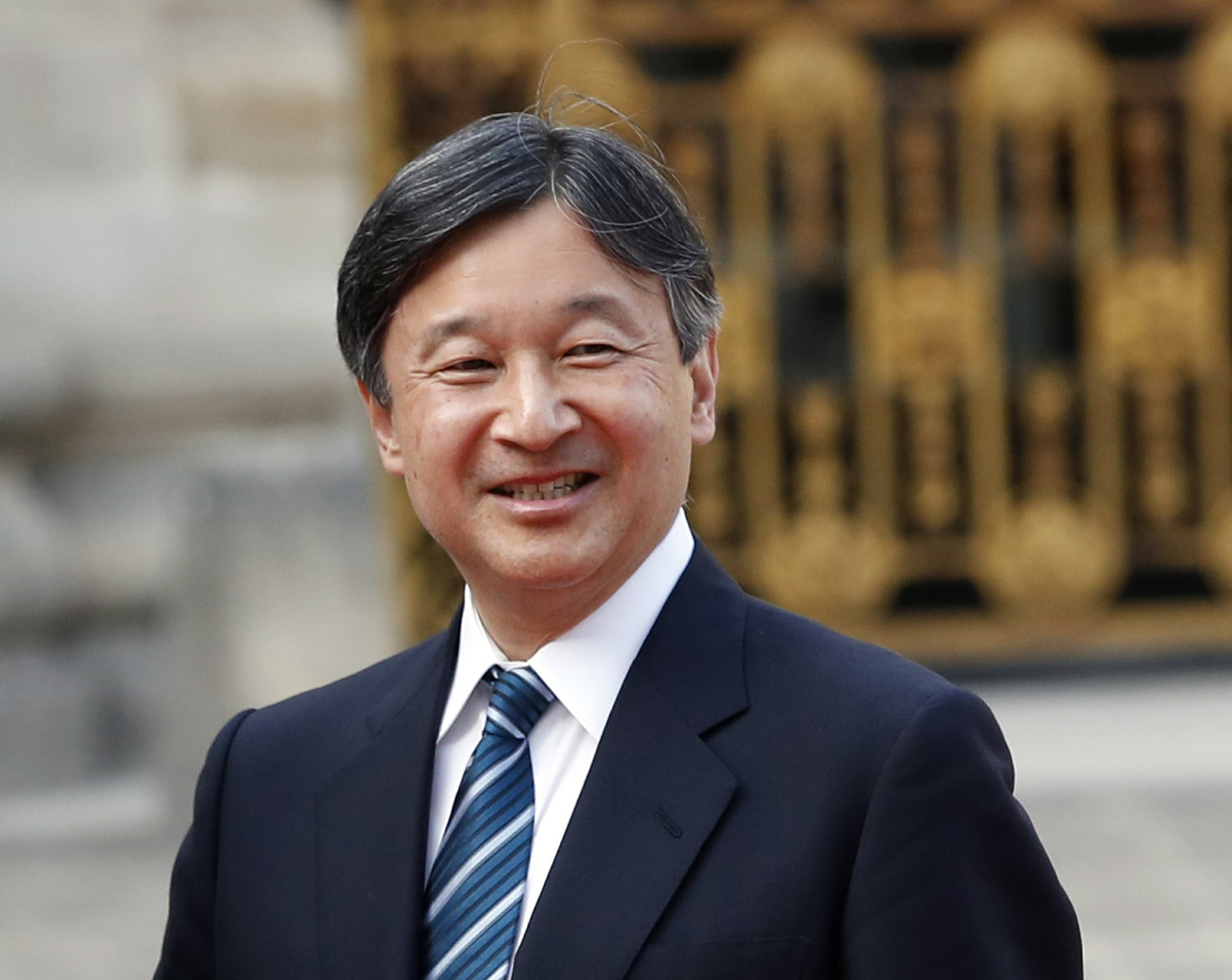 Japan's Crown Prince Naruhito is greeted by French President Emmanuel Macron before a meeting at the Chateau de Versailles in Paris on September 12, 2018. (Photo: AP)

Japan’s imperial family is relatively small and will shrink further in the coming years. Only one of Emperor Akihito’s four grandchildren is a male who can ascend to the throne. The three princesses likely will lose their royal status eventually, since they are required to do so if they marry commoners. Akihito’s daughter lost her imperial status after marrying a local government official.

A look at the imperial family as Akihito abdicates on Tuesday:

Akihito’s wife, born Michiko Shoda, is the daughter of a wealthy businessman who led the Nissin Flour Milling Co. She graduated from the University of the Sacred Heart with top honors in English literature and has written and translated children’s books. Michiko met Akihito at a 1957 tennis tournament remembered as a “love match,” and the couple married two years later.

Michiko was the first commoner to marry an emperor and was part of many changes Akihito brought to Japan’s ancient monarchy. They broke tradition by raising their three children instead of leaving their care to palace staff. They traveled around Japan, reaching out to those with disabilities or other difficulties. When the couple met people coping with disasters, Michiko led the interactions, typically kneeling on the floor “Heisei style,” named after Akihito’s era.

Naruhito, whose name in Chinese characters means a virtuous person, will ascend the Chrysanthemum Throne on Wednesday as the 126th emperor in a line dating to the fifth century. A historian and a viola player, Naruhito is Japan’s first emperor-to-be to have studied abroad and could expand his role to global issues. He has pledged to inherit his father’s devotion to peace and compassion for the people, while exploring his own style.

Naruhito married a Harvard-educated former diplomat, Masako. After graduating from Gakushuin, a private school for former aristocrats, Naruhito studied at Oxford University and authored a paper on the historical Thames River water transportation systems. His only child is Princess Aiko, 17.

Harvard-educated Masako Owada had a promising future as a diplomat when she captured Naruhito’s eye at a 1986 tea party. It took Naruhito seven years of waiting, during which Masako studied at Oxford and refused him twice. She finally accepted his proposal and the two married in 1993.

Despite growing expectations that she may help modernize and internationalize the palace, Masako has largely receded from the public since the early 2000s after giving birth to daughter Aiko and developing stress-induced depression. In 2004, Naruhito subtly criticized the heated attention and pressure placed on Masako to produce a boy while depriving her of foreign visits. Naruhito says Masako is steadily recovering and hopes to gradually expand her role.

The only child of Naruhito and Masako would have been next in line to the throne if born in a gender-equal nation. But Japan’s Imperial House Law only allows males to rule. As a child, Aiko enjoyed watching sumo and memorized wrestlers’ names and ranks. Having parents who studied in Britain, Aiko has participated in a summer program at Eton College.

The younger of Akihito’s two sons, Fumihito is better known as Akishino, his childhood title, and will be crown prince during Naruhito’s reign. His future stint will be short, if at all, and there is speculation that Fumihito may skip his turn and hand it to his 12-year-old son, Prince Hisahito. Affectionately known as prince “catfish,” his research subject, Fumihito has visited Thailand a number of times to study fisheries and the domestication of chickens.

He met his wife, Kiko, at Gakushuin University, where both were students. Contrary to his brother’s attentive team-player image, Fumihito is said to be free-spirited and outspoken, at times critical of his elder brother. He and Kiko have two daughters and a son.

Kiko, formerly Kiko Kawashima, grew up in the U.S. and Austria and lived in modest housing after returning to Japan. She was called the “apartment princess” when she married Fumihito in 1990. Twelve years after the couple had their second daughter, Kiko gave birth to Hisahito in 2006 amid intense attention on a possible male heir. Hisahito’s birth halted a government debate on whether to change the succession rules to allow a female emperor.

The only male of Akihito’s four grandchildren, Hisahito will be second in line to the throne when the new era begins, and there is nobody left after him. The male-only succession rules maintained by the government and its right-wing supporters put him on the spot, with heavy pressure to produce a male heir. Akihito’s abdication reminded the government of a need to resume discussion on how to maintain the royal population and a stable succession.

The oldest of Akihito’s four grandchildren and sister of Hisahito, Mako has been a target of tabloid coverage due to her boyfriend’s family debt scandal that pushed back their planned marriage to 2020 amid growing uncertainty. Her college classmate and boyfriend, Kei Komuro, is now studying law at Fordham University in New York.

The second-oldest of Akihito’s grandchildren, Kako recently graduated from International Christian University in Tokyo, where she studied psychology. She won’t seek a job and is expected to take on official duties as a member of the royal family. Kako spent a year studying performing arts at Leeds University in Britain and enjoys hip-hop dancing. She has published photo books as her looks and fashion gained followers.