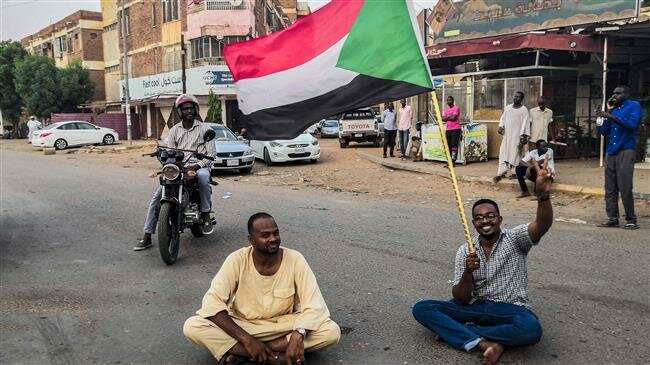 A Sudanese man sits with another on the ground in a street while waving a national flag during a demonstration against the country's ruling generals in the capital Khartoum on June 30, 2019. (Photo by AFP)

"The forces of the Freedom and Change Alliance have met and decided to respond to the invitation for direct negotiations according to basic observations. The most important of them is that we should receive a written copy of the mediation's proposed document containing the amendments which we have suggested," said Madani Abbas Madani, a leading figure in the alliance, at a press conference in Khartoum.

He further reiterated importance of rebuilding the confidence between the two parties through what he termed as procedures including releasing the detainees, recovering the internet service and forming an independent investigation committee on incidents of dispersing the sit-in area in front of the army's general headquarters.

The African-Ethiopian mediation team on Tuesday invited the two parties to a meeting on Wednesday to discuss the issues of differences in direct talks.