WORLD Sudanese vow to keep up protests after deadly clashes

Sudanese vow to keep up protests after deadly clashes

Furious Sudanese anti-coup protesters vowed Friday to press ahead with a campaign of civil disobedience, following deadly clashes with security forces during demonstrations against a widely condemned military takeover. 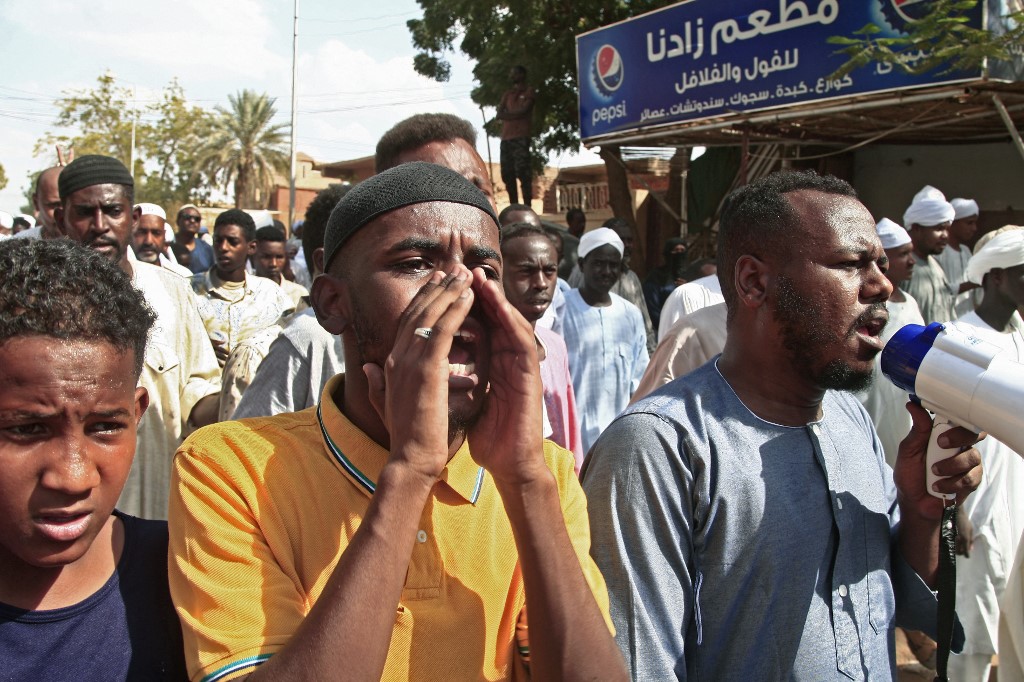 Supporters of the Umma Party, Sudan's largest political party, chant slogans during a protest against a military coup that overthrew the transition to civilian rule, on October 29, 2021 in the capital Khartoum's twin city of Omdurman. (Photo: AFP)

At least eight people have been killed and 170 wounded in protests since the army's power grab earlier this week, medics said, adding that security forces have fired tear gas, live rounds and rubber-tipped bullets at demonstrators.

As the country braces for mass protests planned for Saturday, the US and the UN called on Sudan's military to show "restraint".

A US official estimated that 20 to 30 people have been killed since Monday and said security forces must "refrain from any and all violence against protesters".

Saturday's anti-coup rallies will be a "real test" of the military's intentions, the US official said on condition of anonymity.

UN Secretary-General Antonio Guterres said Sudan's "people must be allowed to demonstrate peacefully and this is essential".

In Khartoum-North, security forces fired tear gas at hundreds of protesters who took to streets chanting "down with the military," according to witnesses who spoke on condition of anonymity for fear of reprisal.

Sudan had been ruled since August 2019 by a joint civilian-military council, alongside Prime Minister Abdalla Hamdok's government, as part of the now stalled transition to full civilian rule.

Hamdok is under effective house arrest, while other civilian leaders are in military detention.

"Confronting peaceful protesters with gunfire is something that should not be tolerated," protester Haitham Mohamed said in Khartoum, which has been rocked by days of unrest.

"It will not make us back down."

Protests spread Friday to Khartoum's twin city of Omdurman, with demonstrators chanting "down with the military rule" outside a mosque.

In Khartoum and Omdurman, security forces in armoured vehicles deployed in large numbers ahead of Saturday's planned protests.

Amnesty International said security forces on Monday had killed at least six people and wounded 140 others "by shooting live rounds into multiple crowds of protesters" in Khartoum.

"The world is watching and will not tolerate further bloodshed," the rights group said.

Burhan, a senior general under the three decades of Bashir's iron-fisted rule, has insisted the military's takeover "was not a coup" but only meant to "rectify the course of the Sudanese transition".

At Muslim Friday prayers broadcast on state-run television and well-attended by soldiers in uniform, an imam similarly urged worshippers to call the takeover a "well-timed rectification".

"Our loyalty and love should be for the security forces," he said.

Soldiers from the army and the much-feared paramilitary Rapid Support Forces patrolled the streets of Khartoum, as well as Khartoum-North and Omdurman across the Nile River.

Heavily armed security forces tore down protest barricades of tyres and rocks blocking roads, and carried out random searches of people and cars.

The internet has been widely blocked, and shops are largely closed in Khartoum. Many civil servants are refusing to work until the transitional government is restored.

The coup was the latest in the impoverished country, which has experienced only rare democratic interludes since independence in 1956 and spent decades riven by civil war.

It prompted international condemnation and several punitive measures, with the World Bank and the United States freezing aid -- a move that will hit hard in a country already mired in a dire economic crisis.

The coup was a "grave setback", US President Joe Biden said Thursday, while the African Union has suspended Sudan's membership for the "unconstitutional" takeover.

Protesters are gearing up for what they hope will be a "million" strong march against the military on Saturday.

"We are setting out tomorrow to tell the world that we want a democratic transition, and we don't want military coups," said Taha Abdelrahman, a protester from Omdurman.

Foreign Minister Mariam al-Mahdi, the daughter of Sudan's last democratically elected prime minister who was ousted in Bashir's 1989 military coup, is one of the few civilian leaders not in detention, and has become a leading critic of Burhan.

"We clearly reject any coup... we also resist it with all civil means," she told Al Arabiya television.

Several Sudanese diplomats -- including to the US, China and the European Union -- have openly rejected the military seizure of power, prompting Burhan to sack them.