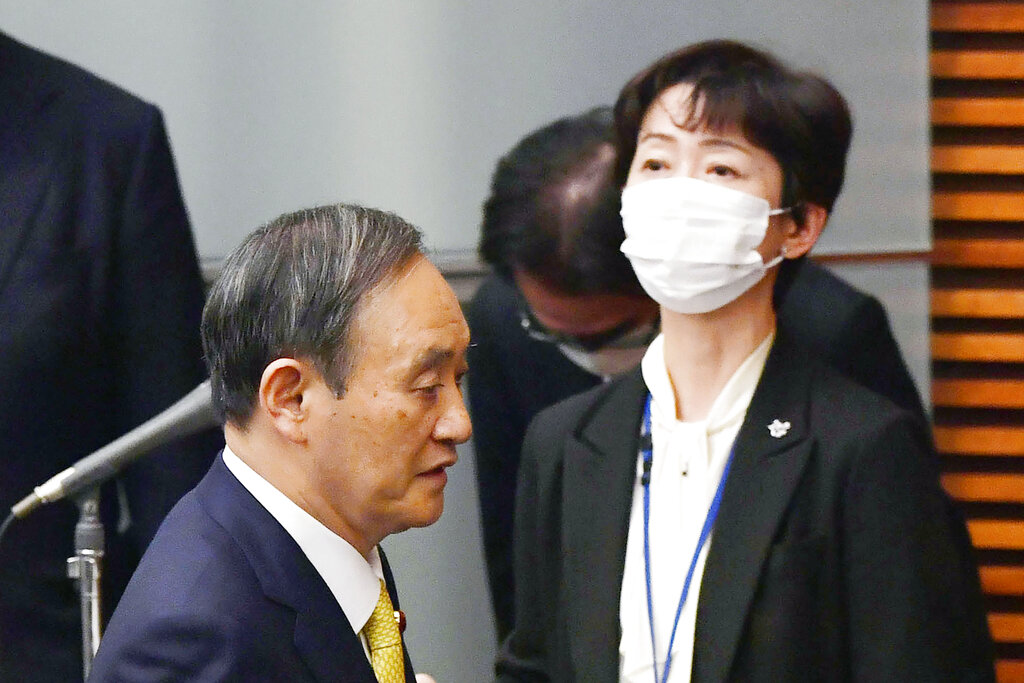 Japanese Prime Minister Yoshihide Suga arrives for a press conference past his cabinet's public affairs official Makiko Yamada, right, at his official residence in Tokyo on Dec. 4, 2020, Yamada, public relations chief for Suga, has resigned Monday, March 1, 2021 after she acknowledged she had a 70,000 yen ($700) dinner paid for by a broadcaster. The broadcaster in question employs Suga’s son, Seigo Suga. (File photo: AP)

The public relations chief for Japan's prime minister has resigned after she acknowledged she had a 70,000 yen ($700) dinner paid for by a broadcaster.

Makiko Yamada had been grilled recently by opposition lawmakers in Parliament about the 2019 dinner and had been scheduled to answer more questions Monday. She had previously said she did not remember or was not fully aware of the circumstances.

The broadcaster in question, Tohokushinsha Film Corp., employs Suga’s son. That has raised suspicions of cronyism in a nation where plum jobs are often hard to come by without connections.

Accepting lavish wining and dining is a violation of regulations overseeing bureaucrats’ ethics. There were several such dinners the ministry officials had allegedly accepted, including cab fares.

Other ministry bureaucrats reportedly at the dinner have been penalized. The president of Tohokushinsha resigned last month.

Government spokesman Katsunobu Kato told Parliament on Monday that Yamada resigned. She was hospitalized for two weeks for an illness and can’t carry on her duties, and Suga accepted the resignation, Kato said. Details of her sickness were not given.

Yamada had held other bureaucratic jobs, including at the ministry overseeing telecommunications. Suga was a minister there before becoming prime minister.

The ministry has the authority to award bandwidth usage rights to broadcasters.

Public anger against Suga’s administration has been growing amid the scandals and as Japan pushes ahead with the Tokyo Olympics despite the coronavirus pandemic.

Yamada had been seen as a role model of female leadership in a nation that has lagged in gender equality.