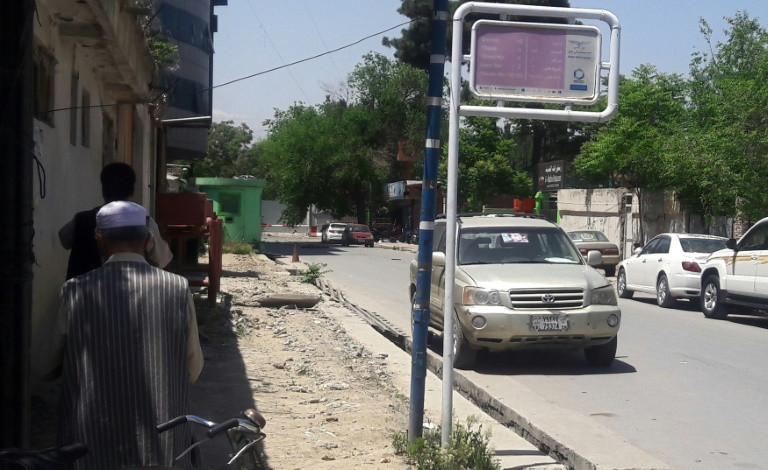 The second of two Kabul attacks Wednesday took place in front of a police station in Shar-e-Naw neighbourhood in central Kabul (Photo: AFP)

A series of loud explosions rocked the Afghan capital in the late morning and were quickly followed by volleys of gunfire as police engaged in fierce battles with militants. Another explosion was heard in the late afternoon.

The Taliban and Islamic State group each claimed responsibility for one of the attacks. But Afghanistan's intelligence agency blamed the Taliban's Haqqani Network and Pakistani militant group Lashkar-e-Taiba for both incidents.

At least five people were killed and 16 were wounded in the attacks, interior ministry spokesman Najib Danish said.

The health ministry said seven people were killed and 17 wounded.

Police were among the casualties, including two of the dead, Danish told Tolo News.

After an easing of attacks in Kabul in February, Taliban and IS militants have stepped up raids in the city in recent months.

IS claimed the first attack on a police station in a heavily Shiite-populated neighbourhood in the city's west, which interior minister Wais Barmak said ended after roughly an hour.

Barmak told reporters three attackers were killed in that incident, after they used grenades to set fire to a room in the police compound.

Ariana TV footage showed a thick plume of black smoke rising into the sky while a photo posted on Twitter purportedly of the west Kabul police station showed a building on fire.

The second attack, claimed by the Taliban, took place in front of a police station in Shar-e-Naw neighbourhood in downtown Kabul.

"A suicide bomber detonated his vest at the entrance of the street and a car dropped four other attackers nearby," Barmak said.

Four attackers fled to a nearby building and were killed after an hours-long search operation by security forces, police spokesman Hashmat Estanikzai told AFP.

A "clearance operation" is still under way, he added.

A travel agency that handles Indian visa applications is located on the same street as the Shar-e-Naw police station. The Indian embassy and some of its consulates in Afghanistan have previously been targeted by the Taliban.

"There were about 300 people inside Shaheer travel agency. Had the police not stopped the attackers they would have caused a disaster," Barmak said.

A police source told AFP the blast in the afternoon was caused by an attacker blowing himself up.

Pakistan condemned the attacks as "blatant terrorism targeting innocent civilians" in a statement from the country's foreign affairs ministry.

The attacks came as a strong 6.2-magnitude earthquake rocked Afghanistan, shaking buildings in Kabul where people were already on edge.

The assaults happened just over a week after twin blasts in Kabul killed 25 people, including AFP chief photographer Shah Marai and eight other journalists.

Those attacks were claimed by IS.

The Taliban recently launched their annual spring offensive, in an apparent rejection of a peace talks overture by the Afghan government.

Their Operation Al Khandaq will target US forces and "their intelligence agents" as well as their "internal supporters", a Taliban statement said on April 25.

Kabul has long been one of the deadliest places in Afghanistan for civilians.

A suicide bomber targeting a blood drive for victims of recent attacks blew himself up in a city park on Monday after being spotted by police, causing no other casualties.

On April 22, a suicide bomber detonated himself outside a voter registration centre in the city, killing 60 people and wounding more than 100.

That was among a series of attacks across the country in places where people were signing up to vote.

The Taliban and IS have made clear their intentions to disrupt the parliamentary and district council elections scheduled for October 20.

General John Nicholson, who leads US and NATO forces in Afghanistan, said previously that protecting Kabul was a priority for foreign troops.

But he acknowledged that preventing attacks would be challenging in the sprawling city that is poorly mapped and extremely porous.