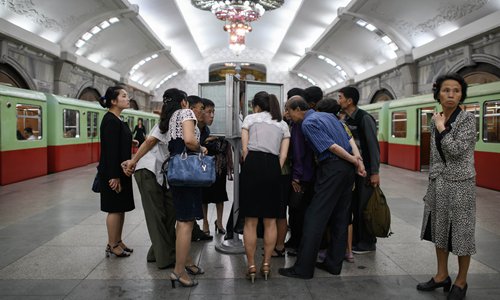 Commuters read a copy of the Rodong Sinmun newspaper showing the meeting between North Korean leader Kim Jong-un and US President Donald Trump, at a newsstand in the Pyongyang metro on Wednesday. Trump accepted an invitation from Kim to visit North Korea during their historic summit, Pyongyang state media reported on Wednesday, as the US president said the world had jumped back from the brink of "nuclear catastrophe." (Photo: AFP)

Heated discussions on the historic summit between North Korean leader Kim Jong-un and US President Donald Trump among Chinese have yet to subside, and some Chinese have high expectations of business opportunities in North Korea once the Korean Peninsula enjoys permanent peace.

The Kim-Trump summit in Singapore on Tuesday has become one of the hottest topics on Chinese social media platform Sina Weibo, with the page "Kim-Trump summit" receiving more than 130 million views as of press time.

Most Chinese netizens hailed the summit and hoped it would end tensions on the peninsula and bring stability and peace to the region. Others believe that the summit will soon lead to an opening-up and business opportunities in North Korea.

"China and North Korea have mutual trust and friendly ties, which is our advantage over other countries' investors. Now is probably the right time to consider reentering North Korea," a businessman surnamed Zhang from Dandong, a city bordering North Korea in Northeast China's Liaoning Province, told the Global Times.

Zhang used to have a seafood business in North Korea. But his delivery trucks were blocked following international sanctions against North Korea, which hurt his business in 2017.

Aside from business, some Chinese are also eager to visit North Korea once the situation stabilizes.

A Beijing resident surnamed Liu, 28, who visited Pyongyang in 2016, told the Global Times that "if North Korea becomes more open and allows greater independent travel, I will definitely go there again."

North Korea bans independent travel for foreigners, and only allows tourist groups to visit selected locations. Official tour guides will accompany them at all times.

However, some analysts warned against being overly optimistic about North Korea's opening-up since there is still long way to go for North Korea to set up the legal and physical infrastructure for the opening-up, and it will take at least several years for North Korea to normalize ties with major economies like the US and Japan.

Although the Kim-Trump summit shows the potential for future economic development, it is too early to have high expectations of business opportunities in North Korea, Cheng Xiaohe, an associate professor at the Renmin University of China's School of International Studies, told the Global Times on Wednesday.

"The opening-up of North Korea requires a firm determination and concrete policies from the government and the establishment of formal diplomatic ties with other major economies, especially the US and Japan, and the lifting of all sanctions against North Korea. This will take at least 3-5 years," Cheng said.

"North Korea is not a place where you can get gold everywhere," Cheng said.

Aside from external factors like sanctions, North Korea's laws, regulations and political system are not ready for a massive opening-up, Zheng Jiyong, director of the Shanghai-based Fudan University's Center for Korean Studies, told the Global Times on Wednesday.

Before Trump's press conference on Tuesday at the Capella Hotel in Singapore, the White House showed a video to journalists on a possible economic boom in North Korea following denuclearization.

Trump also told media that he had discussed the potential of North Korea's economic development with Kim.

Trump said, "Think of it from a real estate perspective. You have South Korea, you have China, and they [North Korea] own the land in the middle. How bad is that, right? It's great," according to a White House transcript.