Summit without Syria paves way for Syria amid power wrestling 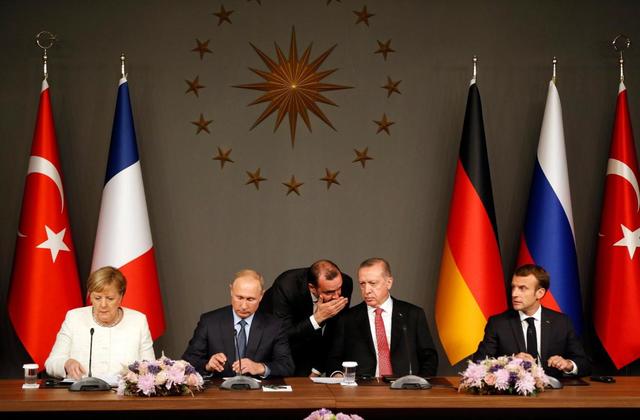 CAIRO, Oct. 28 (Xinhua) -- A four-party summit held in Istanbul of Turkey on Saturday seemingly paved a promising path for Syria, with Syria itself absent from the discussion.

Speaking at a joint press conference following the quadrilateral summit in Istanbul, Erdogan said that the summit had "a fruitful and sincere consultation", called for the completion of the constitution committee's process in Syria as soon as possible, reaffirmed its strongest opposition to the use of chemical weapons by any party in Syria, among others.

The United States, which has heavyweight influence in Syria, was also absent from the gathering where leaders of Turkey, Russia, Germany and France, each bearing own agenda and pursuing own interests in the region, mulled the fate of Syria.

Analysts, experts and former officials in the region shared their views about the summit held at the Ottoman-era Vahdettin Pavillion in Istanbul, and highlighted the power wrestling or political chases surrounding a solution of the Syria issue.

Cahit Armagan Dilek, head of the Ankara-based 21st Century Turkey Institute, told Xinhua that the region is in a period of defining "new balances, new alliances, and even new borders."

"All the four countries in the summit are one way or another at the battle zone in Syria and it is obvious that each of them has different agendas and interests in the region," he added.

In Dilek's view, neither Syria nor the Middle East will return to their pre-war times, and the region will continue to be a location of power wrestling by global powers.

"Turkey and Russia are actually on the Eurasia bloc while France and Germany represent the Western side at the summit," he said, describing Russia's hand in the field as "very strong."

"Russia has prevented the fall of the Syrian regime, ensuring the dominance of Damascus throughout the country, in exchange for establishing two long-standing permanent military bases," Dilek explained.

In addition, he said, Moscow also has a large naval base that strengthens Russia's hand in showing a constant presence in the eastern Mediterranean Sea, controlling Syria's exit to the world through the sea.

"By deploying S-300 and S-400 missile systems, Russia has also got the advantage of generating wide-range impacts," he added.

However, France and Germany have no significant presence in the field. France occupies a military presence in the east of the Euphrates in the US -controlled area while Germany has a limited unit of special forces with little economic support for the region.

Turkey has long been stuck in Syria due to the US support for the outlawed Kurdish Workers' Party and its affiliates in Syria. Furthermore, establishing close ties with Russia damaged Ankara's relations with Washington.

"Turkey always wants to give a message that it is cooperating with both sides. But Washington has been forcing its ally for a final decision," he said.

Dilek believed that Russia aimed to cause some cracks within the North Atlantic Treaty Organization (NATO) and succeeded to some extent.

Analysts agreed that Ankara has been playing an important role in shaping the developments in the region and it is "as strong as Russia" in the field.

Enes Bayrakli, European Studies Director for think tank foundation SETA, said the cooperation between Turkey and Russia produced several achievements not only for the two countries but also for the European bloc as well.

"For example, Turkey's cross-border military operations removed the pressure of terror threat from the shoulders of the European countries," Bayrakli told Xinhua.

He also said the European countries, mainly Germany and France, might feel "compelled" to involve in such a summit on Syria and take action as the United States started to shun.

"The US was the least affected country by the developments in Syria. It was not subjected to any terror attack originated from Syria and hasn't received any refugee," Bayrakli said.

Some analysts in Syria expressed cautious optimism on the summit results, particularly due to the participation of Germany and France, which are outspoken critics of the administration of Syrian President Bashar al-Assad.

Meanwhile, forming a commission to create Syria's post-war constitution, seen as an important step in staging elections in the war-torn country, was another focus of the summit.

The UN envoy to Syria Staffan de Mistura also attended the summit and discussed the matter of forming a constitutional committee.

"I believe it is necessary for this committee to consist only of Syrian nationals with no foreign members, for it will be a pure national Syrian issue and there should be no foreign interference in drafting Syria's constitution," said Hani Khallaf, a political expert and Egypt's former assistant foreign minister for Arab affairs.

Khallaf also stressed the importance of keeping Idlib stable and secure, noting maintaining cease-fire was key to stop the bloodshed in Syria.

Ankara and Moscow agreed in September at a bilateral meeting held in Russia's coastal city of Sochi to establish a demilitarized zone in Syria's northwestern province of Idlib, the last rebel stronghold in Syria, urging rebel groups to evacuate.

Under the deal, Russia and Turkey decided to carry out joint patrols in the area to prevent further fighting.

Emad Salem, a political expert, said Turkey may have to "shuffle the cards" especially after failing to push the radical rebels out of the demilitarized zone as it pledged.

The ultra-radical rebels were supposed to withdraw from the zone by Oct. 15, but this didn't happen with the al-Qaida-linked ones refusing to abide by the deal.

The Syrian government previously welcomed the Turkish-Russian deal, but with a few reported breaches by the rebels and their reluctance to leave, Damascus made it clear that its patience has limits.