British Conservative Rishi Sunak on Sunday announced he is standing to be prime minister, just weeks after failing in a first attempt and setting up a potentially bruising battle with his former boss Boris Johnson. 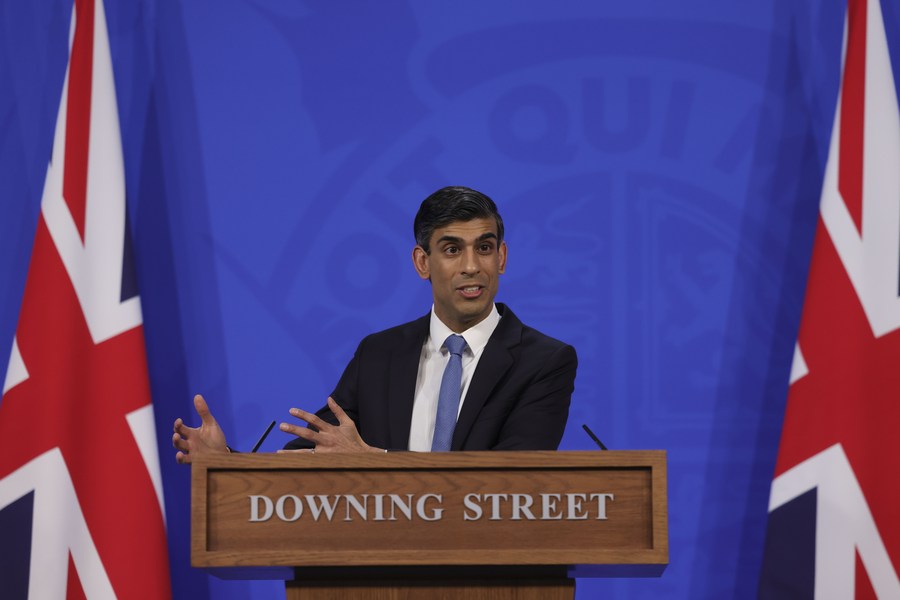 Former British Chancellor of the Exchequer Rishi Sunak speaks during a press conference in London, Britain, on Feb. 3, 2022. (Handout via Xinhua)

Ex-finance minister Sunak said he had a "track record of delivery" as he vowed to lead Britain out of a period of "profound economic crisis", which experts say has been worsened by the aborted policies of outgoing leader Liz Truss.

"I want to fix our economy, unite our party and deliver for our country," he said in a short statement posted on Twitter confirming his widely expected candidacy.

The no-frills announcement contrasted with his last failed bid to be Tory leader, when he faced criticism for a slickly produced video launched just days after he had helped depose ex-prime minister Johnson by resigning in July.

Sunak is the second Conservative MP to declare a run at the top job after cabinet member Penny Mordaunt launched her campaign on Friday.

Johnson, 58, is also anticipated to enter the potentially week-long contest, after he cut short a luxury Caribbean holiday to return to Britain Saturday and attempt an audacious political comeback less than two months after leaving office.

He is said to be intensely lobbying Conservative colleagues ahead of a Monday deadline to secure the 100 nominations required to face a vote of Tory MPs.

Sunak has raced ahead in that count, with the 42-year-old crossing the minimum threshold Friday and currently boasting the public backing of 129 Tory lawmakers, according to a BBC tally.

That compares to Johnson's 53 and 23 for Mordaunt, though the ex-leader's allies insist he has already amassed the 100 nominations.

The Tories have been forced into this second, now expedited, leadership contest since the summer following Truss's resignation after only 44 disastrous days into her tenure over her calamitous tax-slashing mini-budget.

If two candidates remain after Tory MPs vote Monday, the Conservatives' approximately 170,000 members will get to make their choice next week, with Johnson still seen as the favourite of the grassroots.

The divisive Brexit architect only relinquished power in early September, two months after announcing his resignation following a government revolt over a slew of scandals.

Amid growing calls for unity within the fractured ruling party, he and Sunak held talks running late into the night, reports said Sunday, as the feuding political heavyweights battle behind the scenes.

Few details have emerged about what The Sun dubbed a "secret summit". The Sunday Times said it began at 8:00 pm (1900 GMT) and was ongoing at 11:00 pm, "in the hope of burying the hatchet and thrashing out a deal to govern together".

"We're all waiting for white smoke," an ally of one told the newspaper.

However, Sunak's announcement Sunday suggests he is confident he can vanquish Johnson.

But Mordaunt, who missed out on the last contest's run-off by just eight MPs' votes, is adamant she alone is able to bring the party together.

"I'm best placed to unite our party," the 49-year-old told the BBC, arguing she was "the halfway house" between Sunak and Truss in the summer race.

Johnson's apparent attempt at political resurrection has already been decried by opposition politicians, and even some in his own party.

"This isn't the time for Boris," Sunak-supporting Northern Ireland minister Steve Baker told Sky News, arguing another Johnson-led government "would be a guaranteed disaster" and implode within months.

"Voters out there love him and he's a wonderful man -- but he doesn't have that meticulous compliance with tedious rules," he added.

Sunak also picked up the key endorsement of trade minister Kemi Badenoch, an influential right-winger who finished fourth in the last leadership contest.

In a clear swipe at Johnson in The Sunday Times, she cautioned against "nostalgia for the cavalier elan of 2019" -- when he won an 80-seat majority -- and said the Conservative party "is not a vehicle for any one individual's personal ambitions".

New polling released Sunday showed the Tories could benefit from a change of leader, after Truss's missteps plunged them to unprecedented lows.

But a survey by Conservative pollster James Johnson still found all three Tory candidates had negative favourability, with Johnson on -24, Mordaunt -15 and Sunak -2.

The main Labour opposition, which has opened up huge poll leads, is demanding a general election.

"The country needs to get rid of this chaos," its leader Keir Starmer told the BBC.