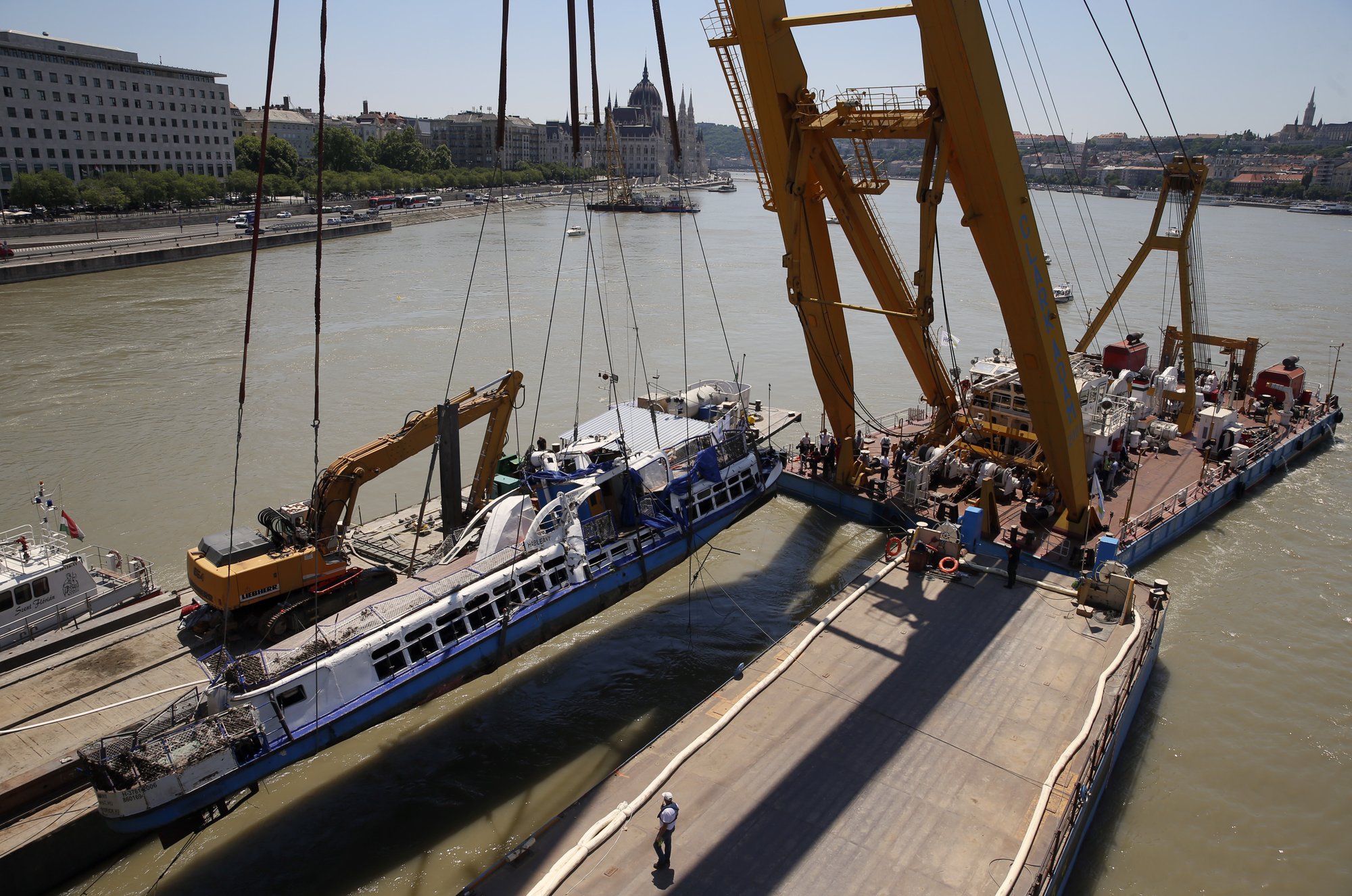 A crane lifts the sightseeing boat out of the Danube river in Budapest, Hungary, Tuesday, June 11, 2019. (Photo: AP)

Rescue crews raised a sunken tour boat out of the Danube River on Tuesday, shortly after four more bodies were recovered from the vessel involved in a collision with a river cruise ship nearly two weeks ago.

A huge floating crane placed the Hableany (Mermaid) on a barge at Margit Bridge, the site of the tragedy in the Hungarian capital.

Nineteen South Koreans and a Hungarian crewman have been confirmed dead, with eight people still listed as missing.

Police spokesman Kristof Gal said although it was not yet officially confirmed, the Hableany’s Hungarian captain and a young South Korean girl are believed to be among the four bodies taken off the boat after it was raised to the river surface.

Seven South Koreans were rescued after the nighttime collision May 29 amid heavy rain.

Gal said the tour boat would be taken on the barge to nearby Csepel Island, where it will be examined by Budapest police as part of their investigation of the crash.

He added that rescuers would also sift through the sediment deposited in the hull of the boat — which spent more than 12 full days underwater — in the search for more victims.

The search for the missing victims would continue along the Hungarian section of the Danube River south of Budapest, Gal said.

Efforts to search for the missing victims of the collision and to raise the Hableany have been hindered by the Danube’s high springtime water levels — which are expected to fall significantly over the coming days in Budapest — and the river’s fast flow, as well as near-zero visibility under water.

The captain of the other ship in the collision, the Viking Sigyn, has been under arrest since June 1, suspected of endangering water transport leading to a deadly mass accident.

The Viking Sigyn, which left Budapest less than 48 hours after the collision with the Hableany, is back in Hungary on a scheduled trip and docked at the town of Visegrad, north of Budapest. Police said they carried out another inspection on the ship on Monday, but said there were no plans to seize the cruise ship.