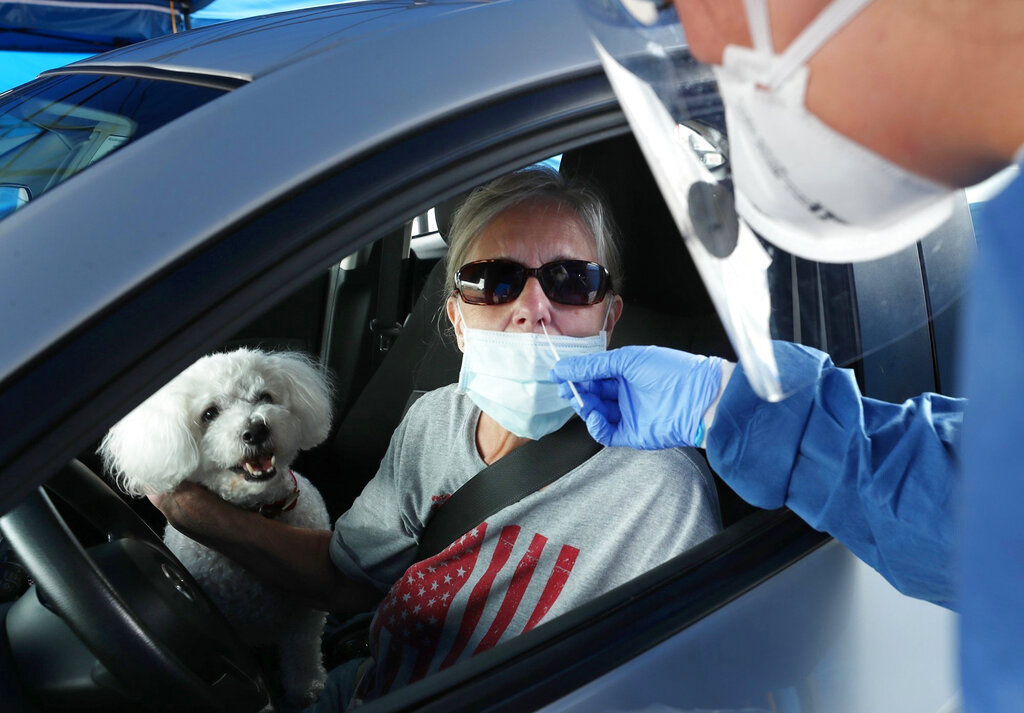 Louie looks on as Priscilla Metzeler gets tested by an Ohio National Guard Medic at a Summit County Department of Health COVID-19 testing site at Chapel Hill Mall on Saturday, Sept. 12, 2020, in Akron, Ohio. (Photo: AP)

Experts are warning that the U.S. is seeing a “rapid acceleration” of COVID-19 cases, as the country confirmed over 60,000 new cases on Tuesday, according to Johns Hopkins University tracking.

Cases have not reached this height since mid-summer, which saw numbers reach 67,200 on July 22.  Average daily cases have surged 70 percent since mid-September.

The U.S. has so far counted more than 8.3 million cases of the virus and over 220,000 deaths since the pandemic began in March.

At least 37 states have seen a rise in hospitalizations, with hospitals in rural parts of the country facing the brunt of the surge.

Reporting from The Atlantic’s COVID-19 Tracking Project found the seven-day average of new cases in Montana, North Dakota and South Dakota has more than doubled in the past month.

On Monday, a judge reimposed Wisconsin Gov. Tony Evers' capacity order- limiting the number of people who can gather in bars, restaurants and indoor venues to 25 percent of capacity. The state saw a surge of 3,777 new cases Monday and reported 19 deaths related to the virus.

Along with the surge in cases this fall, officials from the U.S. Centers for Disease Control and Prevention are alerting the public that the pandemic could be behind more deaths than the 220,000 officially reported.

CDC figures show nearly 300,000 more people have died this year than would die in a typical year, and while two-thirds of those are known to be the result of COVID-19, the CDC says the remaining "excess deaths" are likely tied, either directly or indirectly, to the coronavirus pandemic.

Among the agency's findings: An "excess death" rate increase of 26.5 percent among younger adults between the ages of 25 to 44 and a further confirmation that the coronavirus has taken a disproportional toll on Blacks and Latinos.