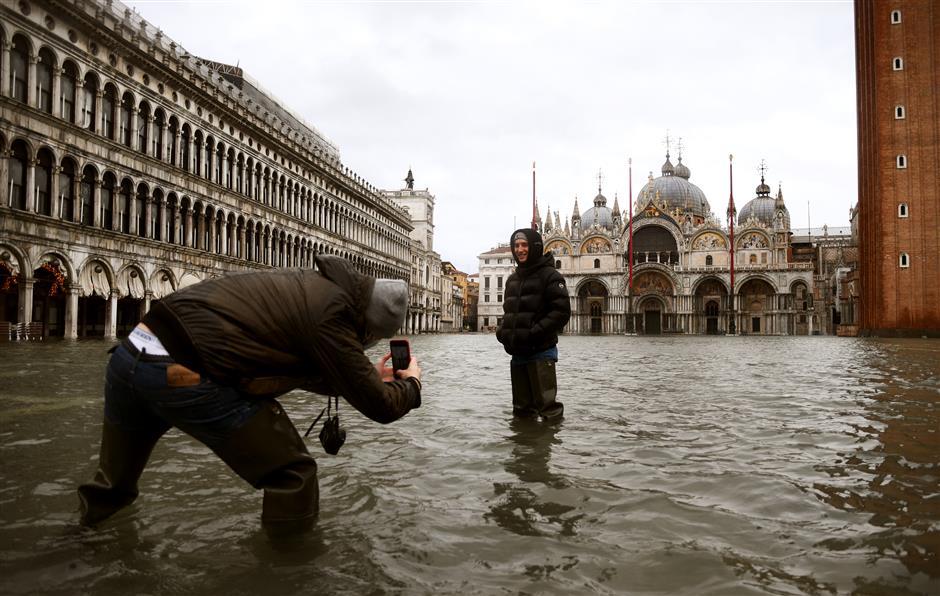 People take photos in the middle of a flooded St Mark’s Square in Venice on Tuesday.

High tides flooded St Mark’s Square in Venice on Tuesday, fanned by winds that were stronger than predicted, and an experimental system of inflatable barriers wasn’t activated to prevent water from invading the lagoon city.

The system, while still in an experimental phase, gets activated when high tides are predicted to reach at least 1.3 meters. Tuesday’s tide was predicted to reach 1.25 meters. Instead, it kept rising to 1.38 meters by late afternoon.

Some shops were flooded, and Venetians waded in water as they scrambled to set out raised walkways. Damage to shops and other business was destined to compound the suffering already sharply felt in Venice’s economy by tourism largely washed away by the coronavirus pandemic.

“Unfortunately, the weather is freer than us. It does what it wants,” Venice Mayor Luigi Brugnaro said ruefully, referring to the stronger-than-expected winds that whipped across the Adriatic from Croatia’s coastline.

In July, Venice successfully carried out a trial run of the ambitious anti-flood system, which consists of 78 barriers that can be inflated when needed to rise from the sea like a kind of dike-on-demand. The system is dubbed “Moses” after the biblical figure who parted the waters of the Red Sea.

Just over a year ago, Venice experienced its worst flooding in more than 50 years when the water reached 1.87 meters in the city.

The new moveable barrier system is designed to protect the city from tides as high as 3 meters.

Noting that the system was still in the experimental stage, the mayor said “more rapid protocols” to activate it were needed, in view of Tuesday’s flooding.