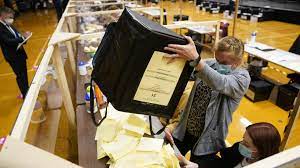 According to the results, among the first to be announced after the local and regional elections held on Thursday, Conservative candidate Jill Mortimer won 15,529 votes, almost double the number obtained by her Labour opponent Paul Williams with 8,589.

The strongly pro-Brexit constituency has never voted Conservative since its creation in 1974. The by-election was called alongside the local polls after its Labour incumbent quit over allegations of sexual harassment.