Those were the last words Tia Coleman recalls her sister-in-law yelling before the tourist boat they were on sank into a Missouri lake, killing 17 people, including nine of Coleman's family members. 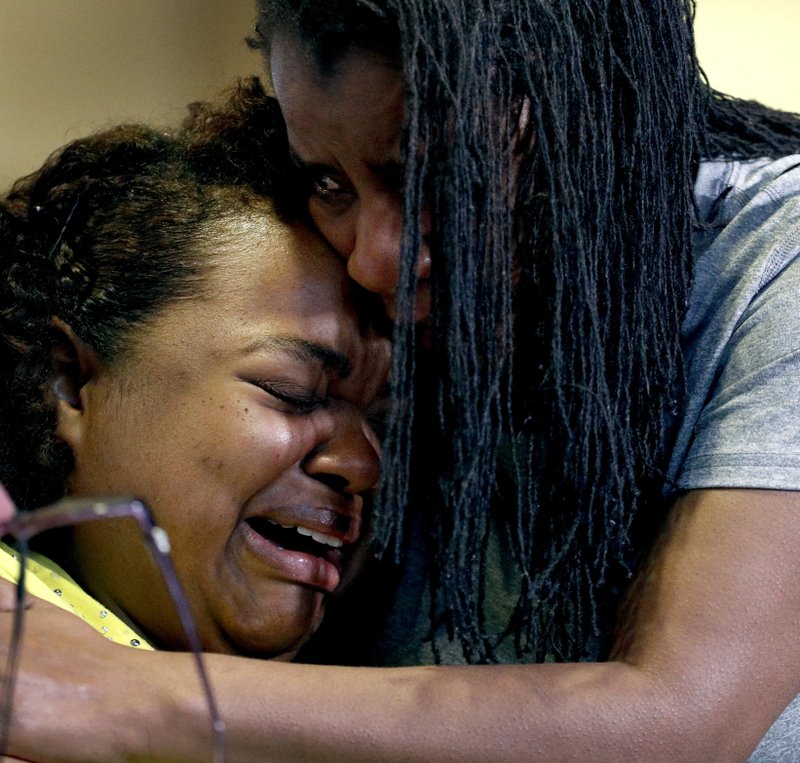 A huge wave hit, scattering passengers on the vessel known as a duck boat into Table Rock Lake near Branson, Coleman said. When the Indianapolis woman came up for air, she was alone. She prayed.

"I said, 'Lord, please, let me get to my babies," she told reporters from her wheelchair Saturday in the lobby of a hospital where she's recovering after swallowing lake water. "'... If they don't make it, Lord, take me too. I don't need to be here.'"

Coleman recalled spotting the rescue boat and managed to reach it, "somehow." Earlier, from her hospital bed, she recounted to television station KOLR her sister-in-law's last words.

Coleman's husband and three children, ages 9, 7 and 1; her 45-year-old sister-in-law and 2-year-old nephew; her mother-in-law and father-in-law and her husband's uncle all died Thursday night in the deadliest accident of its kind in nearly two decades.

Others killed included a Missouri couple who had just celebrated a birthday; another Missouri couple on what was planned as their last extended vacation; an Illinois woman who died while saving her granddaughter's life; an Arkansas father and son; and a retired pastor who was the boat's operator.

None of the 31 passengers on board was wearing a life jacket, according to an incident report released Saturday by the Missouri State Highway Patrol.

State and federal investigators were trying to determine what sent the vessel, originally built for military use in World War II, to its demise. An initial assessment blamed thunderstorms and winds that approached hurricane strength, but it wasn't clear why the amphibious vehicle even ventured into the water.

Suzanne Smagala with Ripley Entertainment, which owns Ride the Ducks in Branson, said it was the company's only accident in more than 40 years of operation. The company hasn't commented on Coleman's account of the tour, which usually begins with a tour of downtown Branson, known for its country shows and entertainment, before the vessel enters the lake for a short ride on the water.

Twenty-nine passengers and two crew members were aboard. Fourteen people survived, including two adults who remained hospitalized Saturday. Coleman and her 13-year-old nephew were the only of the 11 members of her family who boarded the boat to make it out alive.

Another survivor was 12-year-old Alicia Dennison, of Illinois, who says her grandmother, 64-year-old Leslie Dennison, saved her from drowning. Alicia's father, Todd Dennison, told the Kansas City Star that his daughter recalled feeling her grandmother below her, pushing her upward after the boat capsized.

Another young survivor was 14-year-old Loren Smith of Osceola, Arkansas. She suffered a concussion, but her father, 53-year-old retired math teacher Steve Smith, and her 15-year-old brother, Lance, died.

Others killed included 65-year-old William Bright and his 63-year-old wife, Janice. The couple had recently celebrated their 45th wedding anniversary and had talked about Branson being one of their last big trips, recalled neighbor Barbara Beck.

The couple moved to Higginsville from Kansas City, Missouri, three years earlier to be closer to a daughter and grandchildren and quickly embraced small-town life.

William Bright's final public Facebook posting noted the wedding anniversary and how happy he was with his wife, three kids and 16 grandchildren. Life, he wrote, had "been a lot of fun."

Another Missouri couple killed in the accident were 69-year-old William Asher and 68-year-old Rosemarie Hamann. The St. Louis-area couple had been celebrating Hamman's birthday earlier in the week. In a final Facebook photo posted by Hamann, he's sticking his tongue out and she's smiling.

"I can only imagine what they were going through. They were so in love. It's just heartbreaking," said friend Russ McKay, who said talked to Hamann the day before the accident.

McCay says Hamann told him the couple had just gone on a paddle boat and were planning to go again. He doesn't know why they chose the duck boat instead.

Chance also brought the Colemans aboard the doomed vessel.

Tia Coleman said her family initially lined up for the wrong tour so they had to switch out their tickets for the 6:30 p.m. ride.

She says the crew showed passengers where the life jackets were but said they wouldn't need them.

The company's website had been taken down by Saturday, save for a statement that its operations would remain shuttered to support the investigation and allow time for families and the community to grieve.

Investigators with the National Transportation Safety Board and U.S. Coast Guard were hoping a video recorder recovered from the boat would help provide some explanation on why it sank. NTSB member Earl Weener winds were 2 mph short of hurricane force at the time.

While the boat's driver on water, 51-year-old Kenneth McKee, survived; its driver on land, 73-year-old Bob Williams, did not.

Branson Mayor Karen Best said Williams was a "great ambassador" for the city. Williams' family in Rhode Island, where he'd lived for decades before retiring to Branson, remembered him as a deeply religious man who founded a local church.

"Pastor Bob was a prince of a man, loving, kind, and generous, whose loss to our family is incalculable," said Williams' son-in-law, Bishop Jeffery Williams, who now leads King's Cathedral in Providence.

Cover image: People pray around a van believed to belong to victims of a duck boat accident in the parking lot of the business running the boat tours Friday, July 20, 2018 in Branson, Mo. The country-and-western tourist town of Branson, Missouri, mourned Friday for more than a dozen sightseers who were killed when a duck boat capsized and sank in stormy weather in the deadliest such accident in almost two decades.