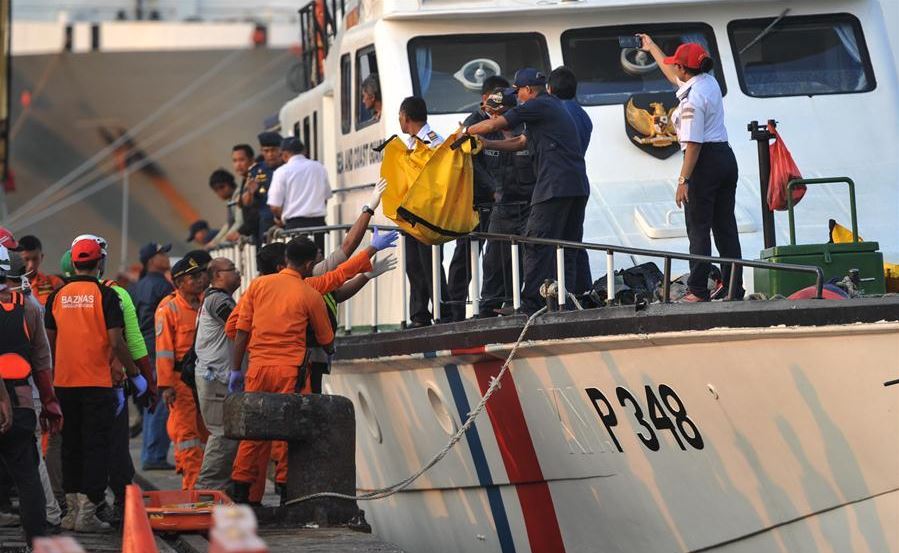 JAKARTA, Oct. 30 (Xinhua) -- Relatives and friends of those onboard Lion Air flight JT 610 were keeping their fingers crossed for a miracle after the aircraft crashed into the sea off Karawang in Indonesia's West Java province Monday morning.

The plane en route to the city of Pangkal Pinang with 189 people onboard was reported missing at around 6:30 a.m. local time (2330 GMT Sunday), and was believed to have crashed 13 minutes after taking off from Jakarta's Soekarno-Hatta international airport.

Relatives and friends gathered Monday night at a hospital's Disaster Victim Identification (DVI) section in East Jakarta, watching TV in desperate hope for any updates of their loved ones. Some were sobbing while some were being consoled by others.

Thirty-year-old Indra Wicaksana, an employee of Indian telecom firm Telkomsel, was preparing ante-mortem registration documents for his colleague Tami Julian, who was listed among the victims.

He never thought he would lose his good friend in such a sudden and tragic way after their last chat on Friday.

"He (Tami Julian) flew to Jakarta to take part in the Jakarta Marathon event on Sunday morning and (planned to) go back to work in Pangkal Pinang on Monday morning," Indra told Xinhua.

Indra recalled the moment when he had to tell Tami's parents the heartbreaking news.

"They did not say anything but I heard sobbing from a refrained cry on the phone," Indra said.

Tami's parents were on their way to Jakarta in the hopes of seeing their son for the last time.

As of Tuesday morning, rescuers have retrieved 24 bags of body parts from waters near the crash site, and the chance of finding any survivors is decreasing day by day.

Some debris were also retrieved from the sea about 35 meters deep off Karawang's Tanjung Pakis beach in West Java province, but the fuselage of the plane and the two black boxes -- Flight Data Recorders and Cockpit Voice Recorders -- have yet to be found.

"My projection is there is no survivor. Because the conditions of the bodies of the victims already found were not intact anymore. And this has been several hours after the incident. It is very likely that all the 189 people have been killed," Indonesia's National Search and Rescue Agency (Basarnas) Operational Director Bambang Suryo Aji told a press conference on Monday.

Rescuers resumed their search on Tuesday morning after it was suspended Monday night due to bad weather and low visibility. The search operation will last for seven to ten days.

Meanwhile, head of Basarnas Muhammad Syaugi said the search operation encountered difficulties due to the absence of the Emergency Locator Transmitter (ELT), which is supposed to be installed in aircraft.

The ELT would automatically emit radio signals when the aircraft encounters an emergency.

"One thing is for sure, the plane's ELT did not emit distress signals ... (therefore) Basarnas' Earth Orbital Local User Terminal could not detect the whereabouts of the crashed plane," Syaugi said on Monday.

CAUSE OF CRASH UNKNOWN

Investigations were underway to find out why the only two-month-old Boeing 737 Max 8, the latest and most advanced version of the best-selling 737 model, plunged into the sea shortly after taking off in fine weather.

The single-aisle, twin-engine passenger jet was manufactured this year and was put into operation in mid-August, according to the low-cost airline.

The new model has a bigger body than other 737 planes, and is said to be equipped with more advanced engines and other advanced equipment.

Lion Air ordered as many as 218 units of the Boeing 737 Max 8 for its fleet, making it the first in Indonesia to operate the plane, which made its factory maiden flight in 2017.

Initial information indicated that the aircraft disintegrated due to its severe impact with the sea surface after it dived from the sky at a rapid speed, allegedly from about 900 meters, according to Basarnas's Operation Director.

He ruled out the possibility that the plane had exploded in the sky, as the debris showed no signs of being burnt and body parts were found floating around the crash site.

On a separate occasion, head of Indonesian Transportation Safety Committee Soerjanto Tjahjono said the plane had accelerated to 340 knots (630 km per hour) before plunging into the sea.

Speaking at the Soekarno-Hatta airport, Soerjanto added that such a speed was too fast for a plane in its category. It was unknown whether the captain intentionally increased the speed or not.

He said the Indian pilot had asked for a Return To Base (RTB) procedure to the airport two minutes after taking off, at a height of 518 meters.

Meanwhile, media reports said the plane had experienced a "technical problem" on its last flight from Bali to Jakarta on Sunday, but Lion Air's chief executive Edward Sirait said the problem had been resolved according to procedure.

"There was a report on technical issue indeed. The checking was referred to maintenance procedure made by the plane factory," he said on Monday.

The plane's captain Bhavye Suneja was a Delhi resident who got his pilot license in 2009 and joined the low-cost airline in March 2011.

Lion Air spokesperson Danang Mandala Prihantoro said in a statement that the captain was a seasoned one with 6,000 flying hours, while his co-pilot had 5,000 flying hours.

The Indian Embassy in Indonesia said Suneja was killed in the crash.

Air travel is one of the key means of transportation in Indonesia, an archipelagic nation home to over 17,500 islands.

Monday's crash is the worst air disaster in Indonesia since an Airbus 320 operated by AirAsia plunged into the sea in December 2014, killing 162 people onboard.

Meanwhile, China expressed its deep sympathy to the bereaved families of the victims of the crash, Chinese Foreign Ministry spokesperson Lu Kang said at a press briefing on Monday.

The Chinese side has not been informed so far that any Chinese nationals were aboard the plane, Lu said.