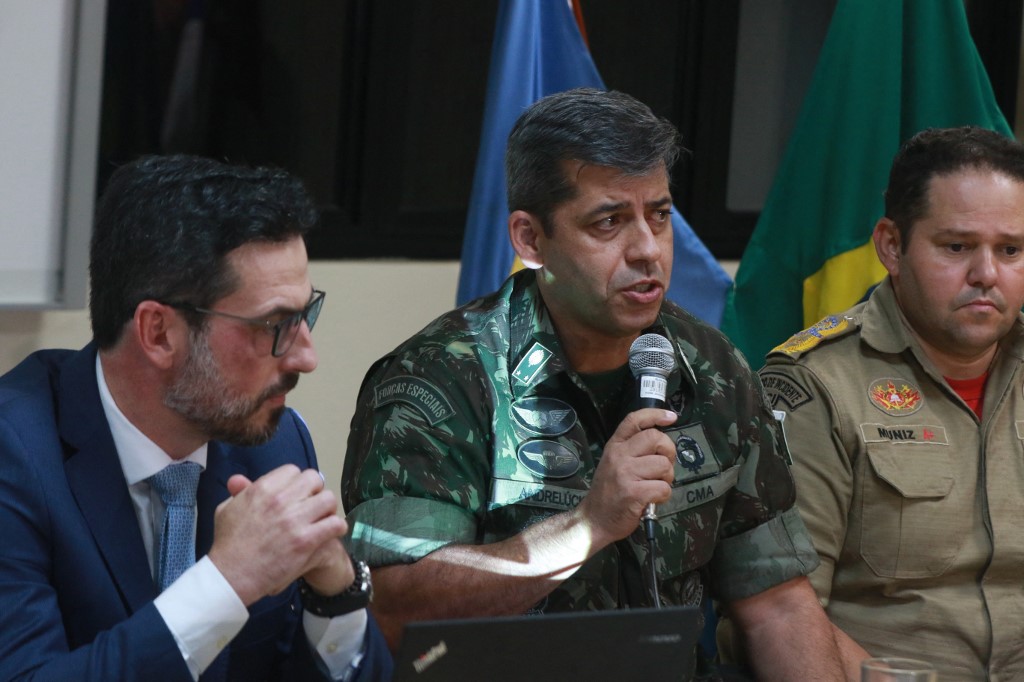 Handout photo released by the Amazonas Federal Police of the chief of the Centre of Coordination of Operations of the Amazon Military Command (CMA), Claudio Henrique da Silva Placido (C), speaking during a press conference in Manaus, Amazonas state, Brazil on June 15, 2022, on the disappearance of british journalist Dom Phillips and Brazilian indigenous expert Bruno Pereira. (Photo: AFP)

One of two men arrested over the disappearance of a British journalist and an Indigenous expert in the Brazilian Amazon confessed to having buried the pair in the jungle, federal police said Wednesday after human remains were found.

Dom Phillips and his guide Bruno Pereira went missing June 5 in a remote part of the Amazon that is rife with environmental crimes including illegal mining, fishing and logging, as well as drug trafficking.

Police did not specify whether the suspect, Amarildo da Costa de Oliveira, also confessed to killing the pair, saying only that he admitted to having participated in the episode and "recounted in detail the crime that was committed and indicated the place where he buried the bodies."

The location where the remains were found was "very difficult to reach," the police officer said in Manaus, the largest city in the Amazon.

"Excavations have been carried out on site. The excavations will continue, but human remains have already been found.

"As soon as we have been able to verify with the help of expertise that it is indeed the remains of Dom Phillips and Bruno Pereira, they will be returned to the families."

Earlier in the day, Oliveira was taken by police to the search site along the Itaquai River, media reports said.

Phillips' Brazilian wife, Alessandra Sampaio, in a statement Wednesday thanked "all the teams that carried out the search, especially the Indigenous volunteers," whose absence from the press conference was criticized by some observers.

"Although we are still awaiting final confirmation, this tragic finale puts an end to the anguish of not knowing where Dom and Bruno were," she said.

"Today we also begin our fight for justice... we will only have peace when the necessary measures are taken to ensure that such tragedies do not happen again."

The other suspect, a man reported to be Oliveira's brother, Oseney da Costa Oliveira, was arrested Tuesday in Atalaia do Norte -- the city Phillips and Pereira were returning to when they disappeared in the Javari Valley after receiving threats during a trip.

Police are also investigating the possible role of a third person, Fontes said.

Amarildo, a fisherman, was arrested on June 7. Both he and Oseney are 41 years old.

Phillips, 57, a long-time contributor to Britain's The Guardian and other leading international newspapers, was working on a book on sustainable development in the Amazon.

Pereira, 41, a highly regarded advocate for the region's Indigenous peoples, was acting as his guide while on leave from his job with the Brazilian government's Indigenous affairs agency, or FUNAI.

The father of three had repeatedly reported being threatened by loggers, miners and illegal fishermen who tried to encroach on protected lands.

The two men's disappearance sparked global outrage, drawing reaction from high-profile political figures as well as celebrities such as members of Irish rock band U2.