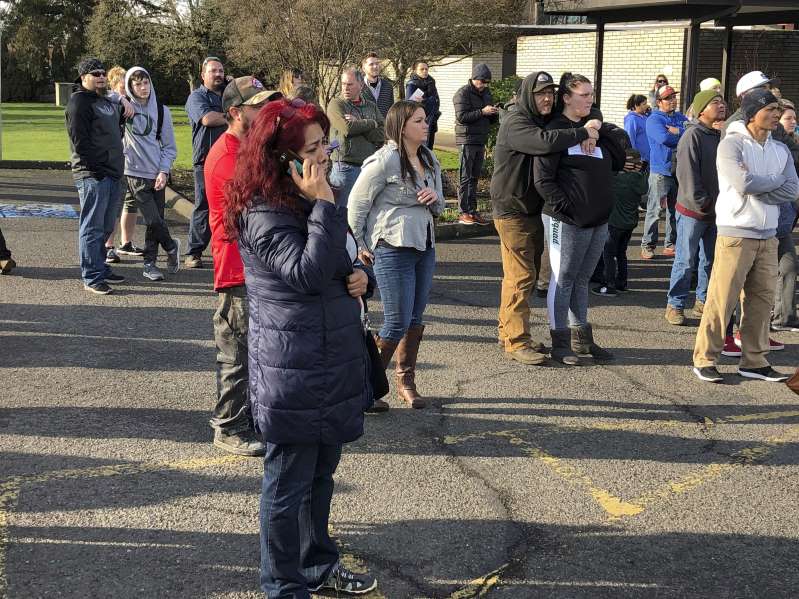 Parents of students at Cascade Middle School wait to be reunited with their children in Eugene, Ore., Friday, Jan. 11, 2019. (Photo: AP)

A suspect was shot Friday at an Oregon middle school, but no students or teachers were hurt, police said.

Students were locked in classrooms, and no one was being allowed into the building during the lockdown, Eugene police Lt. Jennifer Bills told reporters at Cascade Middle School in Eugene, south of Portland. She said she didn't know the suspect's condition.

"No students were harmed whatsoever. All the students are safe," she said.

Bills said the incident began with a dispute outside the school. It wasn't clear who was involved, and no further details were released.

The Bethel School District released a brief statement calling it an officer-involved shooting but did not elaborate.

Police asked parents to stay away from the school during the investigation.

The district said students would be released at 3 p.m. through the school's side exits and should be picked up at nearby St. Mark's Catholic Church.

More than 20 years ago, then 15-year-old Kip Kinkel killed his parents before fatally shooting two students and wounding 26 others at Thurston High School in nearby Springfield.

The incident was among the first school shootings to seize the national spotlight. Kinkel remains in prison.