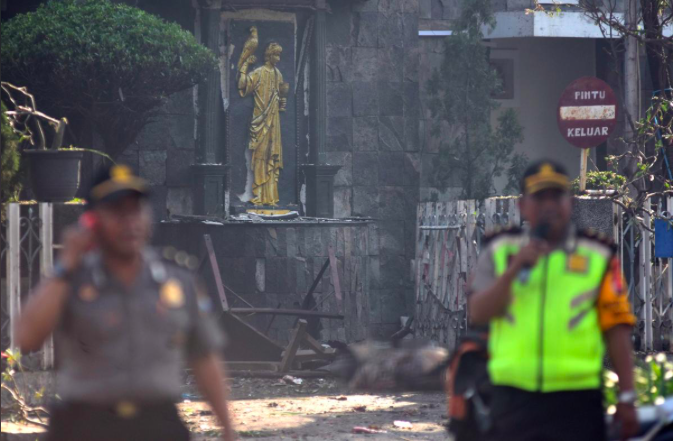 Police are seen outside the Immaculate Santa Maria Catholic Church following a blast, in Surabaya, East Java, Indonesia May 13, 2018 in this photo taken by Antara Foto. Antara Foto/M Risyal Hidayat / via REUTERS

Indonesia, the world’s largest Muslim-majority country, has seen a recent resurgence in homegrown militancy inspired in part by Islamic State.

“There is one location where we can’t enter yet,” Mangera told reporters near the scene of one of the bombings.

Television footage showed one church where the yard in front appeared engulfed in fire, with thick, black smoke billowing up. A large blast was heard hours after the attacks, which Mangera said was a bomb disposal squad “securing” a remaining device.

There was no immediate claim of responsibility for the attacks. 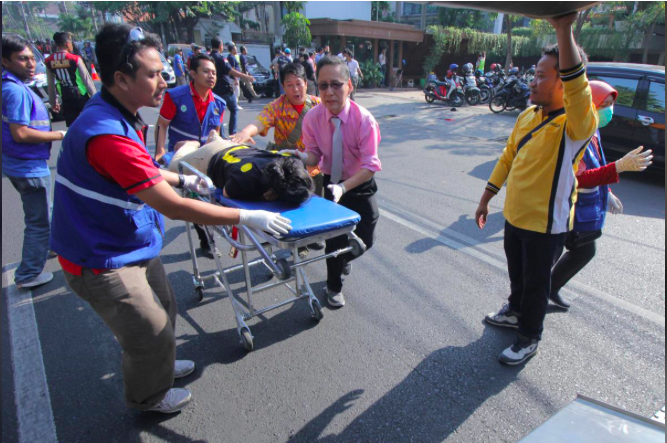 A person injured from a blast at the Indonesian Christian Church is evacuated to a waiting ambulance in Surabaya, East Java, Indonesia May 13, 2018 in this photo taken by Antara Foto. Antara Foto/Didik Suhartono/ via REUTERS

JAD is an umbrella organization on a U.S. State Department “terrorist” list that is estimated to have drawn hundreds of Islamic State sympathizers in Indonesia.

The attacks come days after militant Islamist prisoners killed five members of an elite counter-terrorism force during a 36-hour standoff at a high security jail on the outskirts of the capital, Jakarta.

The church attacks were likely linked to the prison hostage standoff, Purwanto said.

“The main target is still security authorities, but we can say that there are alternative (targets) if the main targets are blocked,” he said. 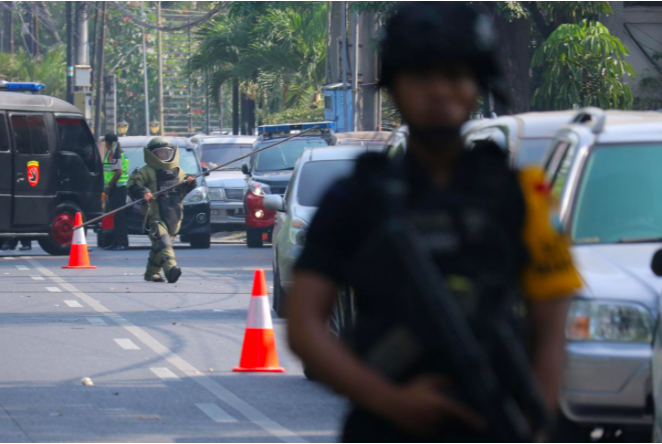 Police search the area at the Indonesian Christian church following a blast in Surabaya, East Java, Indonesia, May 13, 2018 (Photo: Reuters)

At St Mary’s catholic church, one of the places of worship attacked, the bombing happened after an earlier mass was over and when the church was getting ready to hold another service.

Inspector general Machfud Arifin told CNN Indonesia that the suicide attacks were carried out using a motorbike at St Mary’s church and a car at another.

Earlier, media reports said a woman with a younger child and a teenager had just entered one church and was being questioned by security when the bomb exploded.

Television images showed toppled and burnt motorcycles and debris scattered around the entrance of one church and police cordoning off areas as crowds gathered.

Nearly 90 percent of Indonesians are Muslim, but the country is also home to sizeable communities of Hindus, Christians, Buddhists, and people who adhere to traditional beliefs.

Indonesia has had some major successes tackling militancy inspired by al Qaeda’s attacks on the United States in 2001. But there has been a resurgence of Islamist activity in recent years, some of it linked to the rise of Islamic State.

The most serious incident was in January 2016 when four suicide bombers and gunmen attacked a shopping area in central Jakarta.

Churches have also been targeted previously, including near-simultaneous attacks on churches there at Christmas in 2000 that killed about 20 people.

Police ordered the temporary closure of all churches in Surabaya on Sunday, and a large food festival in the city was cancelled.