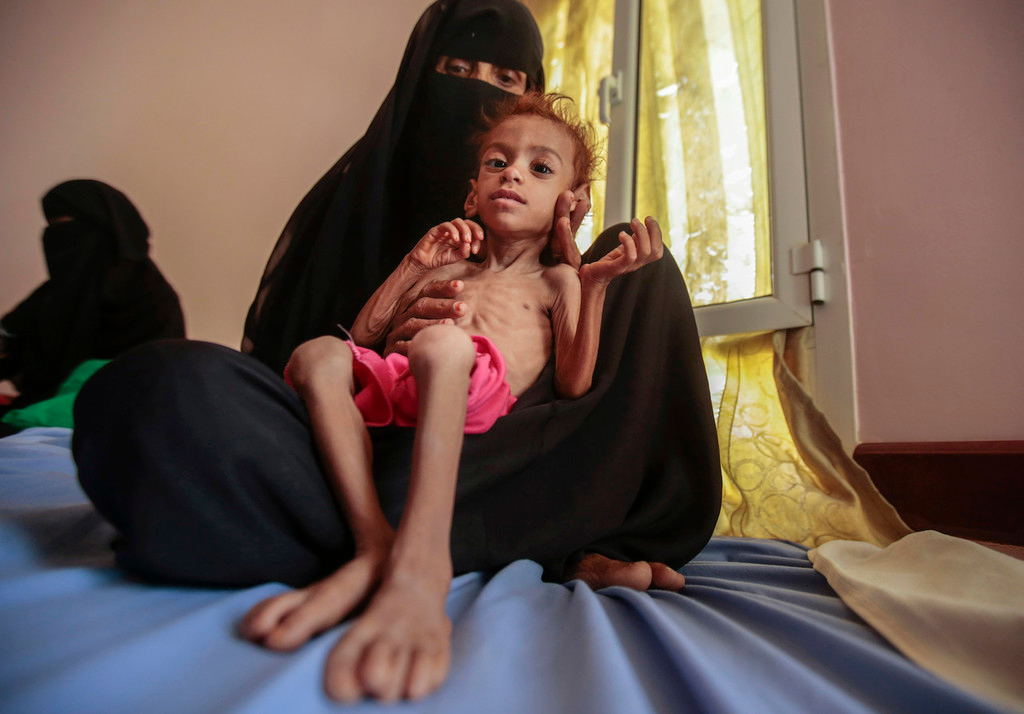 ADEN, Yemen -- The UN World Food Program (WFP) has begun to partially suspend food assistance operations to areas of war-torn Yemen under the control of Houthi rebels, putting thousands of hungry people at risk of starvation.

The UN agency, which is feeding more than 10 million people across Yemen, repeatedly complained of some "obstructive and uncooperative" Houthi leaders who interfered with food distribution in the country's northern areas.

During the past days, a war of words continued to escalate between the Yemeni Houthi rebels and WFP, leading to the recent partial suspension of aid distribution that deprived thousands of hungry Yemenis from food assistance.

The Houthi armed group aligned with Iran has controlled the capital Sanaa and most of Yemen's densely populated northern provinces since 2015.

Estimations indicate that the partial suspension of food assistance by the WFP will leave a serious impact on around 850,000 people in the Houthi-controlled northern areas.

Even in the government-controlled southern provinces, thousands of internally displaced may get affected by the recent partial suspension of aid distribution as the main WFP headquarters are still based in capital Sanaa.

Displaced families on the outskirts of Aden said that lack of food hit their camps a few days following the partial suspension of aid distribution amid complete absence of local organizations affiliated with the WFP in Yemen.

Yahya Hassan, an internally displaced father of five children, told Xinhua that humanitarian affairs and issues related to the lives of people should be kept away from the political conflicts happening in the country.

"We are the victims and now our camps are empty of food, medicine, children necessities, and even the elders are now deprived of assistance," said Yahya.

He urged the local and international organizations operating in the war-ravaged Arab country to continue supporting the hungry Yemenis regardless of their political affiliations or geographical location.

Most of the displaced families confirmed that they are still in a pressing need for support of the WFP and other organizations as their suffering continues in aggravation with no end in sight.

"My family are still needing many things including food, tents and medical care from the organizations," said an elderly displaced woman named as Kahala Mariam.

As the war continues in escalation in different parts of the country, thousands of people are pushed into refugee camps with no adequate assistance particularly in the daily basic needs such as drinking and eating.

Some people feared that the ongoing disagreements between the Houthi authorities based in Sanaa and the WFP officials may exacerbate their already miserable living conditions across the country.

Yusuf bin Ahmed, another displaced citizen, said that he used to receive some food assistance distributed by different organizations during the past six months but during these days nothing was distributed.

"Regarding the food assistance, our tent is empty and does not have even one flour sack or sugar basket. Nothing for eating or drinking is available now," said Yusuf.

"We urge the WFP to continue operations across Yemen because millions of hungry people largely depend on food assistance, please don't leave us alone," he added.

UN spokesman for the Secretary-General Stephen Dujarric said that the partial suspension decision was "taken as a last resort" after negotiations between the Houthis authorities and the WFP officials to stop the violations and diversion of food had stalled.

On Monday, David Beasley, head of the WFP in Yemen, lashed out at the Houthi rebels in Yemen's northern provinces for misappropriating aid supplies.

The WFP's head told the United Nations Security Council, that "the humanitarian situation in Yemen is dire. And despite the immense suffering of the 20 million Yemenis who do not have enough to eat, we continue to face fierce resistance to simply just do our job to keep people alive."

On the other side, the Iranian-backed Houthis accused the WFP of "providing Yemenis with rotten and expired food assistance."

However, the WFP strongly denied on Wednesday the Houthi claims on rotten foods delivered in Yemen, saying that it has a strong mechanism for controlling the food quality and it would not deliver aid not meeting the highest standards of food security.

On Thursday, Yemen's Prime Minister Maeen Abdulmalik said that his government does not prefer suspension of aid distribution, but urged the international community to exert more pressure on the Houthi rebels to stop diverting food assistance provided by the UN to the hungry people.

Yemen has been locked in a civil war since the Houthi rebels overran much of the country militarily and seized all northern provinces, including Sanaa, in 2014.

Saudi Arabia is leading an Arab military coalition that has intervened in Yemen's conflict since 2015 to support the government of President Abd-Rabbu Mansour Hadi after Houthi rebels forced him into exile.

The prolonged military conflict has aggravated the suffering of Yemenis and deepened the world's worst humanitarian crisis.