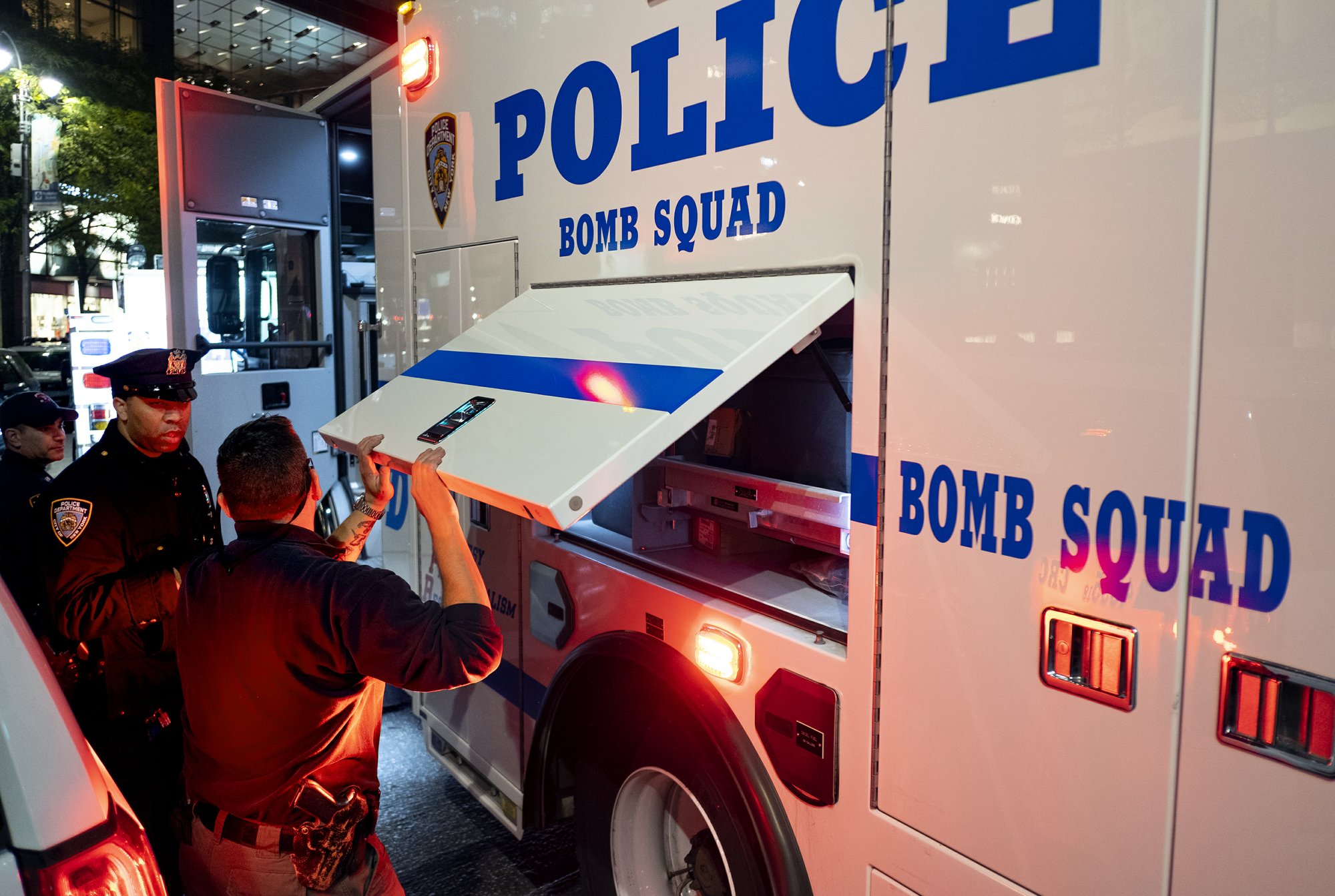 New York City police officer clear the scene after a report of a possible suspicious package was called in at the Time Warner Center Oct. 25, 2018. (Photo: AP)

Suspicious packages addressed to New Jersey Sen. Cory Booker and former National Intelligence Director James Clapper — and similar in appearance to pipe bomb devices sent to other prominent Democrats — have been intercepted, the FBI said Friday, as investigators scrambled from coast to coast to locate the culprit and motives behind a bizarre plot aimed at critics of President Donald Trump.

The FBI said the package to Booker was intercepted in Florida. The one discovered at a Manhattan postal facility was addressed to Clapper c/o CNN. An earlier package had been sent to former Obama CIA Director John Brennan in care of CNN in New York.

The FBI said the package to Booker was intercepted in Florida. The one discovered at a Manhattan postal facility was addressed to Clapper c/o CNN. An earlier package had been sent to former Obama CIA Director John Brennan in care of CNN in New York. 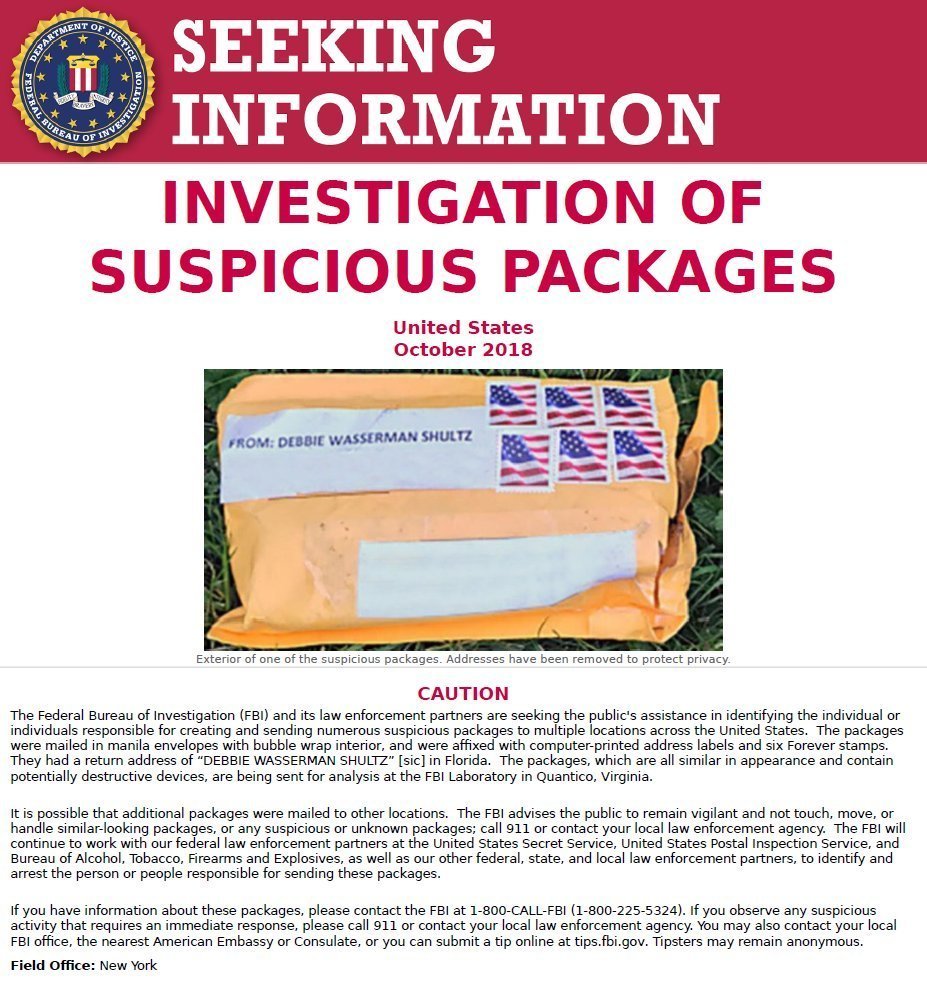 FBI released this poster on Oct.25, 2018, asking for the public's assistance in finding the people responsible for sending suspicious package to multiple locations across the United States.

Law enforcement officials told The Associated Press that the devices, containing timers and batteries, were not rigged like booby-trapped package bombs that would explode upon opening. But they were uncertain whether the devices were poorly designed or never intended to cause physical harm. A search of a postal database suggested at least some may have been mailed from Florida, one official said. Investigators are homing in on a postal facility in Opa-locka, Florida, where they believe some of the packages originated, another official said.

The officials spoke on condition of anonymity because they were not authorized to discuss the ongoing investigation by name.

Homeland Security Secretary Kirstjen Nielsen, in an interview Thursday night with Fox News Channel, acknowledged that some of packages originated in Florida.

New details about the devices came as the four-day mail bomb scare spread nationwide, drawing investigators from dozens of federal, state and local agencies in the effort to identify one or more perpetrators.

The targets have included Obama, Hillary Clinton, CNN and Rep. Maxine Waters of California. The common thread among them was obvious: their critical words for Trump and his frequent, harsher criticism in return.

Trump claimed on Friday he was being blamed for the mail bombs addressed to his critics, complaining in a tweet sent before dawn: “Funny how lowly rated CNN, and others, can criticize me at will, even blaming me for the current spate of Bombs and ridiculously comparing this to September 11th and the Oklahoma City bombing, yet when I criticize them they go wild and scream, ‘it’s just not Presidential!’”

At a press conference Thursday, officials in New York would not discuss possible motives or details on how the packages found their way into the US postal system. Nor would they say why none of the packages had detonated, but they stressed they were still treating them as “live devices.”

“As far as a hoax device, we’re not treating it that way,” police Commissioner James O’Neill said.

Details suggested a pattern — that the items were packaged in manila envelopes, addressed to prominent Trump critics and carried US postage stamps. The devices were being examined by technicians at the FBI’s forensic lab in Quantico, Virginia.

The packages stoked nationwide tensions and fears as voters prepared to vote Nov. 6 to determine partisan control of Congress — a campaign both major political parties have described in near-apocalyptic terms. Even with the sender still unknown, politicians from both parties used the threats to decry a toxic political climate and lay blame.

“A very big part of the Anger we see today in our society is caused by the purposely false and inaccurate reporting of the Mainstream Media that I refer to as Fake News,” Trump said on Twitter. “It has gotten so bad and hateful that it is beyond description. Mainstream Media must clean up its act, FAST!”

Former CIA Director Brennan, the target of a package sent to CNN, fired back.

“Stop blaming others. Look in the mirror,” Brennan tweeted. “Your inflammatory rhetoric, insults, lies, & encouragement of physical violence are disgraceful. Clean up your act....try to act Presidential.”

The list of bombing targets spread from New York, Delaware and Washington, D.C., to Florida and California.

The explosive devices were packed in envelopes with bubble-wrap interiors bearing six American flag stamps and the return address of Florida Rep. Debbie Wasserman Schultz, the former chairwoman of the Democratic National Committee.

The bombs seized Wednesday were about 6 inches (15 centimeters) long and packed with powder and broken glass, according to a law enforcement official who viewed X-ray images. The official said the devices were made from PVC pipe and covered with black tape. At the New York briefing, authorities confirmed that at least some of the packages were distributed through the US mail, and cautioned that there could be additional devices in the postal system. They said investigators searching for more suspicious parcels had not found any during the previous eight hours.

The tape on the pipe is “an investigator’s dream,” he said, recalling a case in Texas that was solved because the fibers on the tape were traced to the bomber’s dog. He said bombers tend to plot methodically.

“This is someone sitting down and spending time thinking about what they’re going to do to someone else. And some people like to relish that,” he said.

The new packages discovered Thursday set off a new wave of alarm.

The packages addressed to Biden were intercepted at Delaware mail facilities in New Castle and Wilmington, according to a law enforcement official who, like others, wasn’t authorized to discuss the investigation and spoke on condition of anonymity.

Like earlier targets, both Biden and De Niro have been sharply critical of Trump. The actor dropped an expletive insult at Trump at this year’s Tony Awards and apologized to Canadians for the “idiotic behavior of my president.” Biden said last week that the president may not “know what he’s doing” and coddles dictators.

On Thursday, during a campaign trip to suburban Buffalo, Biden said: “We’ve got to get off this hate machine. We’ve got to come together.”

The packages were “clearly an effort to terrorize people politically, to choose people for political purposes and attack them because of their beliefs,” New York Mayor Bill de Blasio said.

The first crude bomb to be discovered was delivered Monday to the suburban New York compound of George Soros, a liberal billionaire and major contributor to Democratic causes. Soros has called Trump’s presidency “dangerous.”

Similar packages addressed to Clinton and Obama were intercepted on their way to Clinton’s New York home, where she lives with former President Bill Clinton, and to Washington, where Obama lives with his wife, Michelle Obama. The Secret Service said neither package reached its intended recipient.

Other packages were sent to frequent Trump critics Waters, D-Calif., and former Obama Attorney General Eric Holder. His ended up at the Sunrise, Florida, office of Wasserman Schultz, who was listed as the return address.

A police bomb squad removed the package addressed to Brennan on Wednesday from CNN’s New York office, which was evacuated.

In response to the events, Trump decried political violence but also joked about moving to more polite speeches.

“Let’s get along,” he said at a Wisconsin rally Wednesday night. “By the way, do you see how nice I’m behaving tonight? Have you ever seen this?”