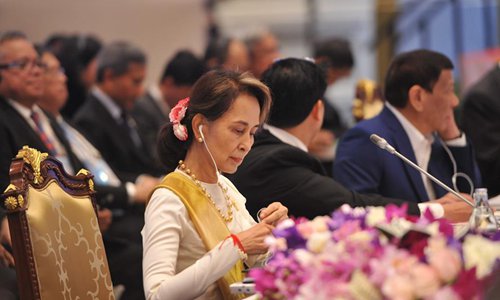 Both Myanmar's military and its civilian government are behind the decision for Nobel Laureate Aung San Suu Kyi to defend her country against allegations of genocide at the UN's top court, an army spokesman said on Thursday.

In a shock move, State Counsellor Suu Kyi's office announced on Wednesday she would travel to the International Court of Justice (ICJ) in The Hague, the Netherlands to lead the defense team.

West African nation Gambia is due to open its case at the ICJ in December on behalf of the 57 member states of the Organization of Islamic Cooperation.

The mainly Muslim nation accuses Myanmar of breaching the 1948 Genocide Convention through its military crackdown in 2017 against its Rohingya Muslim community in Rakhine state.

"We're cooperating in this case and our legal experts are working together," Myanmar's military spokesman Brigadier General Zaw Min Tun said, referring to the armed forces and civilian government.

He also confirmed Suu Kyi would soon meet powerful army chief Min Aung Hlaing, with whom she has long had strained ties.

Some 740,000 Rohingya fled over the border into Bangladeshi camps as the military swept through northern Rakhine state.