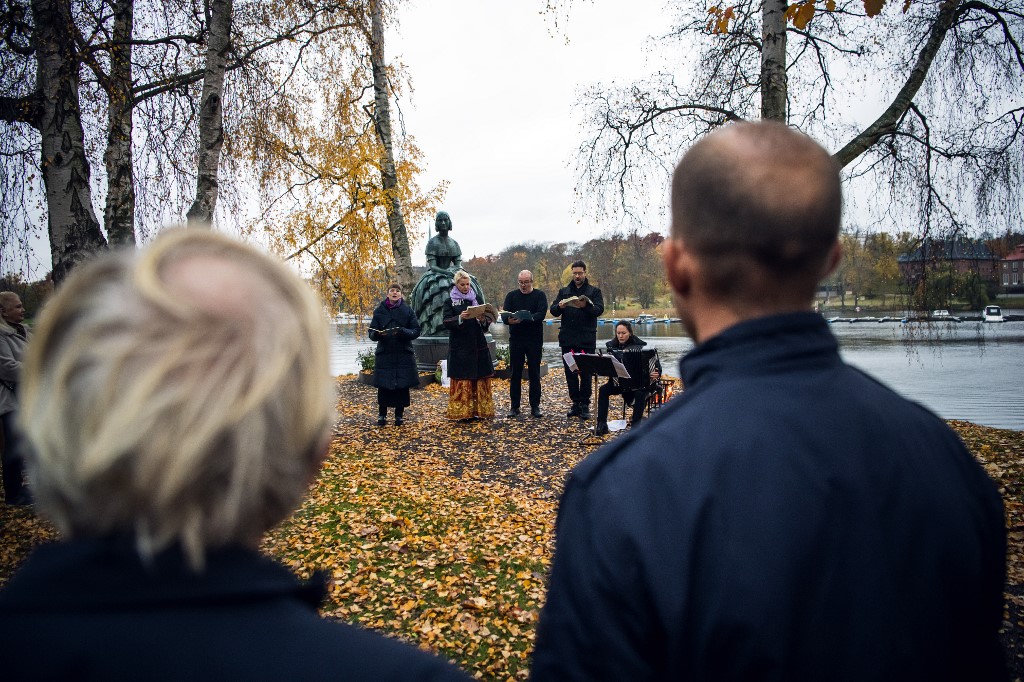 A group of Swedish Opera singers perform the Mozarts Requiem in open air next to Jenny Lind's statue, located in Djurgarden park in Stockholm on October 31, 2020, during the novel coronavirus COVID-19 pandemic. (Photo: AFP)

STOCKHOLM, Nov. 16 (Xinhua) --- Sweden has cut its limit on attendance at public gatherings to eight people, a move widely interpreted as a U-turn on the country's light-touch approach to fight the COVID-19 pandemic.

The decision to restrict severely the number of people allowed to gather at public events in Sweden is "unparalleled in modern times," Prime Minister Stefan Lofven told a digital news conference on Monday, just a month after his government had raised the attendance limit from 50 to 300 at some sporting and cultural events.

The growing infection rate and added pressure on the national health care system have led the government to start introducing outright bans rather than just issuing recommendations, which the Swedish strategy has been largely based on so far.

The government hopes that the new rules will send a clear signal to the public and create a new norm for social life in general, even if the eight-person limit does not apply to private parties or events.

"Do your duty. Do not go to the gym; do not go to the library; do not have parties. Cancel everything. Do not come up with excuses for why your particular activity is OK," said the prime minister.

Monday's announcement followed a restriction on restaurants to seat a maximum of eight diners per table. In addition, the government announced last week that bars and restaurants would not be allowed to serve alcohol after 10 p.m. from Nov. 20 until the end of February.

While the government has stopped short of announcing a full lockdown, Interior Minister Mikael Damberg also told the news conference that the new limit on gatherings would be in place for at least four weeks, but could be extended to run over the Christmas and New Year holidays.

Education Minister Anna Ekstrom has also said that the government is prepared to close schools should it be necessary. In spring, Sweden kept all schools open, moving just high schools and universities to remote learning before opening them up again after the summer holidays.

According to the latest figures from Sweden's Public Health Agency published Friday, there had been 177,355 confirmed COVID-19 cases and 6,164 deaths in Sweden.