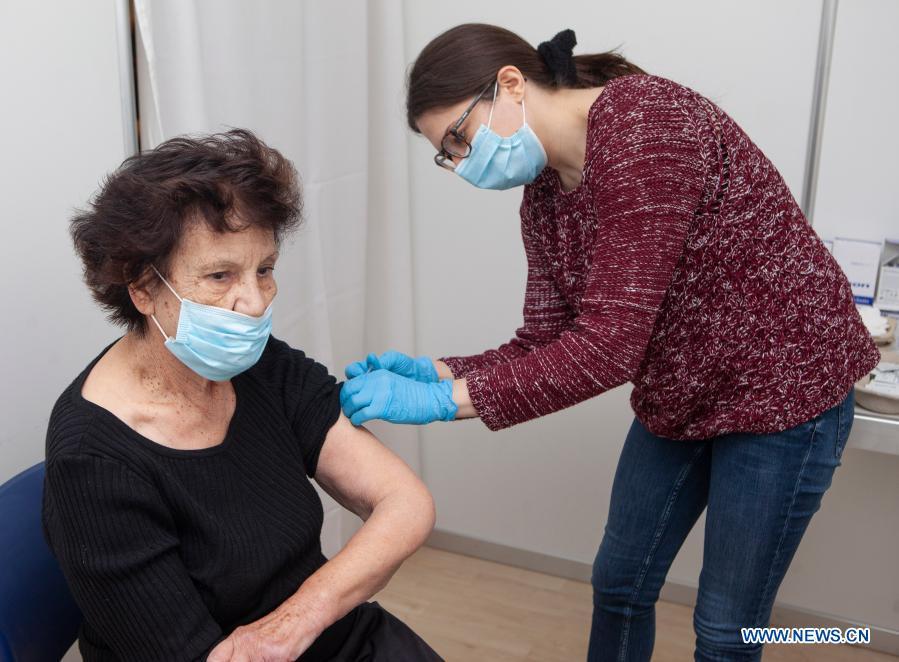 A woman receives a shot of the COVID-19 vaccine in Nicosia, Cyprus, Feb. 24, 2021. Cyprus' COVID-19 vaccination campaign is picking up speed as larger vaccine shipments were due to be delivered on Wednesday under the European Union's joint vaccine procurement scheme, a Health Ministry official said. (Photo by George Christophorou/Xinhua)

The decision was made even though the rate of infection is again on the rise in the country, Minister for Health Lena Hallengren said at a joint press conference.

"83 percent of all people living in nursing homes have received at least one dose. 70 percent have received both doses and are thus fully vaccinated," she said, showing a graph outlining the rate of infection.

While clearly on the rise in society in general, the rate of infection had decreased rapidly among nursing home residents over the last weeks.

"There are strong indications that vaccinations in nursing homes are an important explanation for this positive trend," Hallengren said.

She said that many nursing home residents had eagerly awaited since all visits were banned almost 11 months ago.

"Two weeks after receiving the second dose, it is possible to receive visits without special infection preventative measures. It is also possible to hug children or grandchildren if they are completely healthy and have no symptoms."

The announcement was made only a day after the government had introduced stricter restrictions to fend off a looming third wave of the pandemic.

By Thursday, at least 690,000 individuals in the country had received at least the first dose of vaccine, while 235,000 had received both doses.

Now, the vaccination program has been expanded to include younger elderly. "As the vaccinations continue, we can return a little more to a normal life," said Johan Carlson, Director-General of the Public Health Agency.

As the world is struggling to contain the pandemic, vaccination is also underway in Sweden and many other countries with the already-authorized coronavirus vaccines.

Meanwhile, 255 candidate vaccines are still being developed worldwide -- 73 of them in clinical trials -- in countries including Germany, China, Russia, Britain and the United States, according to information released by the World Health Organization on Tuesday.