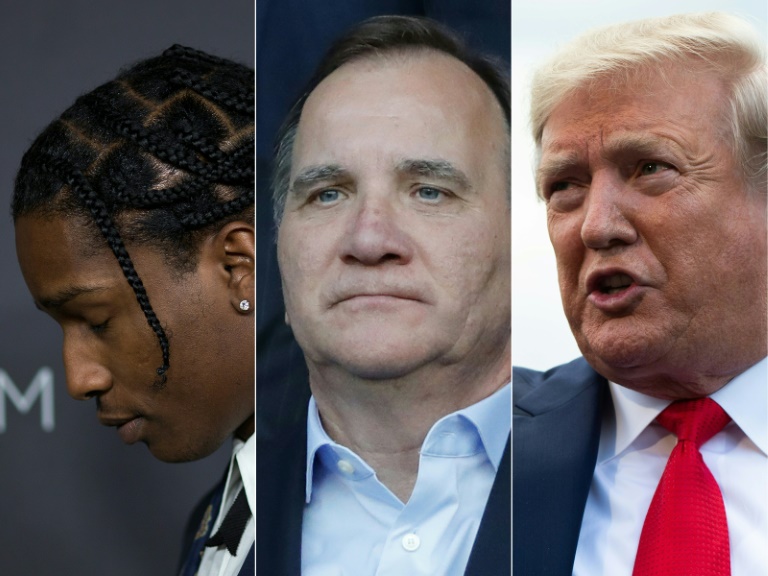 Swedish politicians Friday fired back at US President Donald Trump, after he rowed with Prime Minister Stefan Lofven over Sweden's move to press assault charges against American rapper A$AP Rocky.

Several Swedish politicians protested Trump's remarks, after the president took to Twitter on Thursday to express his frustration.

"Very disappointed in Prime Minister Stefan Lofven for being unable to act. Sweden has let our African American Community down in the United States," Trump tweeted, adding: "Give A$AP Rocky his FREEDOM."

He also tweeted "We do so much for Sweden but it doesn't seem to work the other way around."

But Swedish politicians were quick to offer rebuttals, with some highlighting that the charges against the rapper, stemming from a June street brawl in Stockholm, were laid by prosecutors and were not arbitrary.

"So, what is it you do for us MR President?," MEP Fredrick Federley tweeted.

Former prime minister Carl Bildt echoed earlier responses by the Swedish government and pointed to the independence of the Swedish judiciary.

In a comment to newspaper Aftonbladet, Bildt also commended the government for choosing not to engage, saying it was wise to avoid "mud wrestling with Trump".

All 'equal before the law'

Natali Sial, a spokeswoman for the Swedish government, said they did not have anything further to add after Trump's latest statements.

"In Sweden everyone is equal before the law. The White House has been informed of this. Now the judicial process will run its course," Sial told AFP.

Former US ambassador to Sweden Azita Raji also chimed in to show support for the Scandinavian nation.

"As Sweden leads by example in showing that everyone is equal before the law, the US struggles to show that no one is above the law," Raji wrote on Twitter.

The 30-year-old US rapper, whose real name is Rakim Mayers, was arrested on July 3 along with three other people following the brawl on June 30. One of the others, the rapper's bodyguard, was later released.

Mayers claims he acted in self-defence. But on Thursday prosecutor Daniel Suneson said he was pressing charges against Mayers and the two others "because in my judgement what has happened amounts to a crime, despite the objections about self-defence and provocations."

Part of the fight was captured in an amateur video published by US celebrity news outlet TMZ. The rapper later published videos of his own to Instagram purporting to show the lead-up to the fight.

But Suneson said he has "more material to consider than what has been available on the internet".

On July 5 the court ordered Mayers kept in custody pending investigation as he was considered a "flight risk".

Suneson's decision to press charges means the rapper can be kept in custody until his trial which is scheduled to take place over three days, starting on July 30.

Assault carries a maximum penalty of two years in jail in Sweden.

Since his arrest, fans, fellow artists and US Congress members have campaigned for his release.

An online petition called #JusticeForRocky has garnered more than 630,000 signatures.

On Tuesday one fan was arrested at the Swedish embassy in Washington after she allegedly damaged property and swore at staff in protest at the country's treatment of the rapper.

The musician, who had his breakthrough in 2011 with the release of the mixtape "Live. Love. A$AP", was on a European tour at the time of his arrest and has already had to cancel over a dozen shows.