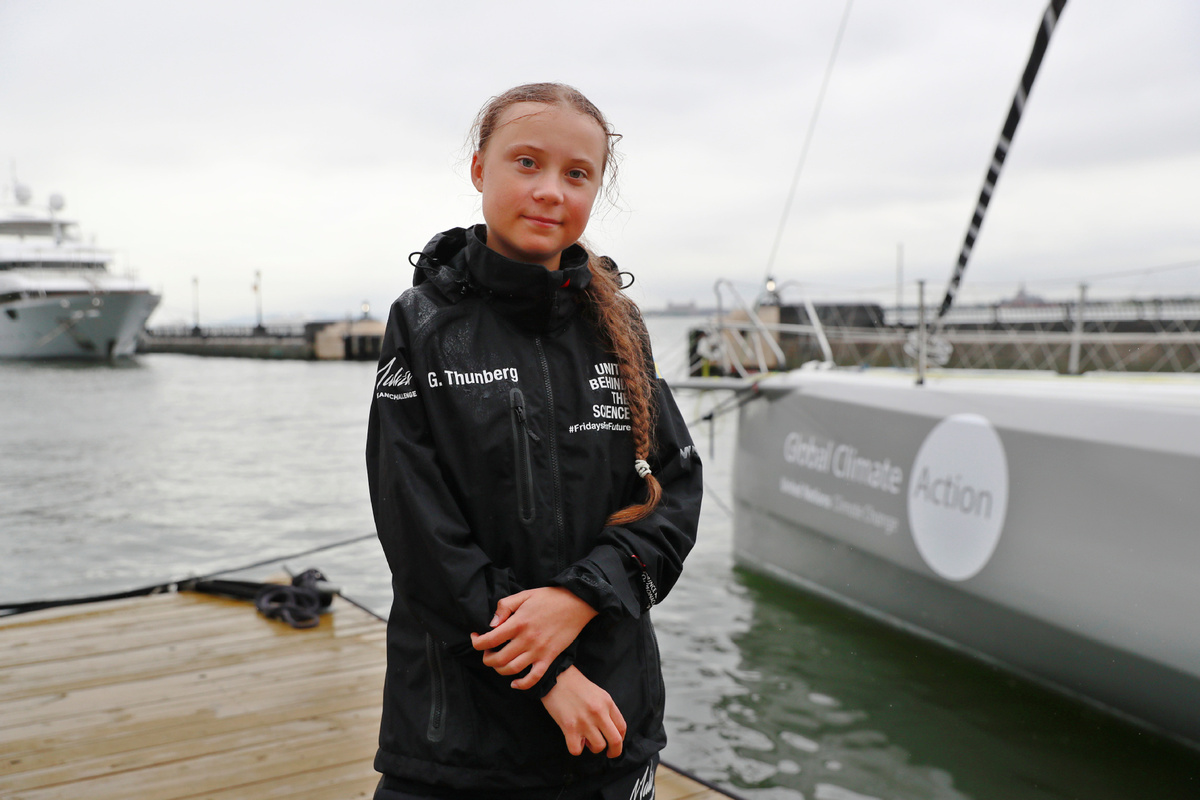 The 16-year-old Swedish schoolgirl, who set sail from Plymouth, England, on Aug 14, was greeted by cheers, chants and singing as her silver sailboat, the Malitzia II, cruised past the Statue of Liberty through choppy waves and rain to drop anchor in Manhattan's yacht harbor.

"All of this is very overwhelming and the ground is still shaking for me," a seemingly bashful Thunberg, clad in a dark blue jumpsuit, told a gathering of reporters and activists who greeted her and the crew of the Malitzia II on land.

"It's insane that a 16-year-old had to cross the Atlantic Ocean to make a stand on the climate crisis. This of course is not something I want everyone to do," she said.

Thunberg made her trans-Atlantic journey carbon emission-free by traveling on the 18.3-meter yacht, which is equipped with solar panels and underwater turbines that produce electricity onboard, along with a large black sail carrying the message: "Unite behind the science."

She is taking a year off school to pursue her activism. Her father, Svante Thunberg, crossed the ocean with her.

The ship is built for high-speed, offshore racing, and weight is kept to a minimum. There is no toilet - just a bucket - or fixed shower onboard, no windows below deck and only a small gas stove to heat up freeze-dried food.

Thunberg, who first drew international attention last year when she started missing school on Fridays to protest against political inaction on climate change, said she planned to take part in a demonstration outside the UN headquarters in New York on Friday.

But first, she said, she planned to: "Eat fresh food, not freeze dried, not be wet and to clean myself." Peppered with questions from reporters about her message for US President Donald Trump, a climate change skeptic, Thunberg suggested she was not interested in butting heads with the Republican leader.

"My message for him is just listen to the science, but he obviously doesn't do that. No one has been able to convince him of climate change, the urgency. Why should I be able to do that?" she said. "So I'm just going to focus on spreading awareness."

But far simpler things took precedence in her first hours in Manhattan. She said she can finally rest, take a shower and enjoy meals of "fresh vegetables, not freeze-dried food" like canned beans and corn.

In addition to the UN Climate Action Summit in New York, Thunberg intends to attend the COP 25 climate change conference in Santiago, Chile, in December, planning to make her way there without using air travel.