Switzerland's Green Party made historic gains in national elections on Sunday, while the anti-immigrant right-wing was on track to remain the largest party in parliament despite a slip in its support. 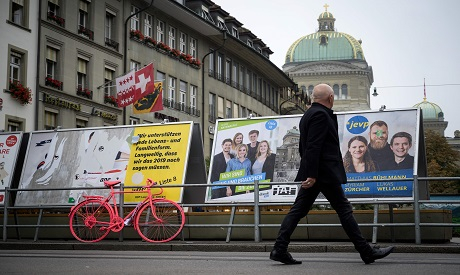 A man walks past electoral posters with the dome of the Swiss house of parliament in the background during Switzerland's general election, in Bern, October 20, 2019. (Photo: AFP)

Ballots were still being counted in the wealthy Alpine nation, but projections released by national broadcaster RTS confirmed the "green wave" forecast before the vote.

"We are tremendously pleased that the mobilization we saw on the streets has translated into votes. We are heading toward a historic score," she added.

The Greens garnered 13 percent support, exceeding their pre-election projection. It marked a six-point bump on their 2015 performance, according to the projection by RTS, political research firm Gfs Bern and national press agency ATS.

The Green Liberals – an environmentalist party with libertarian socio-economic policies – also gained ground, taking 7.6 percent of the vote compared to less than five percent in 2015.

The Swiss People's Party (SVP), which has repeatedly been accused of demonizing migrants, claimed 25.6 percent of the vote, according to the RTS projection.

The SVP is also the only major party that has not pledged to pursue bolder climate action, having consistently denounced "climate hysteria" in Swiss politics.

Aside from warning about the threats of immigration, the SVP has also built its brand by condemning the influence of the European Union in non-EU member Switzerland.

Speculation will now center on whether the Greens can force their way into the executive branch for the first time.

Under Switzerland's unique political system, the election decides the 200 lower house lawmakers and 46 senators elected to four-year terms, but the make-up of the executive Federal Council will not be decided until December.