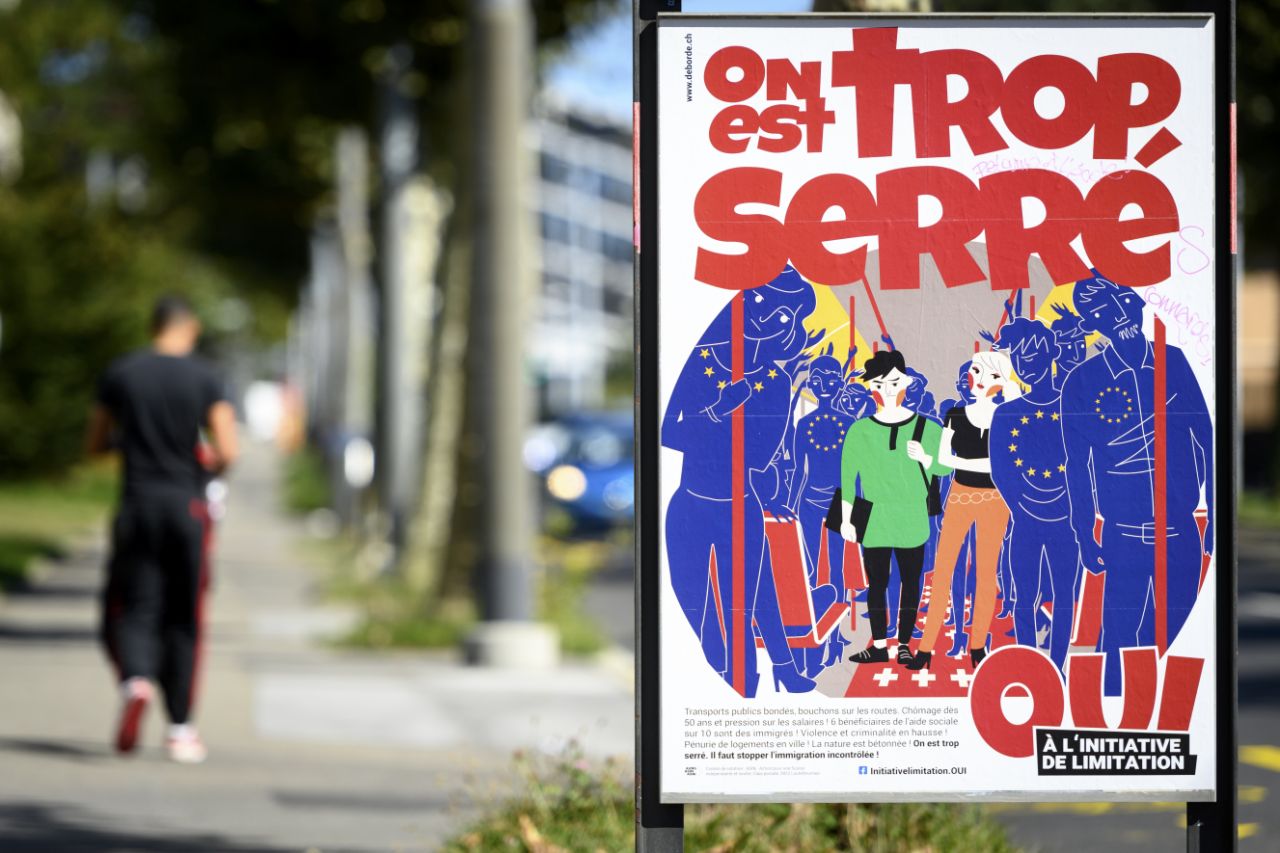 A poster of the Swiss People's Party (SVP) for a moderate immigration initiative reading "we're too tight!" is displayed in a street in Lausanne, Switzerland, September 8, 2020. (Photo: AP)

Voters in Switzerland cast ballots Sunday on a nationalist party's proposal to limit the number of European Union citizens allowed to live and work in their country.

The measure, championed by the populist Swiss People's Party, would give preferential access to jobs, social protection and benefits to people from Switzerland over those from the 27-nation bloc that surrounds it.

If passed, the proposal would further strain the rich Alpine's country's deep and lucrative ties to the EU, of which it isn't a member. It could also lead to reciprocal disadvantages for millions of Swiss citizens if they want to live or work in the EU.

Roughly 1.4 million EU citizens live in the country of about 8.2 million, while around 500,000 Swiss live in EU countries.

In a similar referendum in 2014, the Swiss narrowly voted in favor of limiting access of EU citizens to live and work in Switzerland. Lawmakers, however, refused to fully implement the referendum fearing a hefty impact on Swiss society and businesses, prompting the People's Party to get the issue back on the ballot again this year.

Since the last vote, Switzerland has witnessed the personal and professional turmoil that Britain's 2016 referendum to leave the European Union has caused, especially for EU citizens in the UK and Britons living on the continent. Britain left the EU in January, but is in a transition period until the end of the year.

Recent polls suggest there's less support in Switzerland to limit free movement with the EU this time around. A September 7 survey by gfs.bern polling agency found that more than 60 percent of respondents were against it, some 35 percent backed it and the rest were undecided.

The freedom-of-movement measure is being considered alongside nationwide votes on paternity leave, tax breaks for child care, purchases of up to six billion francs (about 6.5 billion U.S. dollars) worth of new fighter planes by 2030, and the right to hunt wolves to keep their population down.