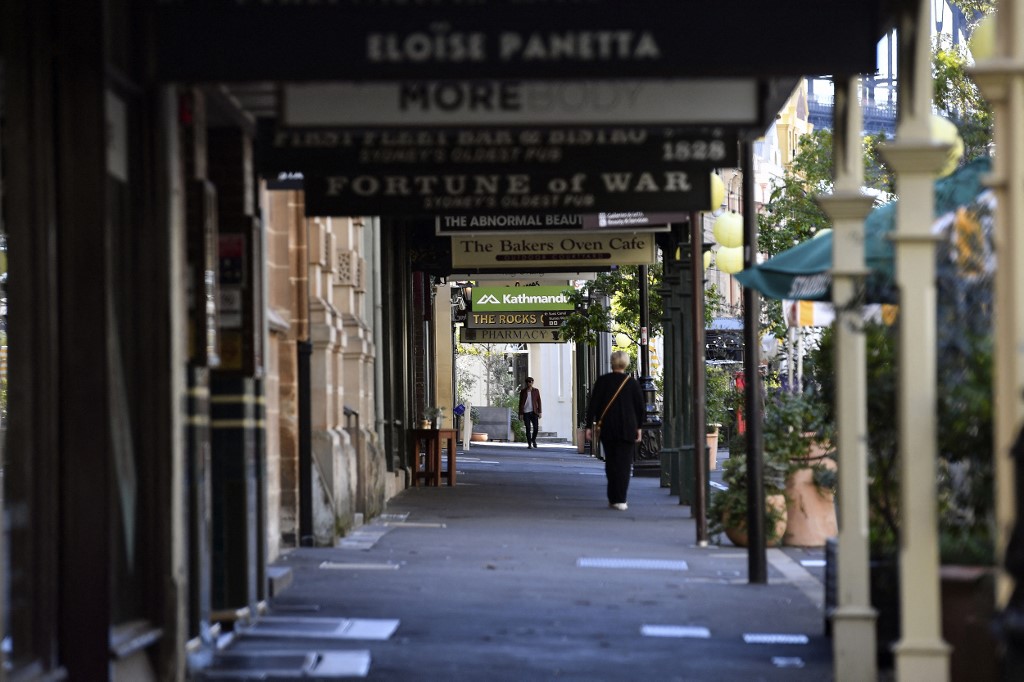 A general view shows the usually-busy tourist area 'The Rocks' in Sydney on June 26, 2021, as Australia's largest city entered a two-week lockdown to contain an outbreak of the highly contagious Delta variant. (Photo: AFP)

More than 80 Covid-19 cases have been reported so far in an infection surge linked to an international flight crew transported to a quarantine hotel from the airport.

The flare-up was a shock for a city that had returned to relative normality after months with very few local cases.

More than five million people across Sydney are subject to the movement restrictions, in addition to hundreds of thousands of others living in nearby coastal communities and the Blue Mountains towns that divide the city from Australia's farming hinterland.

The lockdown had originally only applied to Sydney's business district and affluent eastern suburbs, but the spread of the outbreak elsewhere pushed authorities to take a more drastic step.

"When you have a contagious variant, like the Delta virus, a three day lockdown doesn't work -- if we're going to do this we need to do it properly," said Gladys Berejiklian, the premier of New South Wales state.

"Transmissibility is at least double what previous variants have been so we do need to brace ourselves for a potentially large number of cases in the following days," she added.

Health officials across the world have been alarmed by the rapid spread of the Delta variant first seen in India, noting instances of people passing on the virus during fleeting encounters in shops and then quickly infecting close family contacts.

The current restrictions require people to stay home for at least two weeks, only venturing out to purchase essential goods, obtain medical care, exercise, go to school or if they are unable to work from home.

Authorities in Sydney had earlier Saturday flagged a string of new possible virus exposure sites, including a popular city bar, in addition to the scores of businesses and public places already identified as risks.

Restrictions for the entire state outside of the lockdown have been announced, including mandatory mask-wearing indoors and limits on gatherings.

"No matter what defensive steps were taking at the moment, the virus seems to understand how to counter-attack."

Anyone outside of the lockdown who had visited Sydney since Monday was also instructed to self-isolate for 14 days.

The city is experiencing the latest in a string of snap "circuit-breaker" lockdowns across major population centres around Australia, with most cases linked to returning travellers held in hotel quarantine.

Australia has been among the world's most successful countries in containing Covid-19, with just over 30,000 cases and 910 deaths in a population of about 25 million.