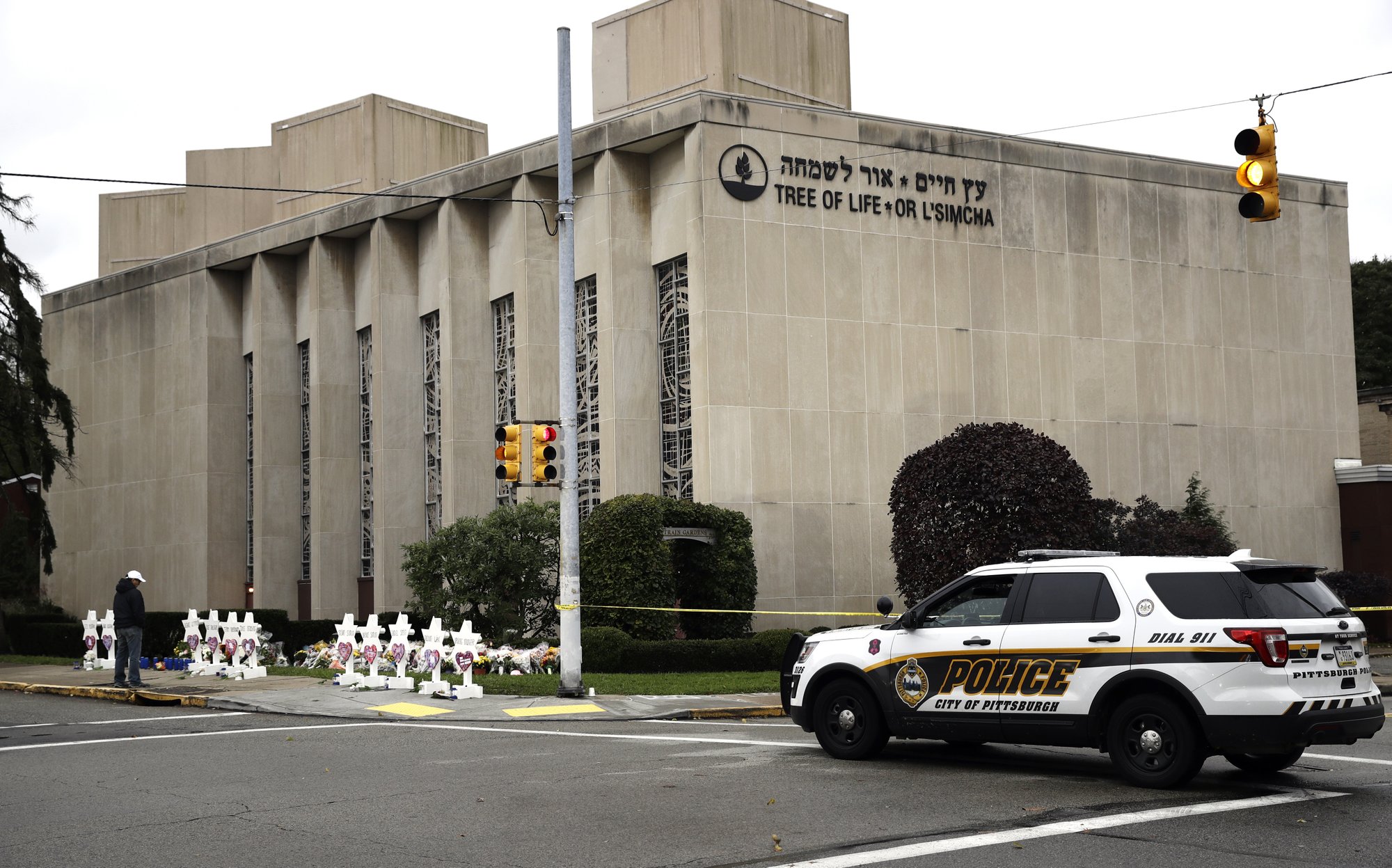 A police vehicle is posted near the Tree of Life/Or L'Simcha Synagogue in Pittsburgh, Monday, Oct. 29, 2018. (Photo: AP)

The man accused in the Pittsburgh synagogue massacre appeared briefly in federal court in a wheelchair and handcuffs Monday to face charges he killed 11 people in what is believed to be the deadliest attack on Jews in US history.

Robert Gregory Bowers, who was wounded in a gun battle with police during the shooting rampage, was released from a hospital in the morning and a few hours later was wheeled into the courtroom, where he was ordered held without bail for a preliminary hearing on Thursday, when prosecutors will outline their case against him.

During the court appearance, Bowers talked with two court-appointed lawyers, went over documents and confirmed his identity to a judge, saying little more than “Yes” in a soft voice a few times. Courtroom deputies freed one of his hands from cuffs so he could sign paperwork. He did not enter a plea.

“It was not the face of villainy that I thought we’d see,” said Jon Pushinsky, a congregant at Dor Hadash, which lost one of its members to the massacre. Pushinsky was one of two Dor Hadash congregants at the hearing.

Federal prosecutors set in motion plans to seek the death penalty against the 46-year-old truck driver, who authorities say expressed hatred of Jews during the rampage and later told police, “I just want to kill Jews” and “All these Jews need to die.”

After the hearing, US Attorney Scott Brady called the shootings “horrific acts of violence” and added: “Rest assured we have a team of prosecutors working hard to ensure that justice is done.”

The first funeral — for Cecil Rosenthal and his younger brother, David — was set for Tuesday.

Barry Werber, 76, said he found himself hiding in a dark storage closet as the gunman tore through the building.

“I don’t know why he thinks the Jews are responsible for all the ills in the world, but he’s not the first and he won’t be the last,” Werber said. “Unfortunately, that’s our burden to bear. It breaks my heart.”

The White House announced President Donald Trump and first lady Melania Trump will visit Pennsylvania on Tuesday “to express the support of the American people and to grieve with the Pittsburgh community.”

The response to Trump’s plans to visit has been mixed.

Leaders of a liberal Jewish group in Pittsburgh wrote an open letter to the president, saying he was not welcome until he denounced white nationalism. But Rabbi Jeffrey Myers with the Tree of Life synagogue made clear Trump would be welcome, telling NBC, “It would be my honor to always meet a president of the United States.”

The weekend massacre — which took place 10 days before the midterm elections — heightened tensions around the country, coming just a day after the arrest of the Florida man accused of sending a wave of pipe bombs to Trump critics.

The mail bomb attacks and the bloodshed in Pittsburgh set off debate over whether the corrosive political climate in Washington and beyond contributed to the violence and whether Trump himself bears any blame because of his combative language.

Werber noted that the president has embraced the politically fraught label of “nationalist.” He said the Nazis were nationalists.

“It’s part of his program to instigate his base,” Werber said, and “bigots are coming out of the woodwork.”

He was charged in a 29-count federal criminal complaint that included counts of obstructing the exercise of religious beliefs resulting in death — a hate crime — and using a gun to commit murder.

Just minutes before the synagogue attack, Bowers apparently took to social media to rage against HIAS, a Jewish organization that resettles refugees under contract with the US government.

“HIAS likes to bring invaders in that kill our people,” he is believed to have written on Gab.com, a social media site favored by right-wing extremists. “I can’t sit by and watch my people get slaughtered. Screw your optics, I’m going in.”

HIAS had recently weighed in on the migrant caravan heading toward the US from Central America, urging the Trump administration to “provide all asylum seekers the opportunity to present their claims as required by law and treat all migrants fairly and humanely.” The president has vilified the caravan and pledged to stop the migrants.

One of the targets of the mail bomb attacks last week was liberal Jewish philanthropist George Soros, who has been accused by far-right conspiracy theorists of paying migrants to join the caravan.

Three congregations were conducting Sabbath services in the synagogue when the attack began just before 10 a.m. in the tree-lined residential neighborhood of Squirrel Hill, the historic hub of the city’s Jewish community .

Speaking at a vigil in Pittsburgh on Sunday night, Myers, the Tree of Life rabbi, said about a dozen people had gathered in the main sanctuary when Bowers walked in and began shooting. Seven of his congregants were killed, he said.

“My holy place has been defiled,” he said.

In the basement, four members of New Light congregation were just starting to pray — with two others in the kitchen — when they heard crashing coming from upstairs, looked out the door and saw a body on the staircase, Werber recalled in an interview.

Rabbi Jonathan Perlman closed the door and pushed them into a large supply closet, he said. As gunshots echoed upstairs, Werber called 911 but was afraid to say anything for fear of making any noise. When the shots subsided, he said, another congregant, Melvin Wax, opened the door, only to be shot.

“There were three shots, and he falls back into the room where we were,” Werber said. “The gunman walks in.”

Apparently unable to see Werber and the other congregants in the darkness, Bowers walked back out.

Werber called the gunman “a maniac” and “a person who has no control of his baser instincts.”

The youngest of the 11 dead was 54, the oldest 97. The toll included a husband and wife, professors, dentists and physicians.

Bowers shot his victims with an AR-15, used in many of the nation’s mass shootings, and three handguns, all of which he owned legally and had a license to carry, according to a law enforcement official who wasn’t authorized to discuss the investigation and spoke on condition of anonymity.

Bowers was a long-haul trucker who worked for himself, authorities said. Little else was known about Bowers, who had no apparent criminal record.