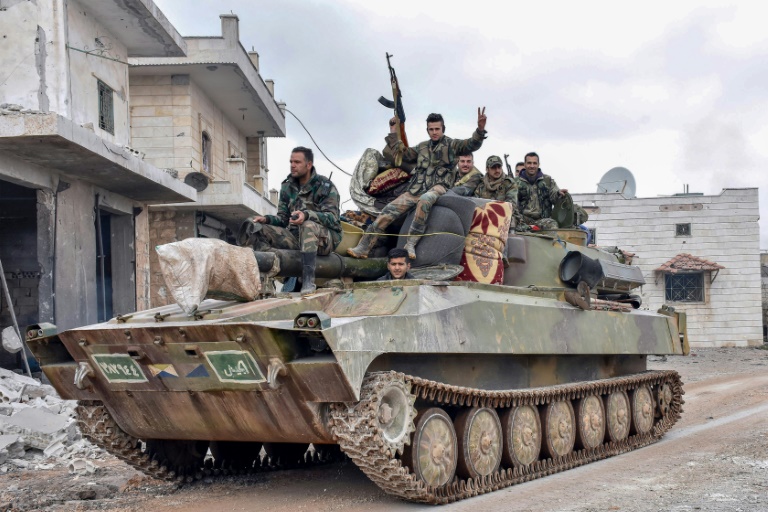 Syrian troops pass through a recaptured village in their final push on the strategic highway town of Maaret a-Numan, held by the rebels for seven years. (Photo: AFP)

The M5 artery has long been in the sights of the government as it seeks to revive a moribund economy ravaged by almost nine years of war.

"Our forces managed in the past few days to stamp out terrorism in many villages and towns," including Maaret al-Numan, an army spokesman said.

In 2011, Maaret al-Numan was one of the first towns in the northwestern province of Idlib to rise up against the Damascus government.

The following year, it was captured by rebels fighting against President Bashar al-Assad's rule.

It is the latest town to fall in a Russian-backed offensive on the Idlib region this year.

The region, which hosts some three million people, is dominated by jihadists from Syria's former Al-Qaeda affiliate, but allied rebels are also present.

The government has slowly chipped away at the south of the bastion, despite several deals between government ally Russia and rebel backer Turkey intended to avert a broad military offensive.

It was a rare critical remark from Erdogan who has largely sought to keep good relations with Russian President Vladimir Putin since a 2016 rapprochement.

Tens of thousands of civilians have fled the government's advance on the south of the province in recent weeks, seeking safety closer to the Turkish border further north.

The violence in the northwest has displaced more than 388,000 civilians since December, the United Nations says.

"We are alarmed for the safety and protection of over three million civilians in Idlib and surrounding areas," said David Swanson of the UN's humanitarian coordination office, OCHA.

In areas north of Maaret al-Numan, bombardment by government ally Russia has prompted a fresh wave of displacement in recent days, with hundreds of vehicles cramming a key exit route, AFP correspondents reported.

Aid groups have warned the latest violence is compounding one of the worst humanitarian disasters of the nine-year war.

Government forces, which now control around 70 percent of Syria, have repeatedly vowed to retake the entire country, including Idlib.

After Maaret al-Numan's recapture, the Syrian army was bent on continuing the fight "until all Syrian soil has been cleansed of terrorism", it said in a statement.

On Wednesday, loyalist forces swept the town for booby traps and unexploded ordnance after all rebels were either killed or withdrew, the Syrian Observatory for Human Rights said.

The town was once a defiant hotspot for anti-Assad protests, drawing in crowds from surrounding villages, but today its streets are largely empty.

It is home to a museum of Roman and Byzantine-era mosaics, which volunteers sought to protect with sandbags through years of war.

What remains of rebel-held territory includes more than half of Idlib province, as well as slivers of adjacent Aleppo and Latakia.

Government forces and rebels were locked in clashes in the south of Aleppo province on Wednesday, the Britain-based Observatory said.

State news agency SANA said government forces on Wednesday gained ground against rebels and jihadists in the al-Rashideen area in the province's west.

To the north of Maaret al-Numan, the front line had been pushed back to within 10 kilometers (six miles) of Saraqeb, the next town on the M5 highway, its director Rami Abdel Rahman said.

Government forces have recaptured around 27 towns and villages from their rivals in southern Idlib since January 24.

The civil war has killed more than 380,000 people and displaced more than half the country's population since it erupted following the brutal repression of anti-government protests in 2011.

Several UN-backed rounds of peace talks have failed to stem the bloodshed and a parallel track led by regime backer Russia and rebel ally Turkey has gained precedence in recent years.

A long-awaited committee to draw up a post-war constitution for Syria met in October in Geneva, but Pedersen has acknowledged it made little progress.