Syria cease-fire off to rocky start amid reports of fighting 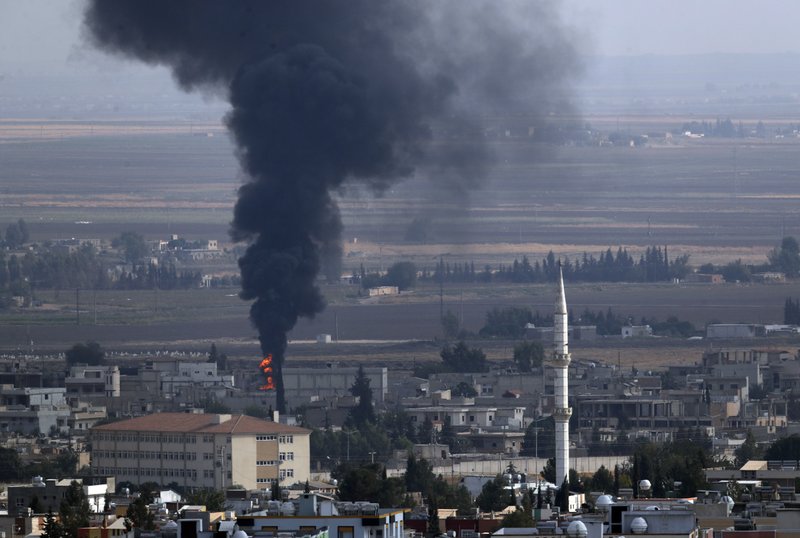 In this photo taken from the Turkish side of the border between Turkey and Syria, in Ceylanpinar, Sanliurfa province, southeastern Turkey, smoke billows from a fire in Ras al-Ayn, Syria, Friday, Oct. 18, 2019. (Photo: AP)

The cease-fire in northern Syria got off to a rocky start Friday, as Kurdish leaders accused Turkey of violating the accord with continued fighting at a key border town while casting doubt on provisions in the US-brokered deal with Ankara.

Turkey’s president warned that Turkish forces would go back on the attack in four days unless Kurdish-led fighters withdraw “without exception” from a zone 20 miles (30 kilometers) deep in Syria running the entire 260-mile (440-kilometer) length of the border.

“Without exception, if the promise is not fulfilled, Operation Peace Spring will resume the minute the 120 hours end with even more determination,” President Recep Tayyip Erdogan told journalists in Ankara.

There was no sign of any pullout by the Kurdish-led forces. They say the deal only covers a much smaller section of the border, about 125 kilometers (75 miles) and haven’t committed to pull out from anywhere.

Some fighters have vowed not to withdraw, calling the accord an “insult to Kurdish dignity” and tantamount to a surrender arranged by the US, the former ally that abandoned them to the Turkish assault.

The Kurdish self-administration said some provisions of the cease-fire deal “need further discussion with the United States,” though it did not specify what. A senior Kurdish politician, Ilham Ahmed, was due in Washington over the weekend to meet US officials.

The cease-fire agreement — reached in negotiations between Erdogan and US Vice President Mike Pence — requires the Kurdish fighters to vacate a swath of territory in Syria along the Turkish border. That effectively means the Kurds would grant Turkey its goals in the offensive and consecrate its control of territory it captured.

Criticism mounted for a deal that President Donald Trump called “a great day for civilization.”

EU Council President Donald Tusk said it was “not a cease-fire, it is a demand for the capitulation of the Kurds” and called on Turkey to immediately halt its operation in northeast Syria. French President Emmanuel Macron called the Turkish operation “madness.”

The US pullout from northeastern Syria has positioned Russia as the main power broker.

Erdogan is to meet Russian President Vladimir Putin in Sochi, Russia, on Tuesday, the day the halt in fighting runs out.

After being abandoned by the Americans, the Kurds agreed with Moscow to allow Syrian President Bashar Assad’s forces to deploy along the border with Turkey to halt the invasion. Syrian forces have already moved into several sites previously under Kurdish control.

Ahmed, the Kurdish official, said the cease-fire deal doesn’t impact the agreement with Russia and Damascus.

The Syrian government deployment, although not complete, puts Russia as the ultimate arbiter of the arrangements along much of the Syrian-Turkish border.

The border town of Ras al-Ayn was emerging as an immediate test of whether the halt in violence can take hold. Before the deal’s announcement, Turkish-backed forces had encircled the town and were battling fierce resistance from Kurdish fighters inside.

Turkish shelling hit in and around Ras al-Ayn on Friday morning, raising columns of smoke seen by an Associated Press journalist in Ceylanpinar on the Turkish side of the border, but none was seen after 10:30 a.m., and only sporadic gunfire was heard from inside the town.

The Britain-based Syrian Observatory for Human Rights and the Rojava Information Center said fighting continued into the afternoon as Turkish-backed Syrian fighters clashed with Kurdish forces in villages on the outskirts of Ras al-Ayn. The Kurdish-led force said five of its fighters were killed and a number of civilians wounded in a strike on one of the villages.

Other activists reported a new exodus of civilians from the villages. Gun battles and shelling continued around a hospital in the center of Ras al-Ayn, and those injured inside could not be evacuated, said Mustafa Bali, spokesman for the Kurdish-led Syrian Democratic Forces. The Kurdish Red Crescent said it was unable to enter the town to evacuate the wounded because of fighting.

Fighting quieted around 4 p.m., and the calm continued into nightfall, Kurdish fighters said.

The Kurdish-led administration said Turkey “has not adhered with the cease-fire until now in some areas,” particularly in Ras al-Ayn.

But Trump and Erdogan insisted it was working,

Trump said in a tweet that he spoke Friday with Erdogan who said there had been some “minor sniper and mortar fire” that was quickly stopped. “There is goodwill on both sides,” Trump added.

The commander of the Kurdish-led force, Mazloum Abdi, said Thursday night that it would abide by the cease-fire and “do our best to make it successful.” He did not mention any withdrawal.

A force spokesman, Mervan, said “so far” there is no plan for withdrawal from Ras al-Ayn because of the continuing siege.

A member of the Syrian Kurdish force rebuffed calls for a pullback from border towns, calling the US deal with Turkey an “insult” that would in “no way” work. He derided the idea that the Kurds would hand their land over and questioned the US ability to enforce the deal “without any presence on the ground.” He spoke on condition of anonymity because he was not authorized to speak to reporters.

No fighting was heard elsewhere Friday along the stretch of the border that has been the main theater of the Turkish assault, running from Ras al-Ayn about 75 miles (125 kilometers) west to the Turkish-held town of Tal Abyad. Kurdish fighters have already been driven out of much, but not all, of that territory.

The Kurds were US allies in the fight against the Islamic State since 2014, but Turkey considers the Kurdish fighters terrorists because of their links to outlawed Kurdish rebels fighting inside Turkey since the 1980s.