Syria force carries out major evacuation from last IS holdout 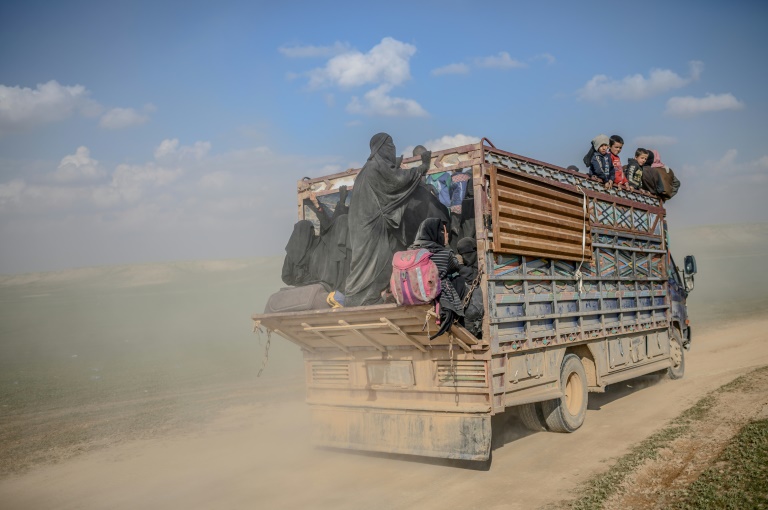 US-backed Syrian forces are preparing for new evacuations of civilians from the last jihadist redoubt in Syria as they press for a final assault to defeating IS (Photo: AFP)

US-backed forces evacuated over 40 truckloads of people from the Islamic State group's last Syria redoubt on Monday, as they sought to clear out civilians before a final push to crush the jihadists.

The Syrian Democratic Forces (SDF) have slowed down their offensive on the final pocket due to the presence of civilians, with just a scrap of the IS "caliphate" remaining from a territory that once spanned Syria and Iraq.

One vehicle was packed with women clad in black and men who covered their faces. Wounded people were also among the latest evacuees.

Holdout IS fighters and civilians, mostly relatives of jihadists, are trapped in less than half a square kilometre in the village of Baghouz near the Iraqi border.

The Kurdish-led SDF evacuated nearly 5,000 men, women and children from the jihadist redoubt on Wednesday and Friday, but none over the weekend.

Earlier on Monday, SDF spokesman Mustefa Bali, told AFP that thousands remained inside the IS pocket.

"According to what we heard from those who have left, there are nearly 5,000 people still inside," Bali said.

At the SDF screening point outside the village, SDF fighters expressed hopes that Monday's arrivals would be the last one.

"Every day we say today is the day but we hope it will all end today and not tomorrow," he said.

Kurdish foreign affairs official Abdel Karim Omar told AFP on Monday that the SDF will announce the end of the IS proto-state "in the next few days".

"But this does not mean that we have eliminated terrorism, which must be eradicated at the roots," he said.

Beyond Baghouz, IS still has thousands of fighters and sleeper cells across several countries.

In Syria, it retains a presence in the vast Badia desert, and the jihadists have claimed deadly attacks in SDF-held territory.

Thousands of suspected IS fighters have attempted to blend in with civilians fleeing the crumbling "caliphate".

According to the Britain-based Syrian Observatory for Human Rights, around 46,000 people, including thousands of jihadists, have streamed out of the Baghouz pocket since early December.

The SDF screens those exiting at an outpost outside the village to weed out potential IS fighters.

After being vetted, women, children, and men not suspected of belonging to the extremist group are transported north to the Kurdish-run camp of Al-Hol, while suspected jihadists are sent to SDF-held detention centres.

The Observatory on Monday said that 1,400 people, mainly IS relatives, were secretly transported from orchards on the outskirts of Baghouz to neighbouring Iraq over the past 24 hours.

Kurdish foreign affairs official did not confirm the transfer, but denied that the SDF was responsible.

"In principle, we do not hand over any person passing through our territories to Iraqi authorities or any other party," Omar said.

Such transfers can only happen if they were trucked from Baghouz "by another party", he explained, without specifying.

Baghdad on Sunday said the SDF have transferred 280 Iraqi nationals accused of fighting alongside IS to Iraqi authorities.

Fourteen suspected French jihadists were among those transferred, an Iraqi government source told AFP on Monday.

Hisham al-Hashemi, an Iraqi expert with intimate knowledge of the issue, said the transfer had taken place in coordination with the US-led coalition fighting IS.

The mass outpouring of men, women and children from the IS foothold has overwhelmed the Kurdish-run Al-Hol camp, six hours north of Baghouz.

"The international community is not currently taking responsibility towards the large number of people leaving the last IS pocket, especially children," Omar said.

The International Rescue Committee said Friday that new arrivas had pushed the camp's population to over 45,000, exacerbating already dire conditions at the crammed facility.

At least 78 people, mostly children, have died on the way to the camp or shortly after arriving in recent weeks, the IRC said.

A warehouse fire on Friday caused by a gas cylinder explosion "destroyed 200 family tents" and five larger ones and injured 16 workers, it said.

The UN's humanitarian coordination office OCHA on Friday warned the camp was struggling to keep up with the flood of evacuees.