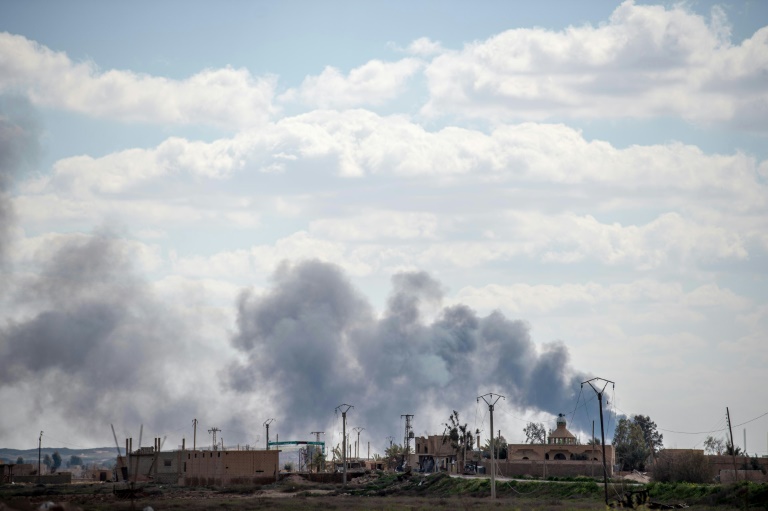 Islamic State group fighters holed up in Baghouz, the last sliver of the once-sprawling "caliphate" that their leader Abu Bakr al-Baghdadi proclaimed in 2014, responded with small arms fire as the Syrian Democratic Forces advanced.

AFP reporters near the front line saw explosions lighting up the sky over the eastern Syrian farming village after an airstrike hit an underground ammunition depot.

The crackle and thud of gunfire and shelling filled the air, as did plumes of thick black smoke over Baghouz, a small cluster of ruined buildings nestled in a palm-lined bend of the Euphrates.

"There are tunnels. We're not sure how many members of the Islamic State are still inside," an SDF commander said from a rooftop about 400 metres from the front line.

"They are completely besieged. They have planted many explosive devices in the houses and on the roads," he said. 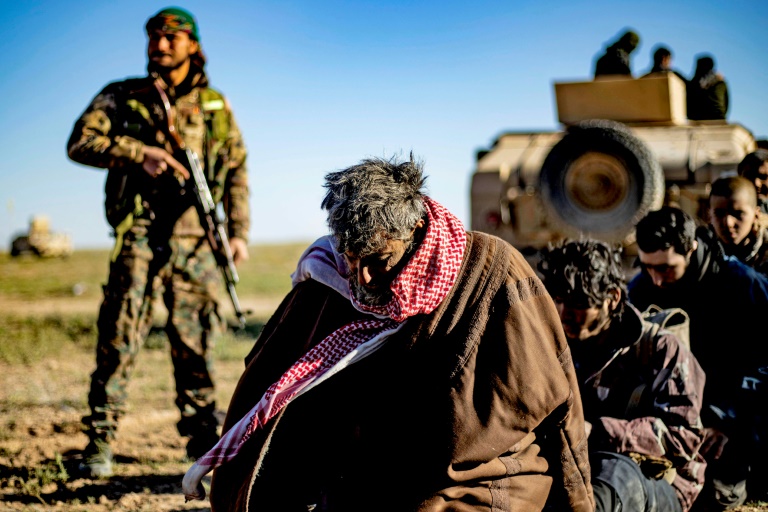 The jihadists' last redoubt was said to be about half a square kilometre in size a week ago and it shrank even further with the last few hours of fighting.

The SDF had in recent days maintained a buffer of about one kilometre (0.6 miles) between their forces and the holdout jihadists hunkered down in their final bastion.

But they resumed their advance on Friday evening after processing what they said was the last batch of civilians, mostly jihadists' relatives, fleeing the enclave. 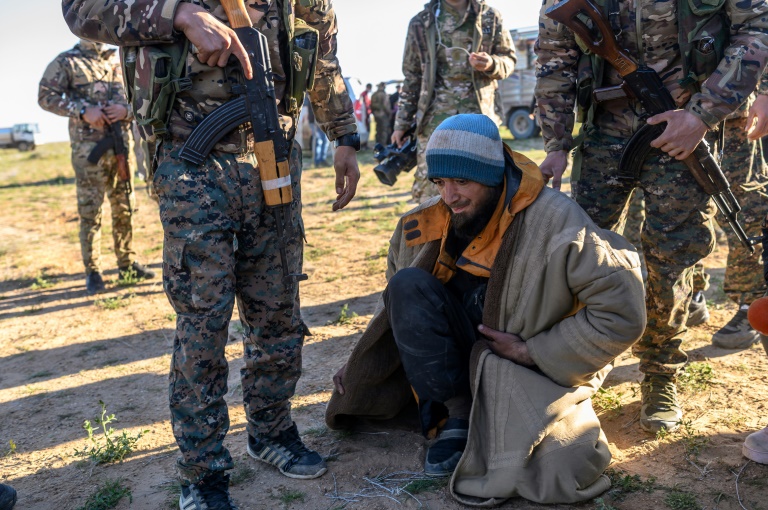 The jihadists are massively outnumbered and unlikely to hold out very long against the SDF, who launched their broad offensive on remaining IS strongholds in the Euphrates Valley six months ago.

The capture of Baghouz would mark the end of IS territorial control in the region and deal a death blow to the "caliphate", which once covered huge swathes of Syria and Iraq.

At its peak more than four years ago, the proto-state created by IS was the size of Britain and administered millions of people, including two million in Iraq's second city of Mosul.

It minted its own currency, levied taxes, published a wide array of propaganda material and designed its own school curricula.

The caliphate effectively collapsed in 2017 when IS lost most of its major cities in both countries.

The loss of Baghouz, which the SDF says is only days away, would carry mostly symbolic value.

The latest military operation has nonetheless sparked a major humanitarian emergency, with thousands of people of various nationalities emerging from the ruins of the "caliphate" and washing up in Kurdish-run camps.

The SDF thrust forward on Saturday and closer combat ensued at night, with tracer ammunition flashing glimpses of the battle ripping the village apart. 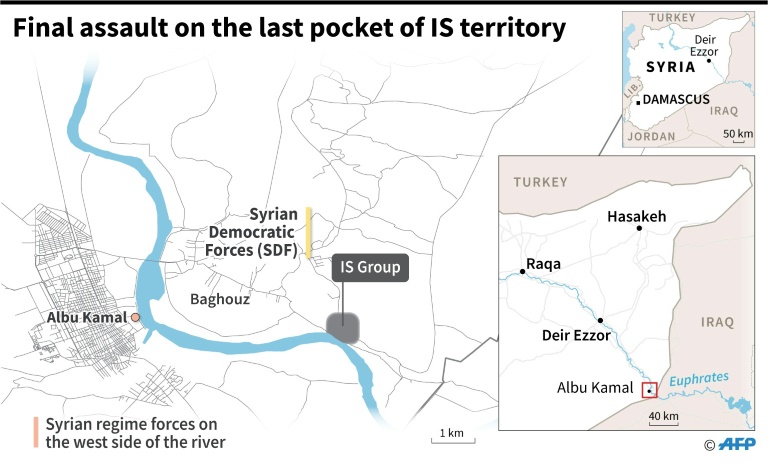 Perched on a rooftop some distance away, an SDF commander who gave his name as Rustom Hasakeh listened to details on an IS position coming in on his walkie-talkie.

He entered the GPS coordinates on his tablet and called in a strike. Moments later, a coalition fighter jet appeared in the sky and an explosion was heard in the distance.

"Daesh (IS) position: gone," Hasakeh said, looking up from his tablet with a smile.

"Since the start of the fighting, we have taken 13 or 14 positions from them," the commander told an AFP reporter outside Baghouz early Sunday.

"We can hear their conversations on the radio. Some of them communicate in Russian," he said. 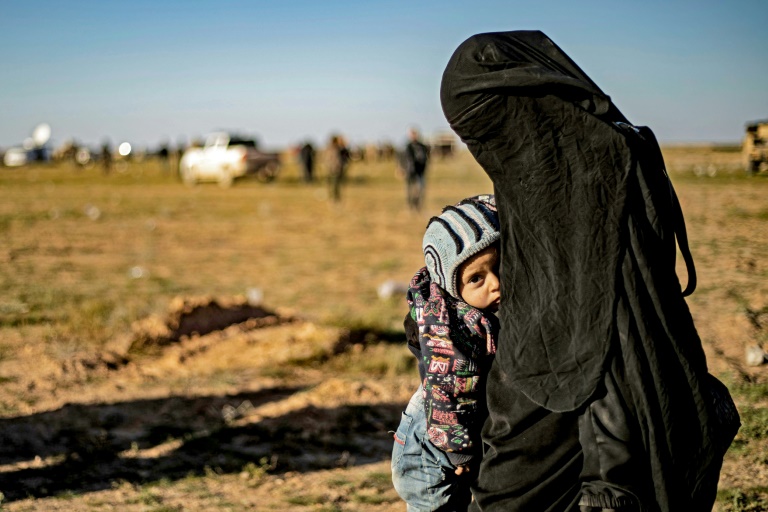 Women and children wait to be searched by the Syrian Democratic Forces after leaving the Islamic State group's last patch of territory. (Photo: AFP)

Hasakeh said the jihadists were launching suicide attacks with every possible vehicle they could find: cars, motorbikes and even bicycles.

IS had used civilians as human shields against air strikes in Baghouz, holding thousands huddled in a makeshift camp on the edge of the village, according to evacuated families.

"The IS members who are besieged are refusing to surrender, most of them are foreigners, including from France," Hasakeh said.

The SDF has said that those who did not use last week's humanitarian window to be evacuated were essentially chosing to die in Baghouz.

The families of several French jihadists contacted in France by AFP said however that women and children remained in the enclave.

According to the Syrian Observatory for Human Rights monitoring group, around 10 percent of the people who left IS bastions this year were suspected jihadist fighters trying to slip back into civilian life.

The area's Kurdish administration has been overwhelmed by the influx of "caliphate refugees", forced as they were to screen a large population in a short time.

On Saturday, they announced the release of 283 Syrians who had been suspected of belonging to IS but were found, after more investigation, to have "no blood on their hands".